A recent incident in Franklin Forks, Pennsylvania, demonstrates just how easily the record can be distorted on natural gas development by special interests determined to exploit accusations, assertions and speculation as if they were facts.

Some folks reading the title “Guilty until Proven Innocent” might not catch the error in this statement.

Public opinion has become the new justice system as a mob mentality seems to have taken over. Too often, though, the opinion, unfortunately, is not from research, but from groups who are employed to change public opinion (e.g., NRDC, Food & Water Watch, Sierra Club). These environmental groups seen have no boundaries. A once respected driven cause has now gained enough power to work the opposite of its original intent, damaging those who operate on legitimate foundations.

I’ll use just one example. Google “Franklin Forks, PA.” It’s a small town like its neighbor Dimock. Until recently few ever heard of either place. Franklin Forks has a State Park called Salt Springs. Mostly, it’s noted for bubbling methane (better known as natural gas) in the spring water.  However, when you google Franklin Forks you’re not going to see this state park on the first or the second page of listings. What you will find is the story of the Manning family and their supposedly contaminated water well. It was all over the TV, internet, and newspapers.

The Village of Oxford, New York village board went to the Manning’s residence. This became, with the help of a group labeling themselves modestly as the “Oxford Visionaries,” the excuse for enacting a ban on surface drilling in the Village of Oxford. That fueled the flame for the “Oxford visionaries,” headed up by two new (aren’t they always) local residents of Oxford named Irving Hall and Mina Takahashi.  They used the Manning story as their ah hah moment for signing up people onto a petition. “Do you want contaminated water like the Manning’s? Sign here.

Local extremist Peter Hutlberg from Plymouth, New York, also located in Chenango County, brought the Manning family to the town board meeting where they told how the industry supposedly destroyed their water. I was at that meeting and asked if they shared the same  aquifer as Salt Springs State Park a few miles away? Mr. Manning only replied  that this was an easy comment to make.

Yoko Ono recently did a bus tour to the Manning residence to help promote Artists Against Fracking. Vera Scoggins, a Pennsylvania activist, was the point person for that tour (and others) exploiting the Manning family as the poster child of what will happen to your water. She repeatedly claims water wells and streams are contaminated from the natural gas industry’s operations, although, as the inset next to the picture of Tammy Manning shows, there was a lot more to the story to come out later. 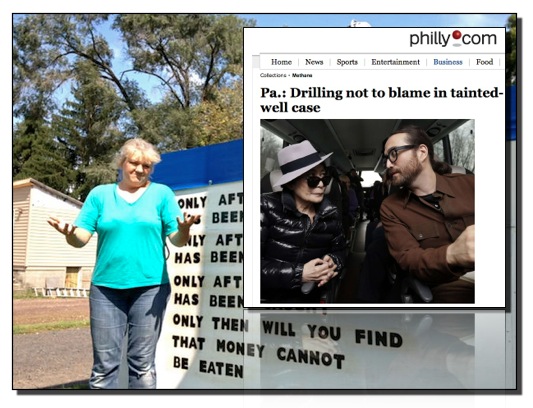 A few websites such as EID Marcellus.org explained the process of what happens when a natural gas operator is accused of possible damage to water wells. I also did research over the phone with the industry and the Pennsylvania Department of Environmental Protection.

Now for the facts: Pennsylvania is very different from New York insofar as standards for water well construction and oversight – there essentially is no regulation of private water wells in the Commonwealth of Pennsylvania. New York is the complete opposite, with regulation, licensing and oversight for any water well. The malicious behavior of those so greedy to bend our justice system toward their ideology resulted in a rush to opportunity, and formation of a mob determined to assert “guilty until proven innocent.”

Pennsylvania does, nevertheless, have something called Act 13 which automatically presumes the natural gas industry is responsible for any suspected water well damage within 2,500 feet of a natural gas well. There is a time period of 12 months after completion (also known as fracturing) where a claim must be made. If a claim is made the industry must supply potable water until the claim is researched and the problem determined.  You might say this the official version of “guilty until proven innocent.”

Some Northeastern Pennsylvania water, as any old-timer will tell you, isnt the greatest and very little baseline testing of water wells ever occurred until the natural gas industry came to the region. When accusations are made and the hysteria attached to the smell of money from frivolous lawsuits starts, it’s not unusual for water buffalos to break out like chicken pox across the landscape, before any research is completed or the facts are even known.  It’s all due to this thing called “presumed liability,” which is actually a protection for homeowners, but misused by some.

The vision of wealth without laboring for it can be intoxicating. A rule that was put in to help oversight and protect now gets abused. The time span for investigation becomes the warped opportunist playground funded by those who lose if America starts to become more energy independent. Guilty until proven innocent.

Now for the rest of the story…

Here are the key excerpts:

“Additionally, agency staff evaluated information from a nearby mobile home park public water supply file relating to the its abandonment of a water source in 1998 due to elevated levels of methane, chlorides and TDS. The mobile home park is located approximately 2.3 miles from Franklin Forks, and this water well exhibited similar water chemistry to that of the three residential water supplies being investigated.

“After a 16-month investigation, the Department of Environmental Protection has determined that high levels of methane found in three private water wells in Franklin Township, Susquehanna County, cannot be attributed to natural gas drilling activity in that geographical area. DEP’s extensive investigation started in December 2011 and included evaluation of the nearest natural gas wells, isotopic testing and analysis of historical water data to determine the origin of the methane.”

“The owners of the private water wells affected by this investigation have been notified of DEP’s determination.”

The news coverage on this was a total of one day. The exploiting misinformation that influenced local leadership had 16 months to drag through the streets and those groups and individuals (and some leaders of communities) who engaged in such tactics should not hold any positions where responsibility counts.

We are living in challenging times but, remember, this is still America where you are innocent until proven guilty.

5 thoughts on “Guilty Until Proven Innocent of Natural Gas Crimes”