The Green New Deal is a year old but the farting cows, grounding of all airplanes and rebuilding of every structure in America seems like a distant debacle.

It was an embarrassment–and, to my knowledge, the most ill-conceived energy proposal in the history of the United States by a wing of a major political party since the oil-industry nationalization proposals of the shortage 1970s (yes, Bernie was part of that).

The Green New Deal FAQ was published on the website of Alexandria Ocasio-Cortez (AOC) on February 5, 2019, only to be taken down after an outcry over its proposed elimination of air travel and cow flatulence.

But the public-relations disaster was a Godsend for the energy/climate realists. The futile climate crusade was exposed for its exaggerations and assault on peaceful, self-interested activity.

And the political bluff was called by a Senate vote, in which zero (0), votes were cast in favor. 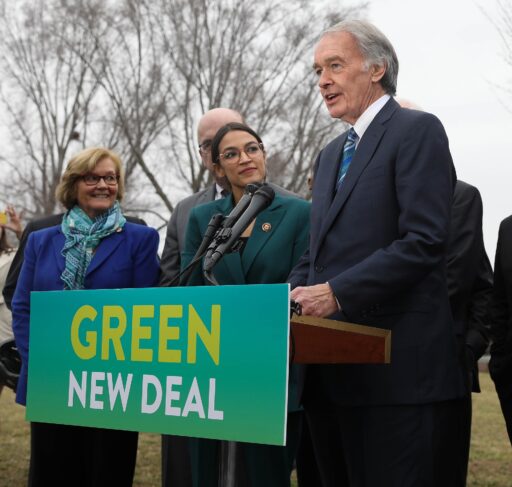 The best parts of the deleted 2,138-word FAQ follow:

What is the Green New Deal?

The Green New Deal is a 10-year plan to create a greenhouse gas neutral society that creates unprecedented levels of prosperity and wealth for all while ensuring economic and environmental justice and security.

The Green New Deal achieves this through a World War 2 scale mobilization that focuses the robust and creative economic engine of the United States on reversing climate change by fully rebuilding our crumbling infrastructure, restoring our natural ecosystems, dramatically expanding renewable power generation, overhauling our entire transportation system, upgrading all our buildings, jumpstarting US clean manufacturing, transforming US agriculture, and putting our nation’s people to work doing what they do best: making the impossible possible…

In short, the Green New Deal fully tackles the existential threat posed by climate change by presenting a comprehensive, 10-year plan that is as big as the problem it hopes to solve while creating a new era of shared prosperity…

Why is such a large-scale mobilization necessary right now?

A recent IPCC report declared that global temperatures must be kept below 1.5 degrees Celsius above preindustrial levels to avoid the most severe impacts of a changing climate. This calls for global reductions of greenhouse gas emissions of 40 to 60 percent by 2030. The U.S. contributes 20% of global emissions. To hit these global targets, the US must not only get to a greenhouse gas emissions neutral society by 2030, but it must also lead this change abroad to avert climate catastrophe…

Why do we need a sweeping Green New Deal investment program led by the government? Why can’t we just rely on regulations, taxes, and incentives such as a carbon tax or a ban on fossil fuels?

How will you pay for the Green New Deal?

The Green New Deal is a massive investment program, not an expenditure. The question isn’t how will we pay for it, but what is the cost of inaction, and what will we do with our new shared prosperity created by the investments in the Green New Deal…

The Green New Deal is a 10-year plan to jumpstart the complete transition of our society away from fossil fuels to renewable energy sources and to achieve zero greenhouse gas emissions and pollution. The resolution outlines the plan to virtually eliminate greenhouse gas emissions and pollution from every sector of the economy through a World War 2 scale mobilization of our society to create the renewable energy infrastructure and clean industries as fast as possible.

The Green New Deal sets a goal to get to net-zero, rather than zero emissions, at the end of this 10-year plan because we aren’t sure that we will be able to fully get rid of, for example, emissions from farting cows or air travel before then. However, we do believe we can ramp up renewable manufacturing and power production, retrofit every building in America, build the smart grid, overhaul transportation and agriculture, restore our ecosystem, and more to get to net-zero emissions.

The Green New Deal also calls for any infrastructure measures before Congress to address climate change and additionally calls for an end to the transfer of pollution overseas.  This provision goes farther than just calling for a ban on new fossil fuel infrastructure. Instead, it tackles all greenhouse gas emitting and pollution emitting sources in our economy and global trade. However, the more important driver to phasing out fossil fuel usage in the Green New Deal is the large-scale mobilization that will make new fossil fuel infrastructure or industries untenable.

The Green New Deal is a 10-year plan to reorient our entire economy to be pollution and greenhouse gas emissions free while ensuring every person in the U.S. benefits from this enormous transformation of our society.  This means creating a plan to develop the supply of clean energy, industries, infrastructure, transportation, and more for workers and frontline communities in conjunction with transitioning off fossil fuels. Only banning fossil fuels won’t build the new economy to replace it. The Green New Deal is a plan to build that new economy and spells out how to do it technically.

Representative Ocasio-Cortez is planning to immediately begin work on Green New Deal legislation to fully flesh out the projects involved in the Green New Deal. She also plans to work with members of Congress to incorporate existing legislation into the comprehensive plan for a Green New Deal.

Note the “farting” before “cows” above. That’s exactly the way it appeared in the initial posted draft of this FAQ.

Editor’s Note: The Green New Deal was a fairy tale. It was a phony plan for a phony cause that no one wanted but for the phonies who wanted to apply it to other people and not themselves. It was a childish attempt at surreptitiously advancing socialism; nothing more. Meanwhile, fracking continues to help reduce CO2 as AOC plots destruction from what, no doubt, is a gas-heated apartment in Washington. Reportedly, she lives in on of three luxury projects under the umbrella of “The Collective,” which, of course, explains the attraction for AOC. Who wouldn’t want to live in luxury, while promoting the Green New Deal and extolling the fact you live in a collective. The marketing genius of the developer is simply astounding, matched only by Patagonia.