What’s happening in Rhode Island should be a warning to all of New England; you are headed for an icy fall with respect the energy you need to keep warm.

Rhode Island is a state where the green goblins of political correctness hold full sway and determine policy. What they have wrought is something akin to the problem in California where decades of failure to maintain electricity infrastructure have led to inexcusable use of deliberate blackouts as a way to avoid catastrophe. New England is fraught with the same sorry mentality when it comes to natural gas infrastructure.

Steven C. Dodge, who works with the New England Petroleum Council, recently delivered this message with a compelling op-ed in the Providence Journal. Here’s what he had to say (emphasis added):

Rhode Island has just received a dire warning about the dangers of going backwards in upgrading natural gas infrastructure.

In its review of last January’s utility system failure during a brutal cold spell on Aquidneck Island that left more than 7,400 customers in Newport and Middletown without natural gas for heating, the Division of Public Utilities and Carriers identified mechanical and operational failures by National Grid. 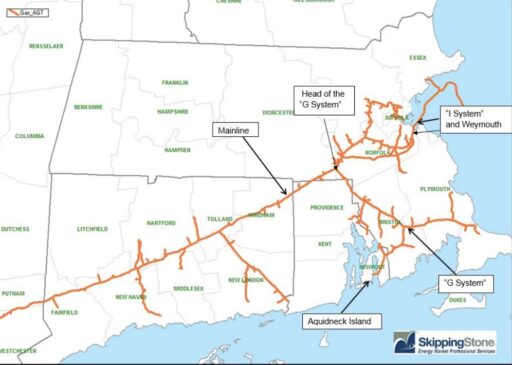 Most importantly, the division highlighted what turned that breakdown into a crisis: The fact that National Grid predecessor Narragansett Electric had shut down a Newport gas storage facility in 2010 and never replaced it.

The division affirmed that had there been a liquefied natural gas (LNG) facility in operation last Jan. 21 on Aquidneck Island, it would have easily made up for the natural gas supplies that shut down elsewhere in New England’s energy grid. And Rhode Islanders never would have faced the risk of freezing to death in unheated homes, middle-of-the-night evacuations to emergency shelters, and more than $25 million in costs related to the shutdown that ultimately will land on their monthly gas bills.

As the division wrote in its report, shutting down the Newport LNG facility “created preconditions that significantly contributed to the outage … As demand on the island grew year by year, the Company failed to forecast the need to redeploy LNG to address load growth.” It also noted that, “Had Narragansett Electric supplied backup LNG vaporization, the gas-distribution system could have survived the low-pressure condition without an outage.”

National Grid is now moving to bring LNG into Newport County this winter as a backup supply. In hindsight, allowing the Newport LNG plant to shut down in the first place looks like an extraordinarily risky gamble.

Newport is barely 320 miles east of the some of the world’s greatest reserves of natural gas, in Pennsylvania’s Marcellus Shale region. If we could get more interstate energy infrastructure built, Rhode Island could enjoy much lower natural gas bills. Unfortunately, today we pay 58 percent more for natural gas than Michigan and 85 percent more than New Jersey, according to the U.S. Energy Information Administration.

The reality is, upgrades to natural gas infrastructure in Rhode Island haven’t come close to keeping up with the demand for this affordable, abundant, domestically produced fuel resource. According to the Northeast Gas Association, since 1990, the percentage of Rhode Island homes heated by natural gas has soared from 40.7 percent to 53 percent as use of heating oil has dropped from 27.9 percent to 16 percent. In fact, 93 percent of Rhode Island’s power generation comes from natural gas in 2017 — a higher percentage than any other state…

What we learned the hard way last January is what happens when Rhode Island moves backwards with natural gas infrastructure. We got our middle-of-the-night wakeup call. Now we need to move ahead with the sensible, long-overdue energy infrastructure upgrades Rhode Island has been needing for years.

Well said, Steven! There is no excuse for what’s been happening in New England. State leaders have surrendered to the green goblins of political correctness rather than address real energy problems. They’ve aligned with those who would destroy New England to save it and recklessly abandoned responsibility to their citizenry.