Green energy quickly fades whenever the costs suddenly become readily apparent and no one wants to pay. China and Germany provide the latest evidence.

As the mush for brains and wolf-crying millennial Alexandria Ocasio-Cortez preaches the world is about to end in 12 years and the cost of green energy is, therefore, somehow irrelevant, two countries are saying otherwise. And, they’re not just any countries; they’re two of the nations cited by green energy advocates as world leaders we should all emulate with the greatest urgency. They are China and Germany. Both are stuck on coal as the U.S. has moved to cleaner gas that actually makes a difference. 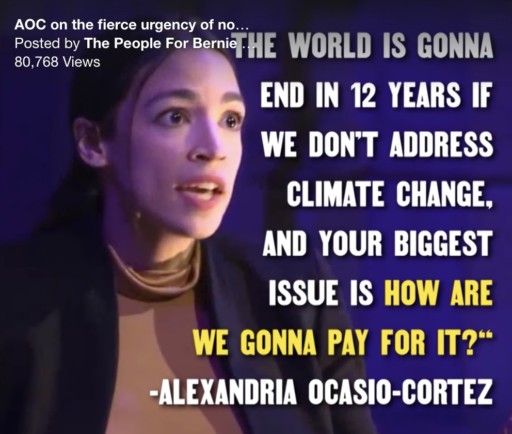 If you listen to AOC long enough, 30 seconds or so, you realize she really has it in for her homeland. She supposes the U.S. is the cause of a global warming crisis and must spend whatever it takes to pursue a green energy revolution; her green new deal.” That attitude ignores reality. It is the U.S. that has “bent the curve downward,” on emissions as AOC-like politicians are prone to say. We have shifted from coal to gas to do so. China and Germany are sticking with coal because green energy can’t compete with it as gas does (although China is now fracking, too).

Here’s the story from China via our friends at the Institute for Energy Research:

China recently put the brakes on solar and wind energy, indicating that it will no longer approve wind and solar power projects unless they can compete with coal power prices. In late May 2018, China issued “2018 Solar PV Power Generation Notice,” imposing caps on solar energy and reducing feed-in tariffs on those projects. More recently, China’s National Development and Reform Commission and the National Energy Administration provided a series of conditions under which new solar and wind projects would be approved through the end of 2020. Conditions include that the price must match or undercut the national coal benchmark and that the projects must show that the grid can handle their output. In 2017, 12 percent of wind generation and 6 percent of solar generation was curtailed due to lack of transmission capacity…

China is cutting back on solar and wind units due to their cost, the ballooning subsidies the state owes the solar and wind power builders, and the lack of grid-connected transmission capacity. It has now placed the financial responsibility for the units on the local governments and required any solar or wind power built to be cheaper than the benchmark coal price.

And, here’s the latest from Germany via Platts:

Germany needs to retain half of its coal-fired power generation capacity until 2030 to offset the closure of all its nuclear reactors by 2021/22, economy and energy minister Peter Altmaier said Tuesday…

Altmaier said half of Germany’s current hard-coal and lignite capacity of just over 40 GW would still be operational in 2030, with any agreed phase-out timetable needing a periodic review based on security of supply and affordability criteria.

German power prices could be 8%-13% higher between 2022 and 2030 under an accelerated coal phase-out compared with a base scenario, analysts at broker Bernstein said Tuesday…

The minister virtually excluded additional coal closures in 2021 and 2022 as over 4 GW/year of nuclear capacity are set to close.

Germany, of course, put all its eggs into its Energiewende, which has spectacularly failed to reduce emissions as intended, but has spectacularly increased electric prices. The inability to phase down the use of lignite or dirty brown coal is directly attributable to ideological decisions to get out of clean nuclear energy and to never touch clean natural gas development. Compare this idiocy to the U.S., where the shale revolution has simultaneously lowered emissions and energy costs. But, don’t expect the girl wonder from the Bronx to get any of this. That would demand the ability to think rather than preen.

5 thoughts on “Green Energy Being Abandoned As Economics Go Red”