Though repeatedly warned, Grant Township let itself be used by the radical CELDF as a tool to trigger a Marxist-type revolution, and is now going to pay.

Last month I wrote about how even the anti-gas Pennsylvania Attorney General’s office had identified just how dangerous the Community Environmental Legal Defense Fund (CELDF) is. The AG’s office illustrated by pointing out this infamous statement from Tom Linzey, the founder of this extremist outfit:

“And if a town goes bankrupt trying to defend one of our ordinances, well, perhaps that’s exactly what is needed to trigger a national movement.”

Now, Federal District Court Judge Susan Paradise Baxter (appointed by Barack Obama), who previously sanctioned CELDF attorneys in the Grant Township case, has ordered the Township itself to cough up $102,979.18 in attorney fees and costs for foolishly participating in the CELDF scheme.

It’s amazing how many people are fooled by the CELDF. Tom Linzey carefully masks the Marxist revolutionary purpose of his organization behind various causes. He convinces folks who believe they need a lawyer that their cause is his. Serial protesters, NIMBYs and other opponents of all sorts of projects imagine he’s there to help them fight bottled water, trains, fracking or some other cause.

Linzey’s only real cause, though, is himself and the revolution he supposes would give him the power he’s always secretly desired as the kid who didn’t quite fit in. He picks off communities as victims and, like a black spider, lures them into his web. Like all cultists, he uses them as torpedos against the system and convinces them dying in the effort will make them holy martyrs. That they die for him and not their own salvation is never quite disclosed.

Grant Township is such a community. It was warned, warned again and warned some more, but persisted in deceiving themselves. Township Supervisors wanted to believe LInzey was their holy warrior when he was really their tempter. They kept believing in him even after he and one of his staff attorneys were sanctioned by Judge Baxter (the real hero here). Unlike other communities who eventually saw the light, Grant Township stuck with Linzey even as the walls were tumbling in on them with a little help from Linzey himself who wanted them as his trophy victims with which to launch a revolution.

Now, Judge Baxter has administered the justice Linzey has always perversely desired for his clients: 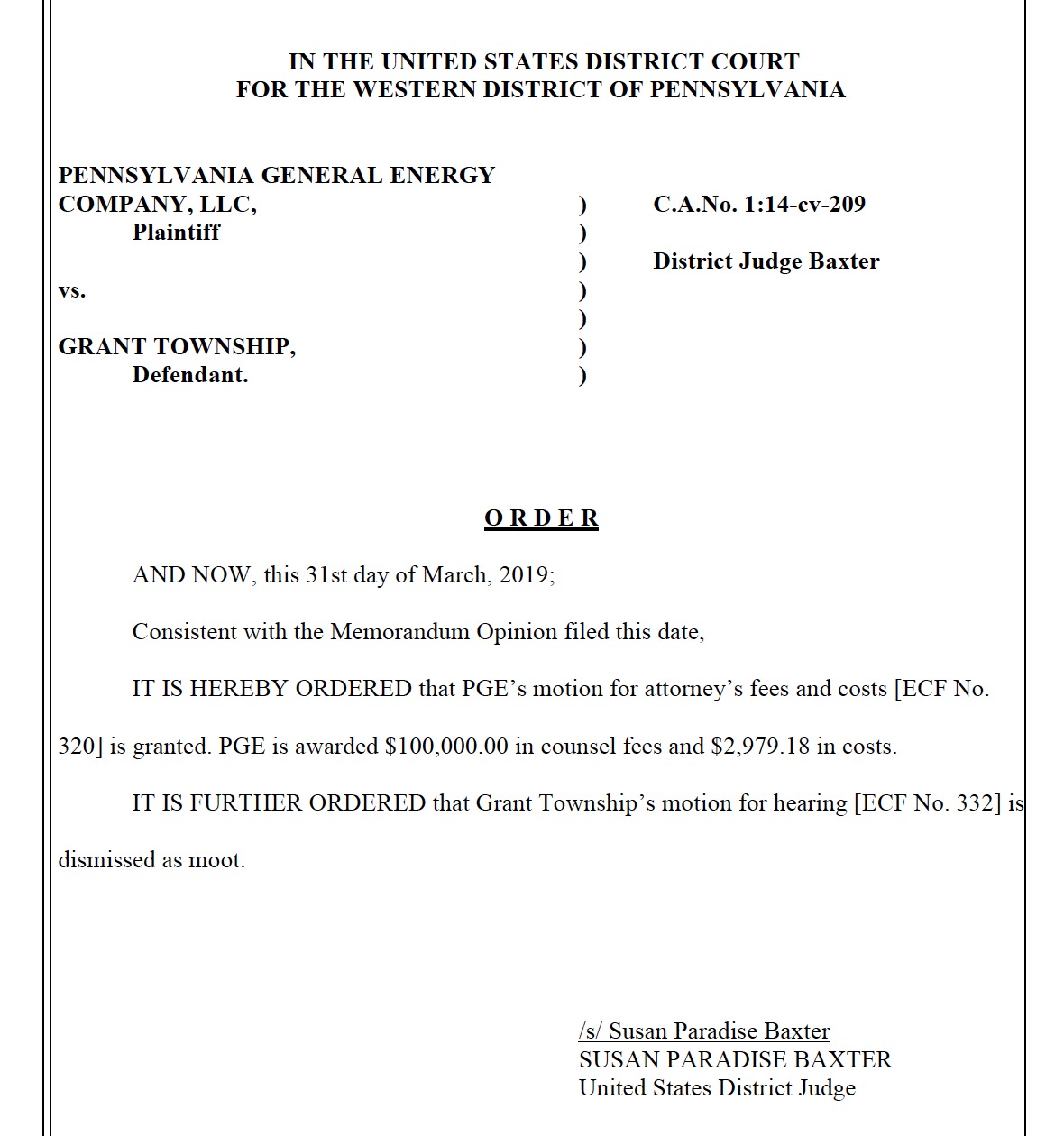 Grant Township claims that any award of fees would be unjust. The prevailing party should recover an attorney’s fee “unless special circumstances would render such an award unjust.”

Moreover, Grant Township should have to bear some of the responsibility here as it was on notice that the Ordinance was constitutionally suspect and likely preempted before it was passed. Even after the Ordinance was adjudged preempted by state law, Grant Township sought to make an end run around that judicial determination by amending its form of government and adopting the pre-empted and constitutionally deficient provisions in the form of a Home Rule Charter.

Grant Township also argues that PGE’s litigation strategy prolonged the proceedings. As this Court has already determined, complex and protracted litigation such as this “creates enormous expense to parties and taxes limited judicial resources.” That said, it is not PGE’s litigation strategy that has prolonged this case, but Grant Township’s. In awarding sanctions to PGE under 28 U.S.C. § 1927, this Court found “[t]he continued pursuit of frivolous claims and defenses, despite Linzeys’ first-hand knowledge of their insufficiency and the refusal to retract each upon reasonable requests, substantially and inappropriately prolonged this litigation, and required the Court and PGE to expend significant time and resources eliminating these baseless claims.”

Finally, Grant Township argues that the specific amount of $100,000.00 in attorney’s fees requested by PGE is unreasonable. PGE argues to the contrary. The party seeking fees bears the burden of proving “that its requested hourly rates and the hours it claims are reasonable.” To satisfy this burden, the party seeking fees is first required to submit evidence supporting the hours worked and the rates claimed. If it seeks to challenge the fees sought, “the opposing party must then object ‘with sufficient specificity’ to the request.”

…PGE has supplied information sufficient to recover all the fees billed for this litigation but only seeks a fraction of those fees in a good-faith effort to reduce the financial hardship on the Township. PGE has submitted Affidavits, detailed invoices, and summaries of each Babst Calland attorney’s work…

Grant Township requested a hearing on the motion for attorney’s fees, which will be denied as moot. This Court generally does not find oral argument useful in the resolution of motions where briefing has already occurred. In unusual situations where argument would be helpful to the Court’s resolution of complex matters, oral argument may be permitted. This Court believes that oral argument here would not significantly assist its understanding or resolution of PGE’s request for fees and costs. Nothing about the request presented issues of unusual complexity, and argument in this matter would have increased litigation costs without providing any appreciable assistance to the Court.

There you go. Nothing need be added. Grant Township loses, just as Tom Linzey intended. The CELDF moves on to deceive other communities in its quest for revolution.