Global warming theology is now consuming every bit of air in discussions of the matter of climate and politics leaving no place for real science or reason.

Discussions of global warming have lost all touch with science and reason. They have been replaced by global warming theology that only thinly masks political and financial agendas. When the silly “how dare you” challenge of a 16-year old manipulated to serve as a mascot becomes the fulcrum of the debate, we are far beyond anything remotely scientific in nature. Rather, we’re deep into self-deceit that no reasonable person can take seriously. Call me climate denier or whatever the heck else you want but I’m not going to play that game. Global warming theology, not global warming, is the threat.

Let me, before getting into why I say this, point out absolutely nothing I’m about to say detracts from the positive role natural gas plays in reducing emissions of all sorts. And, if you believe CO2, in particular, is a problem, you can’t ignore what natural gas is doing to reduce it. It’s the only meaningful contributor to reducing CO2 emissions. Here is a chart from the Energy Information Administration that tells that story: 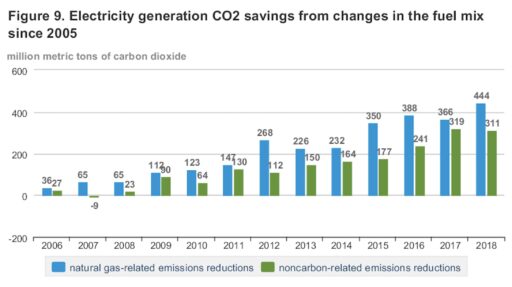 The shale revolution is what has dramatically reduced CO2 emissions along with a tremendous amount of other non-carbon emissions. It has done so by offering natural gas as a much cleaner fuel for purposes of electricity generation.

So, natural gas ought to be the one thing we can all agree upon. But, of course, almost no one talking about the supposed “climate crisis” will acknowledge this. Rather, the headlines from those pushing the crisis and from the sycophant press both assiduously ignore the fact, which is the tipoff we’re talking global warming theology, not climate science. The science is no longer relevant, in fact. Nor is reason. Both are losing out to the emotion, the fanaticism and the zealotry of a cause defined by faith in what can only be described as a secular religion. How else can you describe a movement that insists on calling its opponents “deniers”?

Well, call me a denier, too, if you wish. I’m not about to be intimidated into adopting a position simply because I’m told “everyone knows,” which is default position of nearly every climate crisis advocate very view of whom bother to offer facts other than their supposition all scientists agree. I prefer being known as a contrarian, curmudgeon or old grouch than one who cannot think or reason for himself. And, it’s painfully clear those who push global warming theology aren’t thinking for themselves so much as parroting political correctness. What we are witnessing is the disembowelment of science and reason for the crime of being open-minded.

The fear of science, not science, is what defines global warming theology. That’s why “denier” is the label of choice among the advocates for those of us who question the articles of faith held by these secular religionists. It’s also we why we were presented with a junk science study a few years ago about 97% of scientists being in agreement on global warming and its causes. Only a fool could believe 97% of any group share the same view based on nothing more than models, but it served its purpose of providing cover for media and political types (e.g., Chuck Todd) to dismiss any objections to the creed. Cross the line to ask a question and you’re now told “get outta here.”

These features of global warming theology are enough to convince most of us there’s something other than science or reason behind this “crisis.” This is why the general public consistently treats it as one of their very least concerns. That has only made the believers ever more determined to impose the faith, of course. One of our readers, a nice fellow from a regional university who happens to be in the climate crisis camp has, for example, offered the following revealing comments on some of our earlier articles, (emphasis added):

So let’s see. We can choose to allow ourselves to be informed on the climate-change issue by scientists who do their best to conduct solid, peer-reviewed research on climate issues. Or by a bunch of folks (like you, Tom) who are financially supported by the fossil fuel industry. Hmm, decisions, decisions…

No. I just listen to my colleagues in the scientific community. And read their papers. There’s a mountain of good science out there establishing that human-caused climate change is a real problem that needs to be solved. It’s accessible through Google Scholar in case you are willing to look. And because climate change is real, efforts to deny it away are ultimately fruitless. Until we drastically reduce our input of CO2 and methane derived from fossil fuels into our atmosphere, the concerns will persist…

So let’s see. To whom should we listen with respect to the impacts of burning fossil fuels on our climate? Scientists who publish in preeminent peer reviewed journals like Science and Nature? Or some guy who runs a pro fossil fuel blog? Decisions. Decisions.

Ok, got it. I’m just “a guy who runs a pro fossil fuel bog.” Well, if you say so, but I must point out all fossil fuels aren’t equal. I advocate for natural gas, not fossil fuels per se. In fact, I have often pointed out how New York City’s switch from heavy oil to natural gas has cleaned their air and saved hundreds of lives, not to mention information from the above chart. But, let’s not nitpick. Instead, let’s carefully analyze to see if we can help with those decisions about which our reader is obsessed. He’s so worried others might not choose carefully that he has mentioned decisions four times to date.

First, let’s understand something about peer review; too often, it’s about having a member of a group who thinks like you at the outset reading and opining on your version of an opinion you already share. Consider this late 2018 Nature paper, for example, bearing in mind our reader cited Nature as a reliable source of climate science. It got a lot of attention in places such as Washington Post, which slavishly reported “the findings mean the world might have less time to curb carbon emissions.” Climate scientist Judith Curry, though, saw through it immediately:

The findings of the Resplandy et al paper were peer reviewed and published in the world’s premier scientific journal and were given wide coverage in the English-speaking media. Despite this, a quick review of the first page of the paper was sufficient to raise doubts as to the accuracy of its results. Just a few hours of analysis and calculations, based only on published information, was  sufficient to uncover apparently serious (but surely inadvertent) errors in the underlying calculations.

The errors completely destroyed the paper’s conclusion that climate sensitivity to increased CO2 might be too low. It was retracted; after being peer reviewed.

And, then, there is Michael Mann, whose hockey stick graph was famous before it became infamous. Nature published that, too, and the IPCC picked it up as well, but it’s no longer in their reports because a couple of Canadian scientists demolished it. This wasn’t the last time this happened with Mann, either. A Nature‘s Scientific Reports peer-reviewed paper by him was apparently brimming with mistakes documented here. iThe critique notes “Mann’s errors [were] in no way unique or rare; indeed, they are banal and ubiquitous.”

That paper might have also mentioned ClimateGate and Mann’s work to “hide the decline.” It would have been professional discourteous, of course. But, most individuals with even a passing interest in global warming already know about the scandal. The high priests of global warming theology, though, tell us to pay no attention. That gets at the real issue here; experience in integrating information discerned from various observations in life is a far better measure of reality and the truth than experimental models. Truth, that is to say reality, is more than just counting, more than simply offering assertions based on a limited number of facts and far more than a mere idea or thesis.

A honest observer trying to decide something, for example, will consider the following:

Science is susceptible to the fatal conceit; that knowledge about one thing is knowledge about all things. But, universal knowledge is unachievable. We can only discern such knowledge as we will ever have from synthesis of science, experience and a whole lot of other things. The fatal flaw in global warming theology is that its adherents attempt to impose an ideology on all of us by calling it science. It’s not. Real science is what we need and it’s only just begun.

There, I’ve said it.