Williams fumbled the ball, the NRDC gang knifed the project and Cuomo strangled it with lawsuits, but heretical global warming theology enabled it all.

There’s a ton of blame to go around for the demise of the Constitution Pipeline. There’s no question Williams badly fumbled the ball while passing it back and forth with New York State’s DEC, not realizing the agency was completely under the thumb of the nation’s most blatantly political governor. Williams was used and abused over and over again by DEC, although it did a nice job legally once it finally got into Federal court where it should have been after one year. We can also rightly complain about Williams giving up after they had essentially won legally, thus throwing the industry as a whole, not to mention the Upstate supporters, to other wolves.

We can also fault DEC staff, Governor Corruptocrat and the NRDC gang, all of whom contributed to the demise of the Constitution Pipeline. But, what truly enabled this sellout of Upstate? Well, it was the cover provided by global warming theology, which appeals to urban New Yorkers and they are the huge majority. I’m not talking about climate change science because that works for us. We’ve done more to lower CO2 emissions and clean the air than anything else. How many times do have to prove it? No, global warming theology is the half-baked, throughly unscientific balderdash we saw touted in the New York Times late last year, where it served as an excuse to appease the special interests who killed the Constitution. 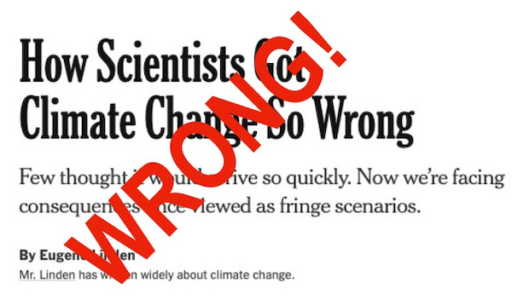 Natural gas happens to be a solution if you think CO2 is going to kill the planet. Nonetheless, those who despise natural gas pipelines and development for various reasons (e.g., making a wilderness of Upstate New York, promoting green eggs and scam investments, antipathy toward the bourgeoisie world of oil and gas) latch onto global warming as an excuse to damn it. This global warming theology is the basis of Andrew Cuomo’s opposition to the Constitution, other pipelines and fracking. He seeks to appease these folks, those who dwell high above the concrete and steel canyons of Manhattan and presume to be qualified to decide everything; how to farm, how to make energy and how to save the world with their superior intellects.

Eugene Linden’s “How Scientists Got Climate Change So Wrong’ So Wrong?” article in the New York Times (November 8, 2019) spoke to those same people and assured them and Cuomo they were are all absolutely correct to use global warming as a rationale for fighting off natural gas, pipelines and other gauche activities. It was a piece that served to rationalize anti-pipeline positions by painting a picture of impending doom having no basis in science beyond Linden’s pretension of grasping it. A few points will suffice to explain.

Let’s start with this claim:

In 1990, the Intergovernmental Panel on Climate Change, the United Nations group of thousands of scientists representing 195 countries, said in its first report that climate change would arrive at a stately pace, that the methane-laden Arctic permafrost was not in danger of thawing, and that the Antarctic ice sheets were stable.

The IPCC wasn’t worried? Since when has the IPCC done anything but worry, hyperventilate and project disaster? That’s the question any objective reader perusing the article for reasons other than confirming their ideology ought to be asking. As Robert Walker notes at Science 2.0, that’s not even close enough for government work. Read the IPCC words yourself”

2.2.1.6 Vulnerability of human settlement to rapid thawing of the permafrost

Climate models have generally projected that arctic and subarctic areas are likely to warm more rapidly than the average global temperature increase. Such a rapid warming could result in a significant thawing of the permafrost in the subarctic, producing major disruption to buildings, roads and bridges, adversely affecting the stability of some existing structures and forcing changes in construction practice (French, 1989).

So, we learn nothing has changed in terms of the IPCC then and the IPCC now; and that Linden is a profound exaggerator who twists things to serve the point he wishes to make at a given moment. He should running for office somewhere, not writing for the New York Times.

Linden also says “…a review of 40 years of satellite images suggested that the East Antarctic ice sheet, which was thought to be relatively stable, may also be shedding vast amounts of ice,” citing a source that relies upon a study saying this (emphasis added):

East Antarctica is still probably gaining ice in other words. And, that talk about the “methane-laden” Arctic permafrost? Well, Walker points our this:

The permafrost in the Arctic is NOT methane-laden. It’s got ancient organics from frozen vegetation and animal life. there are organics in the permafrost that can turn to methane or carbon dioxide or just soil organics as they warm up depending how they decompose and what depth in the soil, how damp or dry, what microbes colonize, the plants and peat, etc.

Whether it produces methane or carbon dioxide and whether the gases reach the surface depends on how it decomposes and at what depth. E.g. in damp anoxic conditions it produces methane but if there are overlying layers that are drier then the methane will be eaten by other microbes as it gets to the surface, if it is a dry area then the microbes produce carbon dioxide.

The whole Linden article is nothing but global warming theology gospel. It has no connection to to science or reality. It’s pure spin by a fellow who has B.A. from Yale in something he doesn’t tell us (if it’s Yale no telling is required, of course) and describes himself simply as a writer. That qualifies him as a sophisticate in the world of Times readers.

Linden is also “Chief Investment Strategist, Bennett Management (a family of investment funds specializing in distress and bankruptcies),” we’re told. Move over Mitt Romney and Bain Capital; there’s new sheriff in town and he’s a prophet of global warming theology on the side! Bennet Management, in fact, is part of a hedge fund group known as Restructuring Capital Associates, about which the current information is very sketchy (no website, no recent news releases, no SEC filings since last June). We know the firm had been invested in coal and then put money into California Resources Corp. and Vistra Energy in 2017. The former is big in oil and gas but has realized the big money today is in seeking government rent for green eggs and scam stuff, although they do make a compelling case renewables need gas. Vistra Energy is more of the same.

What this all tells us is that Eugene Linden speak with forked tongue. He preaches global warming theology while serving as the Chief Investment Strategist for a hedge fund group hoping to make a killing in green energy rent-seeking scams. It’s all phony; the twisting of facts, the hysteria, the scare-mongering, every bit of it. It’s also the special interest that Governor Cuomo has served in banning fracking, fighting pipelines and forcing green giant renewables projects onto Upstate while emptying it out for the enjoyment of the NRDC gang and their ilk, which includes Eugene Linden. The idea is to hamstring oil and gas to make a place for ratepayer/taxpayer ripoffs in the name of fighting global warming. Real science? Forget about it.