[Editor’s Note: A global warming poll from organizations with “Climate Change Communication” can hardly be expected to be unbiased and it isn’t.]

A recent survey claims that there is wide support for policies to combat climate change by developing “clean” energy.  I am very cynical about polls in general and climate polls in particular.  This post poses some questions about the survey results. 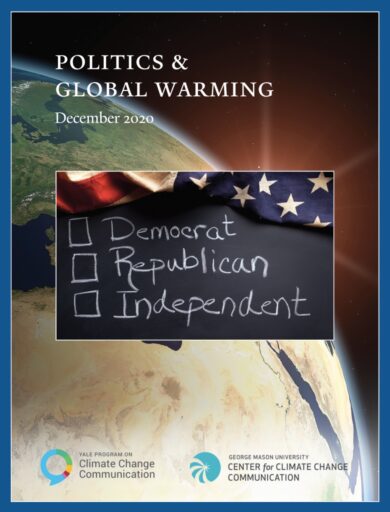 “Drawing on a nationally representative survey (N = 1,036; including 949 registered voters), this report describes how registered voters view a variety of climate and energy policies. This survey was fielded from December 3 – 16, 2020 – after the results of the 2020 U.S. presidential election were known, but before control of the U.S. Senate was determined. This executive summary reports the results from all registered voters, while the report breaks the results down by political party and ideology.

In the Executive Summary I count percentage results for 62 questions.  The report breaks down the results from questions in more detail, but the complete survey text is not included as far as I can tell. There are questions included in graphical results but I believe that there had to be some explanatory text too.  Given the volume of material included in this survey I believe it is expecting a lot to expect respondents to have enough knowledge of the topics to give educated responses.  If the survey does provide background information, that is where the biases of the survey developers could easily affect the results.  If not, then respondents have to depend on sound-bite news stories.  There is nothing in this poll that reduces my cynicism of climate polls.

Premise of the Survey

Section 2, Support for Policies to Reduce the Pollution that Causes Global Warming, describes questions related to strategies to address climate change.  There is an implicit presumption that we understand the reasons for climate change well enough to be able to say climate mitigation policies could actually affect global warming.  If there was any expository text introducing these questions, I am sure that it followed the politically correct meme that there is a climate crisis and we have to act now to save the earth from thermal Armageddon.

What if the respondents were to hear the other side of the story?  In a recent interview Judith Curry described the climate models used to generate the scary stories used to justify the policies:

“However, the most consequential applications of climate models are to tell us what caused the 20th century climate change, how much the climate change is going to change in the 21st century and what’s causing extreme weather events. I mean, those are the more consequential applications and climate models aren’t fit for any of those purposes. And that’s pretty much acknowledged even in the IPCC report. Well, they, they do claim that they can attribute the global warming, but this can’t be easily separated from the natural variability associated with large-scale ocean circulations. And the way they’ve used climate models to do that involves circular reasoning, where they throw out climate simulations that really don’t match what was observed. So, you, you end up, even if you’re not explicitly tuning to the climate record, you’re implicitly tuning. And then the thing with extreme events, weather events is beyond silly because these climate models can’t resolve the extreme events and they can’t simulate the ocean circulation patterns that really determine the locations of these extreme events. And then when you start talking about 21st century, the only thing they’re looking at is the manmade human emissions forcing, they’re not predicting solar variability.”

The first subsection stated that “There is bipartisan support for U.S. participation in the Paris Climate Agreement”.  The text states:

“In December, 2015, officials from 197 countries (nearly every country in the world) met in Paris at the United Nations Climate Change Conference and negotiated a global agreement to limit global warming.  On Earth Day, April 2016, the United States and 174 other countries signed the agreement, with all of the other countries following suit. On June 1, 2017, President Trump announced that the United States would withdraw from the agreement, and on November 4, 2020, the day after the U.S. presidential election, the U.S. formally withdrew. President-elect Biden has announced that the U.S. will re-join the agreement soon after Biden’s inauguration on January 20, 2021.”

I have to assume that this text was used in the survey.  There is nothing factually incorrect in this explanation but for a public that has no clue it also does not provide the full story.  Bjorn Lomborg recently pointed out that “Climate change, according to Biden, is “an existential threat” to the nation, and to combat it, he proposes to spend $500 billion each year on climate policies — the equivalent of $1,500 per person”.  He goes on to explain that the agreement will not materially affect global warming itself and that increases in emissions in countries without Paris Agreement commitments will quickly overwhelm any reductions made in the United States.

In Appendix I: Data Tables, the specific question was quoted:

“In 2015, the United States signed an international agreement in Paris with 196 other countries to limit the pollution that causes global warming.  Do you strongly support, somewhat support, somewhat oppose, or strongly oppose the U.S.’s participation in the Paris Agreement?”

The report claims that:

If the Lomborg’s background information were provided then I do not believe there would be as much support for the Agreement.

The report states “A majority of registered voters support a ‘Green New Deal’”, but does admit that “only 18% say they have heard ‘a lot’ about it.”  The Section 2 documentation notes:

“As we reported in 2019, a majority of registered voters support the policy aspirations included in the Green New Deal, although support decreased during the time period between December 2018 and April 2019, particularly among conservative Republicans and regular viewers of the Fox News Channel.  The description of the policy was summarized based on a 2018 policy report: “the Green New Deal will produce jobs and strengthen America’s economy by accelerating the transition from fossil fuels to clean, renewable energy. The Deal would generate 100% of the nation’s electricity from clean, renewable sources within the next 10 years; upgrade the nation’s energy grid, buildings, and transportation infrastructure; increase energy efficiency; invest in green technology research and development; and provide training for jobs in the new green economy.”

Again, I have to assume that this text was used in the survey.  For anyone who has not heard a lot about the Green New Deal summarizing it based on a report from Data for Progress, “a multidisciplinary group of experts using state-of-the-art techniques in data science to support progressive activists and causes” clearly is going to hear only one side of the story.  A complete description would explain the following.  The conversion from fossil fuels to “clean” energy has negative consequences that are overlooked in the simple “clean” description.  It is impossible to convert 100% of the nation’s electricity to clean, renewable energy in ten years by any rational evaluation.  In addition to the technical considerations, costs will be enormous.

In that light of the biased information provided the survey’s findings are not surprising:

“About one in five registered voters (18%) have heard “a lot” about the policy proposal called the “Green New Deal” (see section 2.12 for a description of the policy). This represents an increase of 15 percentage points since this question was first asked in December 2018. Conservative Republicans were most likely to have heard “a lot” about the Green New Deal (27%), followed by liberal Democrats (23%).”

“Overall, relatively few registered voters have heard a lot about the Green New Deal, which suggests that opinions about the proposal may continue to change over time.”

I agree with the authors of this survey that opinions about the Green New Deal may continue to change over time but I suspect that if the short-comings of the policy and costs become known that the support for it will plummet.

Organizations with the name “Climate Change Communication” in their names are necessarily dependent upon climate change being a problem.  So, it is not surprising that the survey was constructed to get answers supporting their pre-conceived outcome that there is wide support for policies to combat climate change by developing “clean” energy.  However, if respondents who admit to having little knowledge about the topics in the poll are given both sides of the story, I believe the results would be much different.  Nonetheless expect advocates to use this poll to justify action.