Those who worry about global warming and the contributions of methane emissions to it ought to turn their attention to hydroelectric power.

Fractivists who lie awake at night worrying about global warming (I’m not one of them) obsess on the idea methane is a much more powerful greenhouse gas than carbon dioxide and like to think methane leaks from natural gas production must, therefore, outweigh the benefits of CO2 reduction from switching to natural gas. This is the fundamental theme of Bob Howarth’s and Tony Ingraffea’s junk science, after all, research that has been panned by almost every responsible scientist of any credibility on the issue. 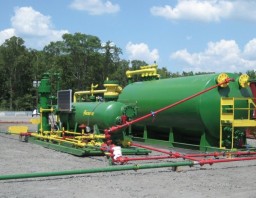 The industry’s response has been to point to the criticisms of other academics and to note it has, with green completions (see Fracmaster Green Completions equipment depicted to right) and the like, been steadily lowering methane emissions. That’s all true, but there’s another major point to be made and it is this; hydroelectric power, the largest source of renewable energy, the alternative fractivists would have us believe solves all problems, produces methane in huge quantities.

Methane emissions associated with natural gas development and use, contrary to the fractivist hype, have been plunging since 2008 when Marcellus Shale development started in earnest. According to the EPA they’ve dropped by 21.7 million metric tons of CO2 equivalent or 14.3%, despite huge increases in shale gas production. The reason; ever improved technology and green completions.  This accounted for 31.8% of the total reduction in methane emissions in the US. Yes, they have been reduced, although you would never know it from the fractivist hysteria. See Energy In Depth generated chart (from our Fact Sheets collection) below: 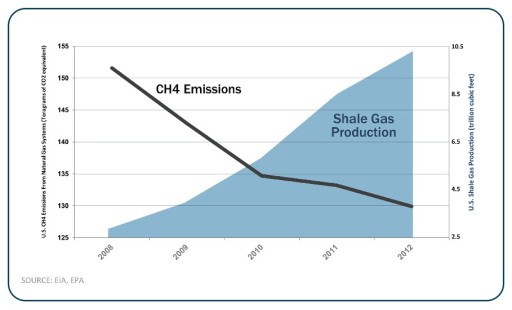 There are three other things you will never hear from fractivists worried about methane either. One is that natural sources of methane dwarf the contributions of natural gas development and use. Another EPA study conducted in 2010 indicates natural sources of methane total 208 million metric tons, of which 170 are associated with wetlands, but this is without converting to the CO2 equivalent, which means the number is far higher in terms of greenhouse gas effects.

How much higher is anyone’s guess, which is the second point readers should note because the calculations of relative contributions of methane are wildly different, depending on the source. The EPA, in 2010, for example didn’t provide a number but suggested natural sources were 37% of total methane emissions (567 million tons altogether) which indicates there’s something wrong with its numbers because a couple of years later it claimed man-made sources accounted for just slightly more than that and this was after adjusting to a CO2 equivalent basis. EPA made that adjustment using a multiple of 21.

Likewise, two different Scientific American articles, one in January of this year and the other a few days ago, came up with much different multiples of 30 and 84, respectively, apparently depending on the number of years examined. The science is a muddle, in other words, and the real impact of methane emissions related to natural gas development and use is far from clear. We do know that impact is shrinking, however, even as we produce and use more of it from shale formations.

Scientific American magazine, which has taken a very politically correct tact in recent years, not to mention putting out all sorts of different numbers to make its cases, has, nonetheless, provided some interesting new information. That most recent article to which we referred above offers the third thing most readers may not realize about methane emissions. It is that hydroelectric power, which represented 51% of all renewable power generation in the US in 2013, accounts for major methane emissions. 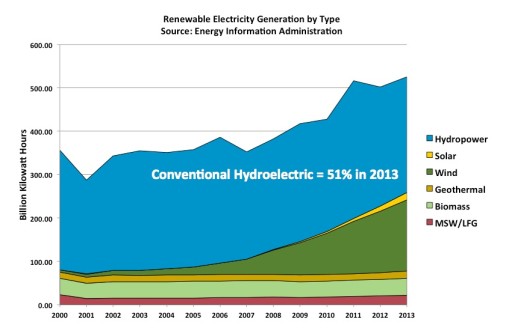 Here are some of the tidbits from the piece (emphasis added):

Big dams built in the tropics to produce hydroelectricity have long been highly controversial − and data gathered in Laos by a French team studying methane emissions confirms that dams can add to global warming, not reduce it…

As long ago as 2007, researchers at Brazil’s National Institute for Space Research calculated that the world’s largest dams emitted 104 million tons of methane annually and were responsible for 4 percent of the human contribution to climate change.

Since methane has an impact 84 times higher over 20 years than the same quantity of carbon dioxide, this is a serious short-term threat to pushing the planet towards the danger threshold of increasing temperatures by 2˚C .

Despite the warnings that big dams in the tropics might be adding to climate change, governments go on building them − while often claiming that large dams equal clean energy.

The new research shows that the methane discharges are probably even worse than current estimates.

In an attempt to find out exactly what the perils and benefits of big dams in the tropics can be, a French team from the National Center for Scientific Research has been studying the Nam Theun 2 reservoir in Laos − the largest in Southeast Asia − prior to its filling, in May 2008, right up to the present to calculate the total methane emissions…

With the help of a statistical model, day-to-day data related to atmospheric pressure and water level was used by the researchers to reconstruct emissions by ebullition over a continuous four-year period, from 2009 to 2013.

The results obtained highlight the importance of very frequent measurements of methane fluxes. They also show that the ebullition process − and therefore the amount of methane emitted from tropical reservoirs during their first years of operation − has most certainly been underestimated until now.

Just for the record, I’m not terribly worried about a 2˚ C increase in temperature given we’ve had no recent increases, it’s been much warmer before and the science is far from settled, but many of our readers and many natural gas supporters are, and I respect them.

If they’re correct and I’m wrong, that’s all the more reason to get things right with the data. Let the hyperventilating of fractivists come to end. Let’s recognize what’s being said in this piece about what constitutes more than half of all renewable electricity generation – hydroelectric power. It sounds remarkably similar to fractivist complaints made against natural gas except that the natural gas record is clearly improving year by year. Those who are serious about global warming as a threat need to think long and hard about that. There is no energy source that is free of impacts and risks – absolutely none. Some are better than others, to be sure, but natural gas is part of the solution, just like renewables.

5 thoughts on “Global Warming Brought on by Hydroelectric Power?”