Legislators from Boulder who couldn’t care less about the rest of the state are on the attack against the job-creating Colorado oil and gas industry.

Both the substance and the handling of a new Colorado bill to overhaul oil and natural gas regulation is raising concerns amongst Colorado voters. 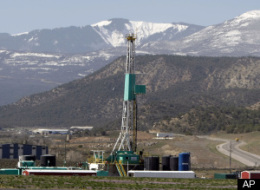 Amongst many other provisions, the omnibus bill:

Beyond the consistent anti-oil and gas stance of the bill—which has led both the Sierra Club and 350.org to enthusiastically endorse it—the lightning-fast transit from introduction on Friday to a hearing on Tuesday and the lack of consultation with oil and gas stakeholders has created the appearance of wealthy urban Democrats overruling the rural Coloradans whose livelihoods literally depend upon the oil and gas industries in that state.

Boulder legislators’ message to this guy: “Sorry, you’re dead to us now. We have the Sierra Club and 350.org to please”

As the Colorado Springs Gazette editorialized:

Boulder politicians do not represent hard-hat workers thankful for fracking jobs, people who work at the Suncor Energy refinery, or the men and women who transport oil and gas or work in other positions that support the industry. … Without a flourishing energy economy, underfunded schools will receive less money. Underpaid teachers will get even less. Hundreds of thousands of jobs, directly and indirectly tied to oil and gas, might be lost along with tax revenues they generate. Housing markets will suffer, and the state could go into a sustained recession. Those lowest on the economic ladder will suffer most.

Given the potentially huge impacts of this bill, the speed with which it’s being shoved through the Senate—it passed early Wednesday morning along party lines and is expected to be heard in the Senate Finance Committee as soon as tomorrow—is at best unseemly.

At worst, it’s a rebuttal of the voters’ will as Democratic legislative and executive leadership put their agenda above the needs of hundreds of thousands of Coloradans who depend upon a flourishing energy economy.

Speaking to oil and gas workers who rallied on Tuesday night against the bill, State Sen. John Cooke called the legislation “a sham …This was introduced Friday and we’re hearing it today, trying to stifle your voice and ramrod this through the Senate.”

Dan Haley, the president and CEO of the Colorado Oil and Gas Association, pointed out at the rally that more than $600 million in oil and gas revenues go to the state’s education system every year. The regulatory burdens enacted by this bill could well take a significant chunk out of that sum.

As the Colorado Springs Gazette editorialized, if enacted, this legislation “would devastate a disproportionate number of minority and low-income households, countering multiple decisions made by majority will in elections.”

Editor’s Note: As this article notes, it is the useful idiot demagogic city legislators out of Boulder who are behind this atrocious legislation going against the recently very expressed will of the voters. They are supported, of course, by 350.org, which is part of the eastern establishment and gentry class NRDC gang; funded and controlled by the Rockefellers with the direction Fractivist Rasputin Jay Hafon.

This is the real constituency of the folks from Boulder, once again demonstrating the utter contempt they all have for the needs of others. They couldn’t care less about jobs, energy security, clean air or any of things natural gas has delivered to ordinary Americans. It’s all about wilderness playgrounds, investments in crony capitalist renewables scams, virtue signaling and political correctness for them. Everyone else can eat cake.

The way to fight this, should it pass, is in Federal court on the basis of due process, which, of course, is also being ignored in the rush to ram this legislation down the throats of Coloradans before they have a chance to even know what’s going on. It’s also clearly a taking, with arbitrary standards having zero connection to science being employed to steal property rights. This is hardball and the industry better unite with landowners, unions, business and ordinary Coloradans to crush this gentry class attack.