David Crea
Process, Energy & Reliability Engineer, Watkins Glen, NY
(David Crea is employed by US Salt but speaks here for himself only)

LPG  and natural gas storage is hardly new to New York State – it already has 29 such facilities and no one even notices them, despite fractivist hysteria.

From all the Park-Foundation-generated hullabaloo about the Crestwood projects, you’d think this was the first time ever that gas or liquified petroleum gas (LPG) had been stored in the ground, one way or another. Not so, as there are over two dozen such facilities already operating throughout New York State, although you wouldn’t know it from the hysteria generated by the Gas Free Seneca and We Are Seneca Lake gangs.

What probably only a relatively-few people know is that there are 29, yes 29, already operating LPG and gas storage facilities in upstate New York, including 26 natural gas storage, and three LPG storage operations.

This nicely-done map from NYS DEC shows where they are located: 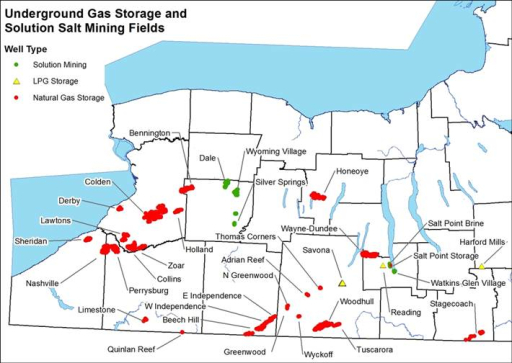 This, and other descriptive, factual overview facts on this industry, can be found on the New York State Department of Conservation website in plain view but where none of the Crestwood opponents want to go, lest they learn something countering their hysterical (and nonsensical) protest pitches.

What, you say you had no idea there were 29?  Where is all the news about fires, explosions, leaks  and injuries that are reputedly connected with these places?

Well, it is not surprising that people don’t know there are 29 energy-storage facilities because…..you just don’t hear anything at all about them in the news, unless they have perhaps donated to some local scout group or the like!  Yes, these facilities sit there, unobtrusive and un-noticed, and just do the job that society has the need for, while employing people, paying the taxes and bills, and distributing what is left to shareholders/owners.

Their employees are well-trained, just as you’d expect an intelligent facility operator to be for a high-tech, high-value plant, handling high-value flammable materials.

And, those same people, if need be, can be trained emergency-responders as well, and naturally fit-in to buttress the local volunteer fire departments.  But mostly, they just live, perform their jobs, hunt and fish, raise families, pay the mortgage and tax bills, and get up and do it again the next day.  Just like responsible citizens are expected to.

So the next time an anti-carbon-energy sympathizer tries to make you think the Crestwood facility is a terrible idea, unsafe, un-needed, a blight on the land, will scare away the tourists, and will blow the village away, etc., just ask them:  “Why then, have these 29 facilities not done that already, if they are so terrible?  Are you stretching the truth into a lie……to delude me?  Shame on you!  And by-the-way, you did drive here and use gasoline, didn’t you?  And by-the-way, just how do you stay warm in the winter, and obtain your food, supplies and mail?  Where is your horse?”

Hypocrisy, when exposed to reality, can melt like the Wizard of Oz’s Wicked Witch of the West.

Mr. Crea is a US Salt technical professional employee who is involved with their brinefield and wells management, but writes this as an interested citizen-observer, not as a spokesman for Crestwood or US Salt.

11 thoughts on “Gas Storage Far from New in New York, But No One Notices”