The events of this weekend represent a frightening attack on free speech by a Big Tech oligarchy that is increasingly fascist in character.

Some of you like President Trump. Some of you don’t. As for me, I believe he has been an outstanding President and has been cheated out of re-election. I also believe he has had a solemn duty to challenge what happened. And, as much as I abhor what happened Wednesday in the very halls of Congress, I blame neither him nor the vast numbers of protesters who did not participate in the atrocious activity of a few. Indeed, I, too, protested a few weeks earlier. Time will tell who exactly caused what and the guilty, whoever they may be, should be punished to the full extent of the law. But, this incident pales along side the violence that happened across the nation throughout this year.

Yet, none of the above rises to the importance of the attack on free speech made in response by Big Tech this weekend; an attack that will inevitably also threaten the ability of this blog, its sources, its friends and its enemies to converse. We are seeing what is nothing less than fascism on the part of the American oligarchy that is Big Tech. Apple, Google, Facebook, Twitter and Amazon have declared themselves corporate masters of the universe who will decide what is correct and what is not, make the latter a crime and then deliver the consequences. 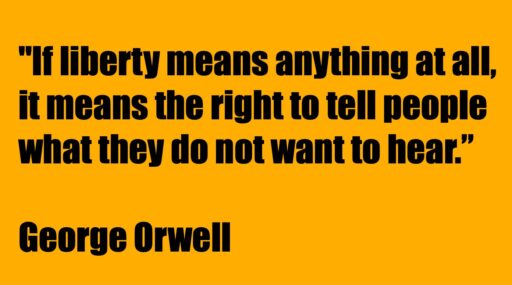 What happened, of course, is that Facebook and Twitter (among others) apparently colluded to simultaneously remove President Trump’s access to their platforms and also purge vast numbers of users who supported the President or dared to suggest there was election fraud. Then, when the President and friends moved to Parler as an alternative, Apple, Amazon and Google put the squeeze on that platform; refusing Parler the ability to sell apps or even access their server. Five of the six oligarchs of Big Tech, in other words apparently coordinated an effort to silence a President and 75 million people who voted for him. The fact this was done by private companies is irrelevant given the oligopoly power BIg Tech enjoys and its special protections under law. Anti-trust violation, anyone?

The significance of what happened cannot be overstated. What we saw was a handful of elites deciding what the rest of us are entitled to see. And, what were the standards for those decisions? Their opinions and perspectives, of course, which are decidedly different than ours. That wouldn’t be a problem if Facebook and Twitter had major competition but they don’t, not yet anyway. A handful of companies control the market and have the power to determine who gets heard and who doesn’t. Google has 87.6% share of the search engine business and the bulk of the video market, Apple has almost half the smartphone market in this country. Amazon has almost half of the e-commerce market in this country and its owner also owns the Washington Post. Some 68% of Americans use Facebook.

That’s an extremely dangerous situation for liberty and freedom of speech. It’s really no different from China where the government does the dirty work, except that here in America government protected oligarchs control the speech, which is even more outrageous in many respects. It’s the very definition of fascism as practiced by Mussolini, for example; a corrupt deal between government and favored corporations.

What this behavior does, in reality, is force citizens to lie to be heard. One must practice political correctness, have the correct views, only recognize certain facts and avoid questioning the company line. You can call for genocide if you are the Iranian leader but you must not question COVID-19 policy or mail-in voting here. This brings to mind some wise words from Aleksandr Solzhenitsyn in his famous “Live Not By Lies” essay regarding speech in the USSR:

We have been indoctrinated in political courses, and in just the same way was fostered the idea to live comfortably, and all will be well for the rest of our lives:  You can’t escape your environment and social conditions.  Everyday life defines consciousness.  What does it have to do with us?  We can’t do anything about it.

But we can—everything.  But we lie to ourselves for assurance.  And it is not they who are to blame for everything—we ourselves, only we. One can object:  But actually you can think anything you like.  Gags have been stuffed into our mouths.  Nobody wants to listen to us, and nobody asks us.  How can we force them to listen?  It is impossible to change their minds.

This is the box into which Big Tech is trying to force anyone who does share its corporate vision for the world, one which just happens to lead to ever increasing profits for it, as it promotes e-commerce and government rent scams such as “green energy.” We are now on the cusp of a world where criticizing such scams will be enough to shut us down as supposed “disinformation” despite the fact the parties determining the truth stand to benefit enormously from those determinations. One only need remember Ivanpah, which ripped off taxpayers for billions to subsidize a bird-torching Google solar project, to understand.

Yes, free speech is evaporating faster than your hand sanitizer. What can we do about it? Well, let’s return to Solzhenitsyn:

The circle—is it closed?  And is there really no way out?  And is there only one thing left for us to do, to wait without taking action?  Maybe something will happen by itself?  It will never happen as long as we daily acknowledge, extol, and strengthen—and do not sever ourselves from—the most perceptible of (the encirclement’s) aspects:  Lies…

This opens a breach in the imaginary encirclement caused by our inaction.  It is the easiest thing to do for us, but the most devastating for the lies.  Because when people renounce lies it simply cuts short their existence.  Like an infection, they can exist only in a living organism…

Our path is not to give conscious support to lies about anything whatsoever!

…For young people who want to live with truth, this will, in the beginning, complicate their young lives very much, because the required recitations are stuffed with lies, and it is necessary to make a choice.

How very true. It’s extraordinarily difficult to go against political correctness and live not by lies but we have been challenged this weekend to do so. Big Tech believes there is no longer anything between it and its march toward complete domination of our lives. But I will resist and I hope you do as well. We cannot lose free speech. I have deleted four Twitter accounts I used and got completely off it. Goodbye to thousands of followers. I intend to delete my NaturalGasNOW Facebook page, which is followed by roughly 35,000 folks. I’m also going to leave Reddit, no longer use Amazon or Google and explore other options for communicating with all of you. I urge you, also, to resist. This weekend, rhetorically speaking, was a call to arms in defense of free speech.