We are seeing fractivists’ tactics reaching desperate lows. Ranging from comparing police to Nazis in a new video to blowing up well workers.

One of the most recognizable faces from history is that of the murderous dictator, Adolf Hitler. We all have been taught or lived through the tragic times of his reign. The atrocities of those under his command will forever be remembered as pure evil. Today, we see people being compared to him all the time. I can’t count the number of times I saw people calling Trump Hitler or any other person that crowd tends to dislike. Recently, those Nazi comparisons took a darker turn and it has caught the attention of the police as they are investigating it as a possible hate crime.

Note:  Above video is offensive.

Last month, environmental activists created a very disturbing video that compares police officers that are protecting a U.K. gas site to Nazi SS guards. From the surface, I thought this was just another ignorant comparison, but in fact, the contents of the since-removed video are disturbing.

The U.K. is one of the few countries in Europe to allow fracking to take place. Local governments repeatedly refused to issue permits for years; however, permits finally were issued after the central government approved the process. In 2016, the Little Plumpton site was approved and local protestors have been there since. Just as we have seen in other places in the U.S., the police force was brought in to help protect the site – costing £450,000 a month.

The U.K. shale resources are estimated at 26 Tcf of shale gas and 0.7 billion barrels of shale oil. Retrieving these resources will create 74,000 new jobs and have the potential to generate anywhere from $10 to $74 billion for the British economy and $26 billion in new tax revenue. I’d say that is enough to warrant protection; which brings me circling back to the fractivists and their Nazi claims.

Their experiment intertwines environmentalists’ own footage from the fracking site at Fylde with scenes from Schindler’s List. They were not even original on the name: Tina’s List. There is no doubt that they are referring to Tina Louise Rothery, a fractivist and member of a group the Nanas. She is being hailed as a hero by the Don’t Frack [insert anywhere] groups after her group staged a three-week occupation of a field being considered for gas exploration. 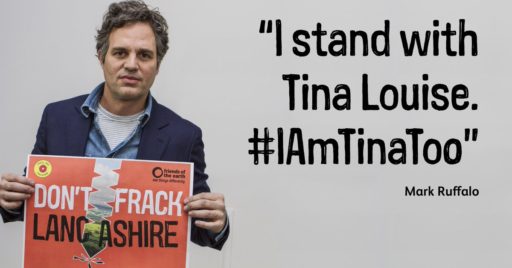 The worst part of the video is the clip of a young Jewish woman is shot in the head by an SS guard and the woman’s last words are that of Tina Rothery’s: “I am acting in the self-defence of my community.”  Rothery, a Green Party candidate, says she knew nothing about this video, but I am skeptical.

Marie van der Zyl, Vice President of the Board of Deputies of British Jews, said:

“This video beggars belief. The comparisons made to Nazis and the concentration camps belittle the memory of those who were murdered in the Holocaust. No matter the campaign, no matter the issue, the use of Nazi imagery is utterly unacceptable.”

I am sure the video came as a response to the lawsuit that environmentalists lost month as the judge tossed the case stating it is “not made out in substance.” However, this type of radicalism is becoming more and more trendy. Just as recently, The Boulder Daily Camera posted a letter to the editor that said people have a moral obligation to destroy infrastructure to keep fracking wells out. The author, Andrew O’Connor, stated:

“If the oil and gas industry puts fracking wells in our neighborhoods, threatening our lives and our children’s lives, then don’t we have a moral responsibility to blow up wells and eliminate fracking and workers?”

The letter was edited the next day to read:

“… don’t we have a moral responsibility to take action to dissuade frackers from operating here?”

The appalling nature of what we are seeing with this fractivist implosion is, perversely, good news in at least one tiny sense. It reveals what we knew all along about fractivism as a cause — it’s profoundly radical — and seeing this public meltdown shows they are getting desperate. I just hope these are empty threats and not acted out. But, the damage is done with respect to the UK video. Diminishing the evil of the Holocaust by using it for political argument is destructive of not only civil discourse but also the sacred memories of those who beg “never again.” I don’t stand with Tina, nor should anyone else.