Otsiningo Park in Binghamton, New York recently served as the site for the largest gathering of gas supporters in the state and fractivists were there to pass gas!

Binghamton held its annual Spiedie Fest & Balloon Rally at Otsiningo Park this past weekend. The annual event is described as “a spirited cook-off of local food and a balloon rally,” a celebration of community.  In the midst of this, Citizens Action, an astroturf organization of fractivists funded by the elitist Democracy Alliance, rented a spot to dispense its propaganda along with the food and entertainment provided by others. Can you imagine the talk at their tent” Well, If you have been around this debate as long as I have, you’ve probably, like me, learned how to parse the words of these fractivists, who never quite say what they really mean.

Now, keep in mind I didn’t visit the tent myself as I quit talking to brick walls long ago, but I’m thinking it could have easily gone something like this:

Fractivists:  Hello, can we give you a pamphlet on how bad natural gas is and the dangers of fracking? We need to end our use of fossil fuels, you know.

Spiedie Fest Attendee: Uhhhh…I guess so, but isn’t this a cook-off and hot air balloon event?

Fractivists: Yes, but the balloons and grills you see in use here rely strictly upon approved gas.

Fractivist: It’s gas we approve, silly. As educated people we get to tell others what is best for the community. Our job is to protect uneducated landowners from themselves.

Fractivists:  No, only the ones who refuse to accept our direction. After, our program is supported by some pretty powerful people, you know. The Rockefeller, Heinz and Park families are all behind us, for example, and so is Google. Who the heck do they think they are, opposing us?

Spiedie Fest Attendee: Well, that seems might haughty on your part; what’s the problem?

Fractivists: Look just sign our petitions and put your friends’ and families’ names down, too. Don’t be asking all these questions or we’ll have to assume you’re a stupid landowner yourself.

Ok, so I exaggerated a bit to make my point, but you know darned well that’s how they real see us. Here is the irony, though.

Note the flaring of the approved gases in this photo, also captured in another very nice Binghamton Press Connects photo found here.  There wasn’t one solar powered balloon all weekend at the Spiedie Fest & Balloon Rally, at least so far as I could determine. Where were the protestors hollering about all the carbon releases into mother earth’s atmosphere? There were hundreds of balloons burning huge quantities of liquified petroleum gas (propane) purely for enjoyment. None of this seemed to bother the folks from Citizen Action, though.  There were no protests of this gas use because it provided an opportunity for them to propagandize.

It wasn’t just hot air balloons that were using gas. Vendors with gas grills and burners were to be found everywhere, serving up the deli special of the weekend “Spiedies” to an estimated 80,000 supporters of natural gas. I mean after all … there was not one protestor there telling anyone that this gas filled weekend put on by the joint efforts of the City of Binghamton and Broome County Government was wrong. Nor were any of them demanding clean solar energy, if there is such a thing, be used to cook those spiedies. No, they were cooked with gas. 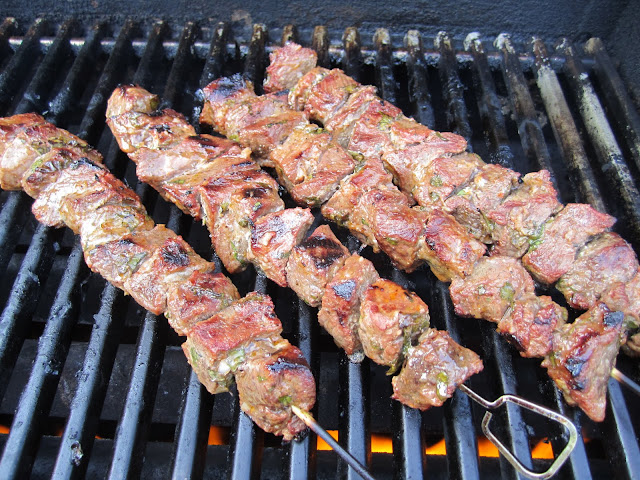 Look, also, at the picture below of the City of Binghamton as the sun sets.

Some of those lights you see are coming from the homes of fractivists who buy into the rhetoric of the professional protestors from Citizen Action. There are no windmills in the background, no solar arrays on their roofs, and, if you read what the Binghamton wiki web page has to say you’ll see were all that light comes from:

They certainly had the right to set up a table at this event, but where did they get the nerve to mock our city and our way of life by opposing the use of gas while they sat there amidst hot air balloons and gas grills that demonstrate our reliance on things like natural gas and propane?  Where were their bicycles? Where are the caves they live in? They always arrive in cars powered, one way or another, by fossil fuels and they heat and light their homes with them as well, all while screaming at anyone who wants to harvest those resources. There’s nothing wrong with renewables or passionate advocacy for them, but don’t be passing out anti-gas literature in the midst of a festival and rally dependent upon them.

Also, Governor Cuomo, please take note; there were, in reality, 80,000 or so gas supporters in Binghamton this weekend. So, why are you listening to the handful of paid fractivists opposing the gas usage all around them? Do you think they appreciate your stance? No, they are never satisfied unless you’re ideologically pure and hypocritical like them. Most of them are supporting Zephyr Teachout for governor, in fact. Maybe you should start paying more attention to the 80,000 and a little less to the radicals in the the Citzen Action tent. They were just there to pass gas.