Obfuscation is the obscuring of intended meaning in communication, making the message confusing, willfully ambiguous, or harder to understand. It may be intentional or unintentional (although the former is usually connoted) and may result from circumlocution (yielding wordiness) or from use of jargon or even argot (yielding economy of words but excluding outsiders from the communicative value). The word can also mean to render obscure, unclear, or unintelligible, and bewilder (someone) as in the following example: “her work became more and more obfuscated by mathematics and jargon.”

The focus here is on intentional obfuscation here – fractivist obfuscation.  Simply put – intentional obfuscation is not a lie.  But when you have been obfuscated you will understand the Italian definition of innuendo (suppository).  Now, when some people of arts and letters, like lawyers, get to mathematics – the situation can become one of “lies, damned lies, and statistics,” a phrase sometimes attributed Benjamin Disraeli (British Prime Minister back in the day) and popularized here in the Colonies by Mark Twain.

This all came to mind earlier this year when I went through a presentation by the Conservation Law Foundation (CLF) titled The Natural Gas “Crisis:” Dispelling the Myths.   The focus is New England.  The presentation was made by Shanna Cleveland, a Senior Attorney with the group and was obviously designed to convince New Englanders there’s no need for those proposed new natural gas pipelines to alleviate the region’s shortages and resulting seasonally high energy prices.  To a discerning reader – the title says it all. Shanna will instruct you on what the myths are (really???…those are the myths???) and then demonstrate how to “use statistics to bolster weak arguments.”

In short, when you see a CLF lawyer wheel out statistics, duck and cover.

The presentation uses numerous slides which are rich demonstrations of obfuscation.  There are two, in particular, worth focusing on.  Here’s a reproduced version of the first (the actual is too blurry for use) with my own cautionary label superimposed: 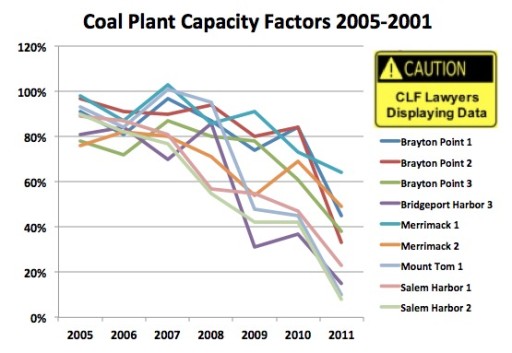 This slide is made from data the CLF secured from the Public Service Company of New Hampshire and is designed to give the impression coal plants aren’t really being used much anymore.  It is apparently intended to bolster the argument these plants can be closed without much worry about the energy requirements here in New England.  That inference is not true and about as far from the truth as one can get.

What happened over the timeframe from 2005 to 2011?  New England, and specifically Massachusetts, began to retire, without replacement, some coal plants, and to replace other electricity generating sources with natural gas – which most of us think of as a pretty darned good idea.

Now – here’s the obfuscation on “capacity factors.” Because of the situation with natural gas in the winter, what happens is the coal plants (what’s left of them) are fired up in December and run till about March, at or as close to full capacity as possible, such that they run at about 33% capacity for the year as a whole.  Last winter was particularly brutal for low temperatures throughout New England.  Brayton Point is a huge electricity generating station.  Without it running, it is unclear if the grid would have remained operational and it’s scheduled to close on June 1, 2017, a little over 17 months from now, but the CLF would have us believe it’s not necessary.

Now, here is the second slide demonstrating obfuscation. It’s even worse because it’s deception is compounded by the hidden facts of the first slide):

I cannot locate a list of the ISO-NE’s specific “at-risk units,” but, presumably, it includes some of the same plants charted above and I can mathematically derive the important numbers.  The table is used by CLF to suggest that not only will the coal plants not be missed but neither will the Vermont Yankee nuclear facility closed late last year, effectively doubling down, sorry to say, on the obfuscation.  Why? Because, Vermont Yankee ran at very high capacity compared to the others. Vermont Yankee, in fact, could have run at a 98% capacity factor for the year 2012 with the above table showing but a 12% average capacity factor for the year!  Magic?  The formula for yielding such a result is Obfuscation = CLF lawyers + statistics = Beware.

Let me explain. Vermont Yankee was capable of generating 600 MW in round numbers.  Keeping an eye on the Nuclear Power Plant situation is the Nuclear Regulatory Commission (NRC).  Here’s their capacity factors table for the years 2008 to 2013:

The CLF took the ISO-NE numbers, a compilation of a large number of “at-risk” plants running at about 5.8% capacity with the addition of one Vermont Yankee plant running at 92% capacity to yield an average capacity factor of only 12%. The average, of course, is dominated by the large number of “at-risk” plants operating at 5.8% capacity, even though the Vermont Yankee managed to more than double that 5.8% to 12%,

Guess what CLF focused on? They got what they wanted out of the statistics – a really small number of 12% that hides not only the seasonal importance of those closing coal plants, but also the big contribution of the Vermont Yankee facility. They used the statistics to make unsubstantiated claims, obscuring the root truth and big danger we face in the process.

The number of “at-risk” plants is on the order of 14 in total; each one with a theoretical capacity of about 650 MW.  The math to get to 1,079 MW of actual power generation represented by these closed and closing plants in 2012, even with Vermont Yankee at 92% capacity looks like this: 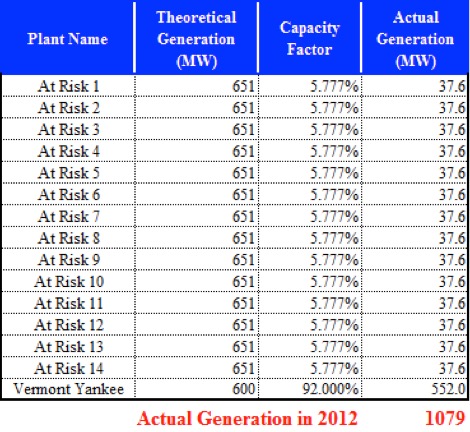 As this simple table illustrates, more than one-half the actual generation already lost or being lost came from Vermont Yankee and we’re now about to lose another 1,494 MW when Brayton Point closes. We’re, in other words, closing one energy door after another with no replacement power in sight other than a utopian faith that wind and solar will somehow save us combined with a more practical reliance on more LNG. Yet, the CLF is out there manipulating the statistics to suggest “Don’t Worry – Be Happy,” as “we don’t need no stinkin’ pipelines.”

Editor’s Note: Pat is the master of examining others’ data and has keyed in on the fractivist obfuscation being practiced by the Conservation Law Foundation. Who is the CLF? Well, the dark-money fractivist kingpin funder, the Energy Foundation gave it $490,000 since June, 2013 and an incredible $2,262,000 over nine years according to this extremely revealing rundown on the group. The Rockefeller Brothers Fund, another gentry class funder of fractivist obfuscation, has given it $150,000 since 2011 and the Rockefeller Foundation has reportedly provided it $1,145,000 over eight years. Plus, it earns money through consulting and insurance side ventures. It is, in other words, just another fractivist shill group intent upon fighting change and preserving social privilege by making a wilderness of New England. What better way than to starve the region of energy for any newcomers and ensuring the existing riffraff has to pay so much for it that it will be forced to leave,

2 thoughts on “Fractivist Obfuscation and Other Statistical Trickery”