Fractivist enablers in the media have faithfully spread the message and interpreted events in opponents’ favor. StateImpact Pennsylvania is such an enabler.

Anadarko Petroleum owns mineral rights for 25,000 acres of the Forest. Anadarko presented a plan in March 2012 (!) to drill there, a plan that STILL has not been approved by the Department of Conservation and Natural Resources (see PA DCNR Blocks Drilling in Loyalsock State Forest – For Now). Finally, there have been some baby steps toward granting Anadarko access to what they legally have a right to do. 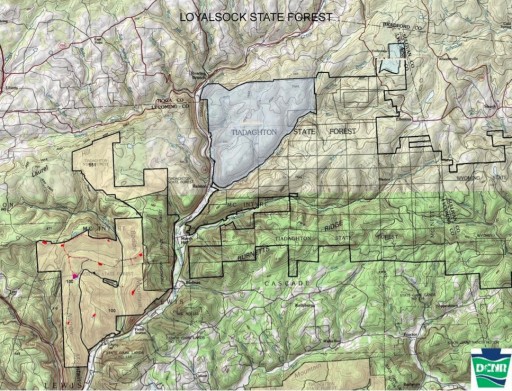 How do those baby steps get spun by StateImpact? As some sort of furtive, shifty collusion between DCNR and Anadarko (and Southwestern Energy, who also owns mineral rights in Loyalsock). The opening paragraph:

Controversial plans to expand natural gas drilling in the Loyalsock State Forest are quietly moving forward. Last month the state Department of Conservation and Natural Resources, which manages drilling on public lands, met with two gas companies who own mineral rights there.*

Yes, the stage is set. It was a “quiet” meeting–apparently because they didn’t blow trumpets and ask StateImpact and the anti-drilling so-called environmental organizations she’s writing for to attend that private meeting. That, for Cusick & company, is evidence of cover-up–trying to pull a fast one.

She then recounts a contentious meeting held last year where “nearly 500″ attended and everyone but everyone was dead set against any drilling Loyalsock. The implication is, nothing has changed. Nobody wants it. But if we have to have it, severely restrict it. And tell us with plenty of time to spare so we can demagogue it some more.

The genesis of this latest planted story appears to be a coalition of a few far-left anti-drilling groups, including the Sierra Clubers and PennFuture–part of something called Save the Loyalsock Coalition. The Coalition was briefed by the DCNR, as a courtesy, after the meeting last month with Anadarko and Southwestern. The anti-drilling Coalition wants new red meat to eat–a copy of the latest updated drilling plan discussed at that meeting–so they can demagogue it in friendly media outlets like StateImpact. Anadarko and Southwestern aren’t playing along. Neither is DCNR–and that frustrates the bejeebers out of the enviros.

And, so another story is planted/born that tries to spin the situation as furtive and shifty–like the drillers are hiding something.

Editor’s Note: Many Pennsylvanians don’t realize many of our state forest and game lands were acquired for a pittance because the landowners who sold the property to the Commonwealth retained ownership of the mineral rights. Some of my distant relatives, in fact, still own mineral rights to state land which our common ancestors owned in the 1800’s. It was land that was logged for purposes of supplying acid factories and that sort of thing.  Now, radical environmental groups want the public to believe those mineral rights don’t matter even though their retention was the very reason the public was able to afford the surface rights. Property rights, of course, don’t count with “watermelon” type fractivists (green on the outside and red inside) and NPR, coming from the same mindset, is not about to parade that fact.

It’s also important for readers to know the group PennFuture is the force behind the Save the Loyalsock Forest Coalition. PennFuture is a project of the Heinz Endowments and the William Penn Foundation and is part of a “strategic parkification” campaign by those two organizations to stop development everywhere and further its own special interests.  A superb roundup on this fractivist group, can be found here. It’s also worth noting Wilkes-BarreTimes Leader Editorial Page Editor, Mark Jones, another of the many fractivist enablers (see this example of his work for the proof) is married to Pam Fendrock, the Web and Outreach Coordinator at PennFuture. Very convenient.