NIMBY opponents to a NG Advantage facility in Fenton are forced to face reality; it is the alternative to pipelines certain fractivist clowns had stopped.

There was another meeting in the Town ff Fenton, Broome County, New York, the other night on the subject of the NG Advantage natural gas transfer station to be located on the service road near Port Dickinson. Land preparations have already started, so the meeting was really but an opportunity for local NIMBYs to vent.

They attempted to do so, but it quickly became clear they were too late. I took the opportunity to explain why it is Fenton is getting a NG Advantage transfer station; because certain fractivist clowns and one corrupt governor have prevented the development of the Constitution Pipeline, among other things, that have delivered the natural gas where it is needed in another way – the safest way known. 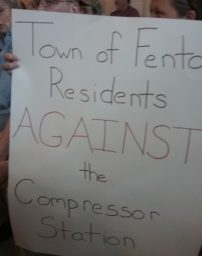 Attendance at this the meeting was probably double in size compared to the one I attended two weeks ago. I sat near the back, somewhat alienated, as I heard people say “he was here before, he is in favor,” “he works for them, I saw him talking to the owners n the parking lot.” The misinformation spread through the crowd like measles in a 1955 grade school classroom. I don’t work for the gas industry or anyone but myself on this issue and never have been paid to attend a meeting on gas issues. I am passionate about the issue but no one pays me a dime.

The meeting opened with short remarks from the Town of Fenton Supervisor. “Good evening folks,” he stated. “We are here to take a few questions from you on the project the Town of Fenton Planning Board approved. Before we start, though, I must tell you as a town board we cannot override the Planning Board’s approval of the transfer station. It is a done deal that we can not change.”

Many members of the crowd began grunting and groaning. The room was filled with comments, some whispered and some not of “then, why are we here?” The first person to speak, in fact, asked “Why didn’t we hear anything about this until this week when it was in the news?” The town supervisor suggested they might have attend the planning board meetings or read the announcements in the paper, all of which took place over several months. The project is not new, in fact, the planning board having put out a 39-page document complete with public statements and concerns from the school board, months ago. Ironically, many of the people there Identified themselves as teachers or school board members, which made their complaints more than a little hollow.

They also complained there was no audio system and people couldn’t hear what was being said. Nevertheless, I was there in the back of the room and, because I was alone, I could hear everything, as I wasn’t talking with others while people were speaking. The crowd was unruly, shouting out insults as the town supervisor was speaking. “What’s your kickback?” shouted one. “Its all about the money” hollered another. “You can’t do anything? Well, we can and you’ll find out on election day.” 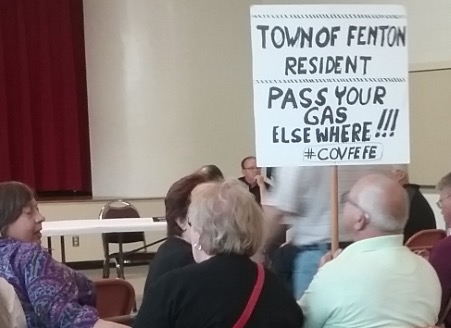 Such remarks interrupted discussion several times as the supervisor and even as opposers to the project spoke. The meeting had to be stopped to bring order. Not one person in favor spoke! I would have, but, because of the unruliness of the crowd, the supervisor simply ended the questions after having to raise his voice several times.

If you didn’t think I would speak because the meeting was over, though, I did – outside. I talked to a few people in the hall and then went out into the parking lot where many had gathered to talk about their disgust over the meeting and how they were going to move forward. I couldn’t resist responding.

My voice booms a bit so I spoke up and over them, delivering my little rant:

“Where are the clowns? Where is Walter Hang from Ithaca, tonight? Where are those protestors from Pennsylvania, the Unitarian Church in Norwich and son? How did you, as people living in this community not know of all the meetings over the years, but they did? Where are those fractivist clowns tonight who take credit for stopping the Leatherstocking and Constitution Pipelines?”

“It’s not NG Advantage that’s you should be angry at, it is those people who were here in force at the last meeting, the people who put this wasted fear in your hearts, They are the ones who stopped the Constitution Pipeline, the Leatherstocking Pipeline and others! It is because of the lack of these pipelines that a virtual over-the-road pipeline is being built by NG Advantage to service our factories here in the Northeast.”

After I finished there was a voice from the crowd of people gathered in the parking lot who who spoke up to reply. He uttered but two simple words that silenced the crowd. “He’s right,” referring to my accusation on stopping the pipelines. The man who spoke those words was one of the strongest voices I witnessed in opposition to the station at the last two meetings. But, he understood, he got it.

The opposition from fractivist clowns such as Vera Scroggins, William Huston and Craig Stevens (who leased his own land for pipeline rights-of- ways) some of whom made explosive comments about “bomb trucks,” while celebrating corrupt Governor Andy Cuomo’s job killing decision to not build pipelines, clearly led to NG Advantage’s proposal. They knew those decisions created the need for gas transfer stations to keep the Raymond Corporation, Amphenol going and to heat local schools and hospitals, but these fractivist clowns have opposed the pipelines because they hate all forms of oil and gas development. They effectively created the NG Advantage proposal by their blind, unreasonable opposition to everything and when all was done they simply moved down the road to the next protest and next opportunity to get their faces in the news.

If I were NG Advantage (not really, but it’s fun to think about) I might send these fractivist clowns a great big bouquet of green ferns and thank them for allowing — no, helping — their business to expand here in the Northeast where pipelines are verboten. Meanwhile, I can only reflect on the truth of that cliche about Karma being something or another… 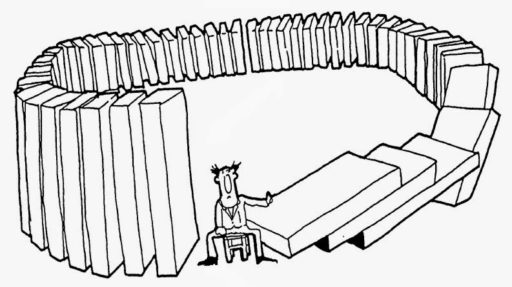 24 thoughts on “Where Are Those Fractivist Clowns Now?”