Freedom is not acquired on the cheap, but is, nonetheless, regularly abused by those who don’t value it and the fractivist abuses of that freedom are among the worst.

December 7, 1941 was the day the Japanese bombed Pearl Harbor engaging America in yet another world war threatening our freedom.

Exactly 73 years later America is still engaged in war with extremist forces – a war against fracking and the rule of law. The extremist forces this time are far less powerful but are found right inside our country. A tiny battle in this war took place in Bainbridge, New York last Wednesday, ostensibly over the subject of the Constitution Pipeline. The battle lasted from 7:00 am until 11:00 am and victory went to the rule of law.

Fractivist Abuses of Freedom at the Battle of Bainbridge 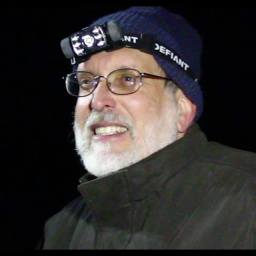 I’ll refer to this tiny incident as the Battle of Bainbridge, for the sake of the radical fractivists who envision themselves as revolutionaries and saviors and are determined to impose their views on the rest of us. Their gigantic egos demand the recognition. Bill Huston, the Binghamton fractivist who has adopted fracking as one of his pet causes (see video of him in action here), reported on the battle on his blog, right between a post entitled “Cancer” Is a CURSE Disguised as a Diagnosis and another on the Battle of Seneca Lake (these people love war) where he excitedly tabulates statistics on the latter “blockade.”

Excerpts from Huston’s report on the Battle of Bainbridge follows, along with my analysis:

At Bruce Baxter’s property in Bainbridge NY (Wednesday) when 2 dozen Defenders showed up to keep Constitution Pipeline (CP) crews off the land, there was a legal determination made by the State Police that the drilling crew from CP were legal due to a DOT permit they had in-hand.

They blockaded from Sunrise/7AM until about 11 am. Suddenly, several people had to leave, and it seemed evident that we had scared off the crew.

OMG, they scared off the crew…. or maybe it was break time? Huston’s thrill at the notion he’s been in battle and won a great victory for having “scared off the crew” is nothing short of pathetic. These fractivists imagine themselves in the role of Mel Gibson in Braveheart, but they’re more like children playing Cowboys and Indians.

However, shortly after most or all of the Defenders left, a drilling rig showed up along with several service vehicles and a crew to direct traffic. Cops were called. Drilling test bores for horizontal drilling required for going under the road commenced.

The “Constitution” pipeline was just issued a Certificate of Public Convenience and Necessity by the Federal Energy Regulatory Commission (FERC), despite that dozens of outstanding issues raised during scoping have not been adequately addressed in the FEIS.

The question is whether the DOT owns the land, or just an EASEMENT. IMO, this question is complex, & requires a court to determine. Yet the police, with insufficient facts, decided the permit was legal and chose to side with Constitution Pipelines right to drill, over the Landowner’s Right to defend his land from trespass.

The contractors, in other words, had properly issued permits that ended the four-hour standoff in boring fashion as the rule of law prevailed. One wonders what part of “permit” these fractivists don’t understand. 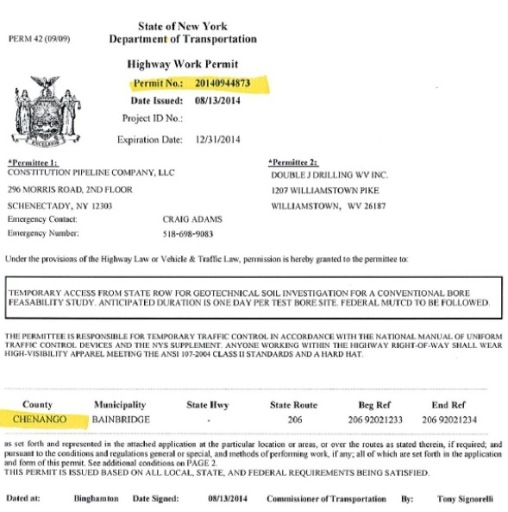 These “Defenders” were nothing more than trespassers themselves. They suppose any conclusion of the FEIS with which they disagree is excuse enough to block a legally permitted project while also accusing the police of having “insufficient facts.” There is no room for different opinions or the rule of law in the world of the fractivist – their will is all that matters. These fractivist abuses of our freedom are laughable in many ways, but dangerously totalitarian in others.

The State Police threatened the property owner with arrest if he did not move his truck to allow the drilling to occur. The Commander in Chief of State Police is Governor Andrew Cuomo. The officer who made the determination was Sgt. Lennon, based in Sidney.

(I think that is a little bit weird, since John Lennon (author of Sgt. Pepper, by the Beatles) used to have a farm in Sidney. Yoko Ono and son Sean Lennon have been incredible friends to the Anti-Fracking movement in NY.)

Huston seems to asking “Am I weird or what…?” John Lennon, for the record, is dead but Sean and Yoko still live in the famous Dakota apartment building, which was among the first of New York City buildings to be converted to natural gas heat.

A Tirade Against FERC

Huston then launches into a tirade about FERC:

I consider this permit for the so-called “Constitution Pipeline” really a Declaration of War against We the People made by rogue agents within the US Government on behalf of private, profit-seeking interests. 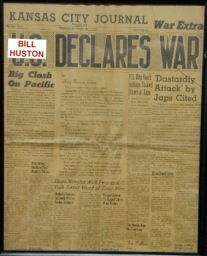 He proceeds to offer his own legal analysis to explain why he says “FERC is a lawless, rogue agency.”

Read it for yourself, but it’s hardly convincing. It’s more of a crazed rant and series of outrageous accusations, but worth reading to see the contempt those who fight gas development have for their neighbors and fellow citizens by pretending to be many….when they are one and the same. It’s full of bolding, capitalization and underlining typical of children not getting their way.

Huston then takes it to another level with this:

The 4 sitting FERC commissioners are committing TREASON under COLOR of Law by SUBVERSION of our Constitutional Government on behalf of profit-seeking PRIVATE INTERESTS while putting many human lives at risk.

Treason is the highest crime known to our law.

Even President Barack Obama does not have much control of FERC.But he does control the U.S. Army Corps of Engineers, Headquarters, which still must issue a wetlands permit. So there is still hope.

Having exhausted his hyperbole, Huston then calls for action with this:

and asks his readers not to forget to sign his “Pledge to Resist the Constitution Pipeline.” I think most people will agree most petitions are not worth the paper they’re written upon. Who can forget Walter Hang’s “Petition to Ban Fracking” where over 35% of the signatures were not even from the United States, but from other oil producing countries?This Huston petition, pitiful as it is, doesn’t even reach that level of credibility.

A Pledge of Resistance or Just More Fractivist Abuses of Freedom?

Here’s the petition itself, which had a grand total of 104 signatures when I last checked:

We pledge, if necessary, to join others in our communities, and engage in acts of nonviolent civil disobedience that could result in our arrest in order to send the message to FERC Commissioners that they must take the voices of impacted residents seriously and reject the absurdly-named “Constitution Pipeline”, and subsequent gas infrastructure projects that unduly impact the health and well-being of our communities.

There are currently 104 signatures. NEW goal – We need 200 signatures!

It is becoming clear that FERC is an unelected and unaccountable agency, and the “public participation” in the permit proceedings are a sham. I am an intervenor in this project who lives in an area which would suffer large-scale regional impacts should this get built, against the wishes of the majority of people here. I have many friends and family who live in the gasfields of PA who have already suffered grave impacts, and development there would increase dramatically to supply this pipeline.

And, who do those signatures represent? Well, you can review the entire list at the MoveOn.org site. It includes the usual suspects such as Huston himself, Peter Hudiberg and Vera Scroggins, plus another 100 or so other individuals who make all sorts of silly observations they no doubt consider brilliant, but let me break it down for readers.

Some 23 of the signers were from outside of Pennsylvania or New York, the two states the Constitution Pipeline actually runs through. Another 74 or so signers appear to live well off the pipeline route (it’s difficult to tell in some cases without precise addresses). Only three of the signers appear to live on the pipeline itself, but let’s allow some benefit of the doubt to go to Huston and gang and call it seven. Here’s how things stack up under that scenario: 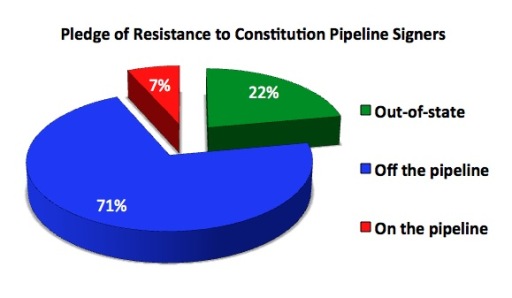 Bill Huston’s pledge of resistance, as one can plainly see, is meaningless, yet he professes to be the voice of “the people” and the “majority.” This delusional sense of self-importance is characteristic of the fractivist abuses of freedom. We tolerate it, because we must. We fought for the rule of war some 73 years ago and part of what we fought for were the rights of minorities to speak up and the freedom of all of us to protest. What we see from fractivists, however, is a remarkable attitude of intolerance and desire for their will to prevail against the rule of law. Fortunately, the rule of law won at the Battle of Bainbridge and I expect it will keep winning.

13 thoughts on “Fractivist Abuses of Freedom vs. the Rule of Law”