Fracking today is on display with the Purple Hayes wells in Ohio and the lesson is that fracking technology is destroying all the best arguments of its opponents.

If we could simply convince people that “fracking” doesn’t mean thousands of wells or hundreds of well pads, as so many fractivist groups in the UK insist will happen, we could then move on to a grown up discussion as to why are we using high carbon/zero tax LNG in the UK instead of the lower carbon high tax alternative onshore shale gas offers.

Anti-groups depend on a combination of fear, Photoshop and outdated images of fields entirely unrepresentative of what modern shale would involve.  Since so much of the fear is based on outdated concepts, what example can be used about what shale gas development actually involves?

Grealy’s First Law of Shale is that most things over six weeks old in shale technology are ancient history.  So I apologize in advance for using something from as far away as 12 weeks ago, the story of the Purple Hayes well in Ohio’s Utica shale. Oil and gas people like to add some rock to their rocks apparently.

PITTSBURGH—“Purple Haze” changed the landscape for rock guitar by introducing the world to an unparalleled talent in Jimi Hendrix. Similarly, Eclipse Resources’ Purple Hayes super-lateral in Guernsey County, Ohio, announced the Utica Shale in a major way when the company released the well’s figures earlier this year.

The well is the largest onshore horizontal lateral ever drilled in the country. It has a total measured depth of 27,048 ft that was drilled in less than 18 days, with a completed lateral extension of about 18,500 ft.

The State College, Pa.-based company has been rapidly expanding its lateral lengths—from 2013 to 2015, lengths increased 200% from 6,000 ft to 13,500 ft, according to Oleg Tolmachev, Eclipse’s senior vice president of drilling and completions, who spoke at Hart Energy’s recent DUG East Conference & Exhibition.

This figure is increased even more when Purple Hayes is factored in, jumping to 300%.

Not for the first time, and probably not for the last, this billboard from our friends at Continental Resources is instructive. This is the only visual UK fracking reports need, as opposed to pictures of demonstrators holding up irrelevant objections such as “Ban Fracking, Go Solar”. 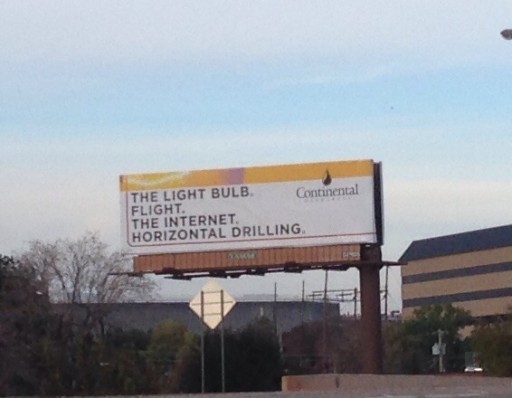 Horizontal drilling just doesn’t have that same naughty word fracking ring to it, but hydraulic fracturing is a tiny part of the story as Harold Hamm noted recently;

What has given us this energy renaissance in America is the horizontal drilling techniques that the small independent operators like my company developed.

Horizontal drilling has been used for years no further away than the North Sea. Offshore there are over 20KM laterals in Qatar and Sakhalin in the Russian Far East.  Back to the Purple Hayes story:

The Purple Hayes well oil rig could very well change the face of shale production, as it took just under 18 drilling days to complete from surface spud to grassroots total depth, which makes other drilling techniques in the region seem obsolete, Tolmachev said.

This from another story on the well:

“In drilling the Purple Hayes well to a completed lateral length of 18,544 feet, remarkably, in just 18 days,  with a 100% slick water completion design consisting of 124 stages or approximately 100 feet per stage – 150 feet per stage at a pace averaging over five stages per day.

“From a cost perspective this translates into a step reduction in total costs per lateral foot, which is almost 30% better than our lowest cost well previously drilled and far below any other company drilling in the Utica Shale.

“Our concept in drilling as well was to enhance the return profile of the Utica play by determining the technical limit of lateral length in the liquid portion of our acreage to confirm our estimates of total well cost. And finally to assess the recoverability per foot of lateral against our recovery seen in shorter 8,000 foot laterals to 10,000 foot laterals.

“After conducting a very extensive engineering review and redesign process which brought several innovative ideas together. We commence drilling this well at a lateral length that was actually a bit shorter than what we actually believe is our technical limit.

It’s clear that there are other lessons, for other places.

Perhaps most important, the technology used on the Purple Hayes well is transferrable to other plays beyond the Marcellus and Utica.

“This technology can be utilized in any play where construction and facilities infrastructure, as well as vertical well cost, are a significant portion of the F&D cost.

Such as the UK perhaps?  What if we draw a radius of 18,544 feet (3.51 miles, 5.65 kilometres) on a map of a UK location, chosen entirely randomly.  Then imagine that the well pad could hold many laterals going out as if from the spoke of a wheel. This is how big an area that size pad, perhaps two hectares at most at surface would cover.  To make clear, the red dot would be the only one necessary to produce local, lowest carbon and highest tax natural gas. 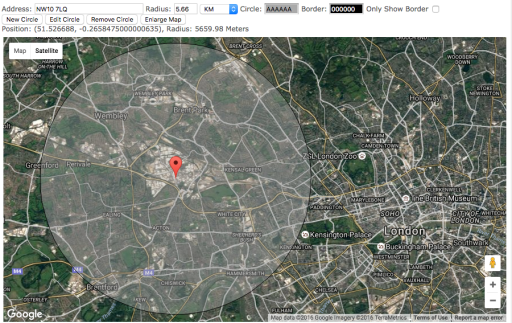 As technology progresses, and if geology allows, the area will be likely to grow. But one well pad, sited in an existing brownfield site, isn’t as scary as some might make out. Here’s a birds eye view of an actual well in Beverly Hills. 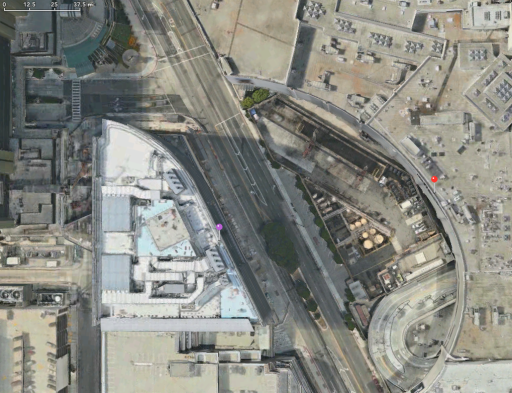 Thanks to another great technological development, we can go to Street View. Hope this map makes clear how difficult some wells in the US are to find. 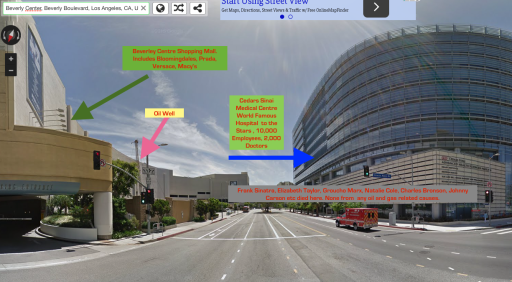