As Independence Day approaches, Dan Markind reflects upon the fracking politics, which is always part of the shale gas mix.

It may only be June but the political campaign in Pennsylvania is in high gear concerning the possibility of replacing the State’s hybrid local impact fee system with a statewide mineral extraction tax.  Already part of the campaign platform of PA Democratic Gubernatorial candidate Tom Wolf against incumbent Republican Governor Tom Corbett, the issue has gained additional traction as Pennsylvania struggles with a $1.7 billion budget deficit.

The Republican-controlled Assembly voted to privatize Pennsylvania’s antiquated, curious liquor industry and to enact numerous one-time fees, but the Senate is balking and demanding an extraction tax.  The industry is going all-out to prevent a statewide tax, taking out advertisements noting that the industry has generated $2.1 billion in tax revenue since 2007 and $630 million in local impact fees since 2012.

In truth, the larger question concerns Pennsylvania’s overall business climate.  While we do not have a mineral extraction tax like Texas (a fact constantly pointed out by proponents of the tax), in general Pennsylvania presents a poor business environment, including a state corporate income tax of 9.9%, one of the highest in the nation.  Extraction tax proponents are correct that in and of itself the tax will not force business out of Pennsylvania, but if the levy becomes substantially higher than the current impact fee any development on the margins or new explorations may take a hit.

Also not mentioned much in the public debate is the question of who gets to use the revenue generated from the fee or tax?  Contrary to Republican policy positions, most people in this country, and certainly most in Pennsylvania, are not adverse to some additional taxes.  This was shown clearly when every Pennsylvania municipality that could impose an impact fee – every one – did so.  What’s at issue is what you get in return for the fee or tax and who gets to control it? That’s where the fracking politics come into play.

The current system returns most of the fee to the affected municipalities, although all parts of the Commonwealth share in some monies.  A statewide tax most likely would just put the money in the State’s general fund, where it would be used for whatever the Governor and the Legislature decide (Philadelphia School System, State Pension Obligations etc.). 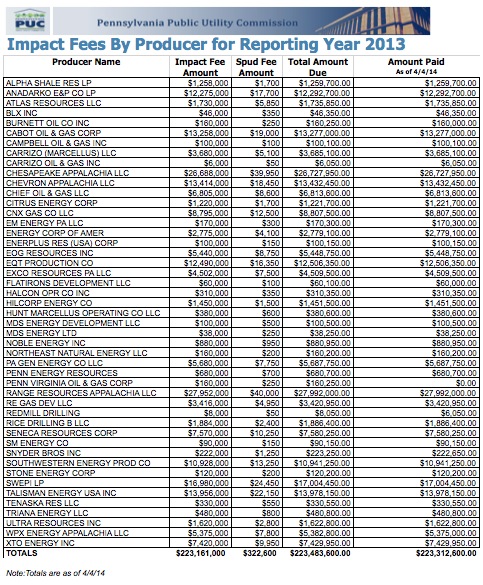 This is very much opposed by the majority of rural residents in Pennsylvania, counting for most of the Marcellus Shale communities.  They do not want taxes that relate to an industry directly affecting them and their way of life to be controlled by people for whom the impact is purely tangential.  They see money generated from their communities being used to fund the pet projects of big city politicians, which they want no part of.  It is this divide, not the tax/no tax divide, that both will decide this issue in Pennsylvania and will reverberate throughout the nation. It’s fracking politics at the foundation.

Continuing in Pennsylvania, earlier this month a State Environmental Hearing Board ruled that Range Resources must disclose to all potentially affected residents of the Yeager Marcellus Shale site in Washington County, Pennsylvania all the chemicals used at the site, down to the kind of oil used in engines of vehicles visiting the site.

The order relates to litigation brought by residents who sued Range in May 2012 claiming their air and drinking water had been contaminated by Range’s operations at the site.  Last November, County Judge Debbie O’Dell Seneca gave Range and its contractors 30 days to disclose all the chemicals used at the site.  Range appealed, resulting in this month’s ruling.

Judge Thomas W. Renwand of the Environmental Hearing Board determined Range is in non-compliance with a July 2013 Board directive to Range to deliver the list of chemicals and that Range is in the best position to obtain this information.  He also stated it is “particularly troubling that neither Range nor the Department of Environmental Protection is fully aware of the chemical composition of products being used during gas drilling and hydraulic fracturing operations.”

I have commented innumerable times on the importance of the disclosure issue – which, along with the tax issue and the municipal land use/zoning issue make up the hydraulic fracturing hot-button holy trinity.  Yet again, I will suggest that for the industry at large, more disclosure is better than less.  Further, little is destined to arouse and maintain the suspicions of the general public in non-historic energy states like Pennsylvania and Ohio than the feeling that a producer is not being forthcoming about the chemicals it is using.

Next to Pennsylvania, in New Jersey, the State Assembly overwhelmingly passed a bill to ban the treatment and disposal of hydraulic fracturing waste in the State.  The Senate already had passed the bill, which now goes to the desk of Governor Chris Christie.  Governor Christie vetoed similar legislation in 2012, but this time each House passed it with enough votes to override a veto.  In addition, the political situation is different now as Governor Christie is weakened by the George Washington Bridge scandal.  It will be interesting to see which way the Governor decides given the current political realities.

Out west in Colorado, Governor John Hickenlooper is trying to devise a better system to regulate hydraulic fracturing than currently exists.  At this time, municipalities are at odds with the State over who has the right to control oil and gas drilling, with certain communities such as Larchmont and Fort Collins voting to ban hydraulic fracturing entirely.

In an effort to avoid a fight over November ballot initiatives, Governor Hickenlooper, a Democrat yet strong industry supporter, may call the Colorado legislature into special session to pass legislation ahead of the election.  The initial proposal was to cede greater power to municipalities to regulate, but not ban fracking.  Recently, the proposal was tweaked to protect homebuilders.  An announcement on this may come soon.

Or course, all of this comes against the international backdrop of the events in Iraq and the Middle East and the potential for massive energy production disruption from there.  What is being done here in this industry helps strengthen our national security and economic vitality.  It is in everybody’s interest to make sure we protect our ecologic vitality as well, and in doing so ensure a positive future for everyone.

Happy Independence Day to all!

Editor’s Note: While it is absolutely true more disclosure is better than less and the industry can do more in some cases, it is not clear there is anything reasonable at all about the rulings in the Range case. What is astounding is not that Range and DEP don’t know every single chemical used on their site, but that the naive judges are astounded this is the case. We don’t and can’t know, after all, every single chemical in a can of Coke.

There is no homeowner or business in America who could possible know every single constituent of every single product they own. We can know all the products and there are MSDS sheets readily available for all of them to tell us what their makeup is, but not necessary every constituent or the precise mix. That is true of thousands of products we consume every day without even thinking about it.

Why, because there is such a thing as proprietary information that we’re entitled to not disclose to protect our inventions from being stoled by by others after we poured the money into developing them. And, guess what? Even the Frac Act desired by industry opponents provided for that protection. I wrote about this two years ago at EID and used this example:

Consider, for example, something known as Solid Green #78 Glass & Neutral Cleaner which is designated by the EPA’s Design for the Environment program as one of several “products that perform well, are cost-effective, and are safer for the environment.”  It’s also listed on the Healthy Schools Campaign website as a recommended school cleaning product that meets “green standards.”  Yet, here is the relevant portion of the Material Safety Data Sheet (MSDS) for this product:

Not a single ingredient in this formulation is disclosed.  Still, there is a MSDS and a review of the entire document indicating it provides all the essential information about the product, including hazards, safety procedures and control measures. One can easily conclude it’s safe from the information provided.  Such is the way the system works, even for designated green products. Proprietary information is protected, while essential safety data is disclosed.  It’s a balance essential to progress.

Now, suppose Range used Solid Green #78 Glass & Neutral Cleaner on its site. Just how would it go about disclosing that to the court? That’s the dilemma, however valuable full disclosure may be. It wouldn’t be solved by hydraulic fracturing companies making all their precise ingredients known either, because there will always be things like Solid Green #78 around that don’t.

One thought on “Fracking Politics Intrudes As Always”