Opposition to fracking has peaked and the movement is cracking up.  Stars of the movement are turning angry and acting out in more and more bizarre fashion in desperate attempts to grab the attention that is their mother’s milk.

There is, as we noted recently, plenty of evidence the fracking opposition is cracking up. Josh Fox is out there attacking all his natural allies for not being pure enough. Meanwhile, other fracking opponents are descending into absolute absurdity.

The latest example comes from Franklin Forks, Pennsylvania, where a “rally” of what appears to have been less than a dozen people took place at the home of the Manning family to protest the expected removal of water storage units placed there by WPX. The units no longer have a purpose because the Pennsylvania DEP has determined the methane problems in that vicinity relate not to the impact of gas drilling or fracking but, rather, natural conditions that have been on record for decades and a malfunctioning water well WPX offered to help repair despite its lack of responsibility. The Mannings refused the help, apparently because it might detract from their lawsuit; an altogether too familiar occurrence whenever potential plaintiffs see a deep-pockets defendant in front of them.  It’s sad but, unfortunately, a normal part of our litigious American life these days.

This Franklin Forks rally was the second in a week at the same location.  The first one brought out more pro-gas neighbors than protestants; neighbors who are fed up with the name of their community being dragged through the mud, fed up with trespassing activists and New Yorkers telling lies about their community and fed up with a woman named Vera Scroggins (pictured below) and her deception.  Scroggins is a rent-an-activist type at the service of any cause that will deliver her notoriety, an attention-starved leftover from my 1960’s generation who yet thrives on rebellion. 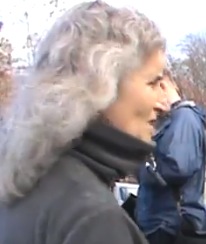 The cause is immaterial but, for the moment, she’s on the fracking kick, and it’s working, but requiring ever zanier behavior to pull in those cameras.  Indeed, this latest fiasco was apparently captured only by her own camera, which is ever in the service of hyping her supposed role as the protesting granny, a story line some naive out-of-town media outlets still buy, but one to which local television stations are now wise.

This latest Vera venture brought out a handful of individuals, including the Mannings, some neighbors, serial protestor Alex Lotorto, and Isaac Silberman-Gorn, the New York doctor’s kid who is paid by the radical Democracy Alliance to do this sort of thing. A gentleman named Robert Lee McCaslin, who says he’s a native elder and/or faithkeeper with the Little River Band of Ottawa Indians, was also there to conduct a prayer service.

McCaslin is a fairly well-known fractivist, but his ostensible purpose this past Wednesday was to pray for healing. That suits most of us just fine, but one of the chief chanters at this ceremony, and obviously the organizer, was the one and only Vera Scroggins, who also claims to be a member of Atheists of Binghamton. How does one call for prayer, chant prayers and recommend prayers as an atheist?  Is it just me, or do we have a bit of chicanery here on her part?

Check out the video yourself, especially at 14:00 when Vera says “Let’s pray,” followed by “just make sounds” and at 26:35, when she leads some chants and prayers as the group walks down the street.  You might also want to contrast Tammy Manning’s remarks at 6:40, where she asks “why do we need all this energy, anyway” and suggests we should go back hundreds of years, with McCaslin’s excuse, at 23:20, for using a butane lighter to stoke his pipe, because “it’s the new way of life” provided by the Creator.

So, a serial protestor from Pike County (where there is no gas), a paid protestor from Binghamton and perhaps a half-dozen other people gather together to pray, the whole thing having been organized by a natural born protestor from Elizabeth, New Jersey (you’ll note Vera’s never lost the accent despite moving to Susquehanna County a while back) who is an atheist.  Get it?  If there was any further evidence the fracking protest movement is on its last legs, this is it.  They’re cracking up.

Vera, of course, is a crack-up magnet.  She thrives on the controversy, what a former associate of mine used to describe as “throwing a white rat on the evening dinner table” for the shock value.  She’s not only an atheist who prays when it’s convenient toward that end, but also a foul-mouthed instigator, as when she deliberately blocked at a fire entrance at the movie theater her daughter manages and where FrackNation was being shown.  Or, when she earlier made a spectacle of herself shouting obscenities and bigoted remarks at the producer of that film, Phelim McAleer.  Or, when she refused to honor protocol at a Susquehanna County Commissioners’ meeting.  And, then, there’s this.

She’s been on quite a ride but ordinary folks have had it with her and now show up to protest her, thank goodness.  Oh, there are still plenty of left-wing, activist types who will buy her schtick and there’ll always be some incredibly shallow New York legislator signing up for her tours, but the game is largely up.  The long slow crack-up began with Vera’s video of herself yelling obscenities at McAleer, but it took another nosedive when an alert Senator Perkins took note of her dissembling about an algae bloom in the creek that flows through Franklin Forks (as did WBRE television) and reached a new low with this latest stunt, which attracted no media attention.  As the WNEP headline said “Activists Wearing Out Welcome.”

22 thoughts on “Fracking Opposition Cracking Up”