Fracking opponents not only try to advance their case with a combination of junk science and scare tactics but are also two-faced in how they go about it.

Yesterday, we reported on one of two pieces of fracking junk science being hyped by the “Rockefeller Racket’s Catskill Landkeeper Division.” The other study they are crowing about is this one and their comment on it starts off with a complete falsehood about Allegheny County being “heavily fracked” when, in fact, it has a grand total of 30 active wells:

A report released last week by the University of Pittsburgh Graduate School of Public Health’s Center for Healthy Environments and Communities said that heavily fracked Allegheny County is in the top 2 percent in the United States for cancer risk from air pollution, and in hot spots within Allegheny County, the cancer risk is up to 20 times higher.  The report determined with certainty that Allegheny County’s air toxics problem presents a serious threat to people, as well as the environment.

Leaving aside the Catskill Landkeeper’s fabrication, It turns out this study is even worse than the other, but not for the reasons you might think, as it says nothing detrimental about fracking (which means the Landkeeper lied twice in one short paragraph). It is, however, funded by the Heinz Endowments, which, like the Rockefellers and the Park Foundation, is committed, under Teresa Heinz Kerry’s new re-assertion of leadership, to destroying the natural gas and other fossil fuel industries and this study is aimed at that objective, notwithstanding its lack of attention to fracking.

The Two Faces of Heinz on Fracking

The first tip-off the second study is nothing but junk science is found at the very end where the report, prepared by the Center for Healthy Environments and Communities (CHEC) at the University of Pittsburgh, where the final words, in very fine print, are as follows:

Lastly, we are grateful to Dan Volz, DrPH, for his guidance and vision of a tangible environment that is accessible through both scientific literacy and humility.

Dan Volz exited the University of Pittsburgh because his rabid advocacy in opposition to fracking, for which the University held him to account.  You can read all about it here. There’s more here, indicating exactly why the guy had to beat an ignominious retreat. Tellingly, the video that played such a part in the story had to be taken down because the fractivist who originally posted it, would no longer allow its use. Here’s a shorter clip, however, where Volz, says the science doesn’t matter:

The Heinz Endowments funded the CHEA under this man’s leadership, just as it has funded so much else of the fracking opposition.  And, it’s not a coincidence. The CHEC is only about science as an afterthought.  Read their “About Us” page and you won’t find the word. It’s all political action clothed with the robes of academia.

The fact the CHEC honors Volz still today is evidence nothing has changed despite a very public (and apparently limited) commitment of Heinz to something called the Center for Sustainable Shale Development (CSSD). It says the CSSD is “an unprecedented collaboration built on constructive engagement among environmental organizations, philanthropic foundations and energy companies from across the Appalachian Basin.” Teresa Heinz Kerry has since fired the people who launched this initiative. It was put together in cooperation with the William Penn Foundation, PennFuture and several oil and gas companies, including Shell, but Teresa has now, obviously, pulled back and funded this latest report, which is a direct attack on Shell.

Yes, the report, which may be found at the Heinz web site, isn’t about fracking at all, as the Rockefeller Racket’s Catskill Landkeeper Division slyly suggests, but, rather, about hazardous air pollutants in the Pittsburgh area and the Shell cracker. Indeed, the word fracking never appears and hydraulic fracturing but twice; both times in conjunction with what is the real purpose of the report, raising alarms about Shell’s proposed cracker plant in Western Pennsylvania. 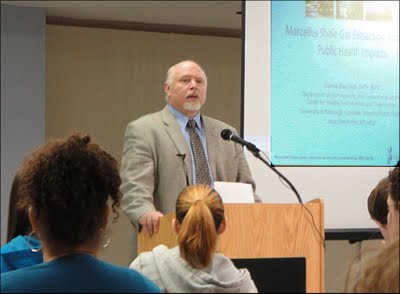 Conrad Volz – Inspiration for the CHEC and Heinz Attack on Shell

The words “natural gas” appear a few more times but, again, only in connection with the proposed cracker plant. There is absolutely nothing in the report to suggest natural gas development, drilling or fracking have contributed in any way to Pittsburgh’s air quality or health issues. This illustrates what a demagogic piece of nonsense the Catskill Landkeeper solicitation really is.

What the report does say is this (emphasis added):

In recent years, there has been an unprecedented expansion of unconventional natural gas development in Western Pennsylvania, Ohio, and West Virginia driven in part by the recent feasibility of hydraulic fracturing, which is part of a drilling procedure that allows for the tapping of the vast methane deposits contained in the Marcellus and Utica shales. To support the refining of wet gas condensates, Shell Chemicals plans to build an ethane “cracker” facility in Monaca, Pa. (Beaver County), which would replace the aging Horsehead, Inc., zinc smelter. It would appear that the replacement of the existing zinc smelter with the proposed ethane cracker has the potential to significantly transform the current pollutant mixture in the region. Such a plant would likely become the largest single emitter of volatile organic compounds (VOCs) in the PRETA region and could potentially increase ozone production in an urban VOC-limiting regime. Elimination of lead and other heavy metal emissions from the zinc smelter would clearly be beneficial and lower the risk of toxicity from these agents. In addition, it does not appear that the proposed ethane cracker alone would increase any of the National Ambient Air Quality Standards (NAAQS) criteria air pollutants, with the possible exception of ozone. On the other hand, the rather large releases of several known cancer drivers, such as formaldehyde and acetaldehyde, from the proposed cracker could increase cancer risk in the immediate proximity. In addition, the large influx of VOCs and fugitive emissions from these operations warrants further predictive analysis, especially with regard to current pollution mitigating strategies that may not be anticipating a transforming pollutant mix.

Get it? The cracker plant would replace a known pollution generator and is expected to meet air quality standards but, because there’s always a possibility it could exceed them, there should be more analysis.  That’s the indictment? It certainly doesn’t amount to much but, like all these junk science studies aimed directly, or in this case indirectly, at fracking, it plants a seed of doubt. That doubt is then exploited by unscrupulous anti-fracking hucksters such as the Catskill Landkeeper (whose e-mail is chock-full of lies and misrepresentations).

It also depicts, with great clarity, the two-faced nature of the Heinz Endowments. Heinz has lured Shell into a venture that appears to be going nowhere if Teresa Heinz Kerry has her way. Simultaneously, it has funded a pitiful attack on Shell’s cracker plant that is sure to also be used against Shell in the gas fields, if the Catskill Landkeeper and like-minded folks have anything to say about it. It’s not just junk science, but political junk science and the worst sort of all.