Fracking opponents continually try advancing their case with a combination of junk science and scare tactics but dig just below the surface and it all becomes quickly obvious.

The Catskill Mountainkeeper, which serves as the paid lap dog for the Park Foundation and the Rockefeller family is out with another scare-mongering letter to its supporters. The letter requests their appearance at another Albany rally and, as always, requests more money, as if access to several hundred million dollars of special interest foundation money wasn’t adequate. It also promotes two pieces of junk science on the matter of health in an attempt to suggest fracking is somehow polluting the groundwater, when there isn’t the remotest evidence it has or ever will.

The Fracking Opposition and Its Cartel 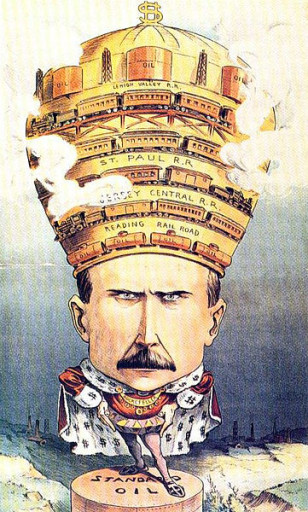 How the Rockefeller Cartel Operated Then and Now

The Mountainkeeper, readers will recall, is an offshoot of the Open Space Institute (OSI) previously headed by New York State Department of Environmental Conservation (DEC) Commissioner Joe Martens, last seen several months ago fishing at some undisclosed location. OSI, in turn, is closely connected with the Natural Resources Defense Council (NRDC). These organizations operate in the fashion of an old-fashioned cartel with overlapping memberships, which is hardly a surprise given the impetus for all of them came from the Rockefeller family, which built its fortune on such tactics.

The agenda of this Rockefeller Racket is to protect its own land interests along with its ability to acquire more Catskill land on the cheap. The Catskill Mountainkeeper is all about them keeping the mountain for themselves and they’re willing to stoop to any tactics to do so, including the funding and dissemination of junk science that puts an environmental cloth over what is nothing more than a naked land grab. The group should, in fact, be called the Catskill Landkeeper. They are assisted in this endeavor by the Park Foundation, the Ithaca-based group of similar minded snobs and, together, with a little help from the Heinz Endowments (think Teresa Heinz Kerry), they finance nearly every aspect of the campaign against fracking.

The two recent studies to which the Rockefeller Racket’s Catskill Landkeeper division refers are prime examples.  Here’s how they describe one of the junk science reports:

A new University of Missouri study, “Estrogen and Androgen Receptor Activities of Hydraulic Fracturing Chemicals and Surface and Ground Water in a Drilling-Dense Region” confirmed evidence that Catskill Mountainkeeper has been communicating for years – that chemicals commonly used in fracking for oil and natural gas are endocrine disruptors which have been linked by other research to cancer, birth defects and infertility.

Interestingly, they only provide a link to a fawning story about the study, not the study itself and the fawning story includes but a link to the abstract because the full report must be purchased. A much more objective and detailed summary was available here, though, and my colleagues over at Energy In Depth (EID), provide a superb analysis of it here. They have already updated their post on the subject twice as the evidence of the study’s junk science nature has mounted. Here’s the latest, which tells us what we need to know about it:

The Clinical Advisor posted an article evaluating the endocrine study, and its conclusion is quite telling.  From the last paragraph of the article:

Study limitations included a lack of direct identification of fracking chemicals in the tested water, the researchers acknowledged. They called for more comprehensive sampling of drilling sites in Garfield County to determine whether natural gas drilling is contributing to elevated EDC activity in ground and surface water.

As we said in our original blog post…the researchers pushed this story far and wide to get headlines that would link hydraulic fracturing to hormone disruption, when in reality they had no way of making that link.

This study, in other words, though peer-reviewed (which means almost nothing these days) was a publicity gimmick.  The lead author, as EID points out, is a fracking opponent–an advocate, not the objective researcher one would hope to have in charge.

Most importantly, it was funded by the Passport Foundation, which was created to help spend the profits from Passport Capital, LLC, a hedge fund that made a fortune off the sub-prime lending collapse of 2008 by selling short and is now making money by investing in energy companies “with the potential to experience extreme pricing power.” The Foundation is run by Janet Maughan, a philanthropy consultant who spent nearly eight years running the Rockefeller Foundation, where she presumably still has good connections, as Passport gave over $265,000 in 2011 to the family’s creation and favorite cause, the NRDC. It also gave generously to other fracking opponents, including Earthjustice and the Environmental Working Group.

Tomorrow, we’ll examine the other study and some more of what the Rockefeller Racket had to offer through its Catskill Landkeeper subsidiary.

3 thoughts on “More Fracking Junk Science on Health – Part I”