Fracking almost never gets a fair shake in the media but the reasons are sometimes not so obvious and involve things like weddings and softball.

Is there any integrity left in journalism?  One has to wonder.  A recent article published on the Capitol New York blog out of Albany suggests there’s damned little. Headlined “Fracking industry out-lobbies opponents, still loses ground,” the story was about as misleading as could be. I’ll get to that in a moment, but it’s not the basis of my query. The problem isn’t poor reporting, or even biased reporting, but a blatant conflict of interest.

A Fracking Wedding That Gets No Mention

The author of the post is Scott Waldman, who includes this adoring passage about Katherine Nadeau of Environmental Advocates of New York, a radical fractivist group:

But anti-fracking environmentalists say it’s different here, and that their organizing and publicity efforts—aided by celebrities and “Gasland“—have changed the equation in a way that makes spending less relevant.

“This industry was able to buy their way into every other state in the nation before anybody figured out what was going on,” said Katherine Nadeau, policy director at Environmental Advocates, a prominent lobbying firm. “Because of the people of New York, we turned the model on its head.”

There’s nothing wrong with quoting both sides of the debate, of course, but when one of the parties is presented as a conquering heroine prevailing against horrendous odds, suspicious minds want to know why.  Perhaps, just perhaps, it’s because Waldman’s boss, Capitol New York Albany Bureau Chief Jimmy Vielkind, is married to Katherine Nadeau.  Vielkind apparently brought Waldman with him from the Albany Times Union, where both of them previously worked, and Nadeau was also routinely quoted in a favorable light.

The Society of Professional Journalists Code of Ethics says this about that sort of thing (emphasis added):

— Avoid conflicts of interest, real or perceived.
— Remain free of associations and activities that may compromise integrity or damage credibility.
— Refuse gifts, favors, fees, free travel and special treatment, and shun secondary employment, political involvement, public office and service in community organizations if they compromise journalistic integrity.
— Disclose unavoidable conflicts.
— Be vigilant and courageous about holding those with power accountable.
— Deny favored treatment to advertisers and special interests and resist their pressure to influence news coverage.
— Be wary of sources offering information for favors or money; avoid bidding for news.

Journalists are accountable to their readers, listeners, viewers and each other. Journalists should:

— Clarify and explain news coverage and invite dialogue with the public over journalistic conduct.
— Encourage the public to voice grievances against the news media.
— Admit mistakes and correct them promptly.
— Expose unethical practices of journalists and the news media.
— Abide by the same high standards to which they hold others.

I expect most readers will agree that quoting your boss’s wife in a favorable light without disclosing the relationship would seem to violate these standards, especially when one considers there are any number of other individuals who could have been chosen to quote.  If Nadeau was the best source, so be it, but a disclosure surely certainly would have been appropriate. One can only imagine how any one of these three individuals, Waldman, Veilkind or Nadeau, might have reacted if the shoe had been on the other foot.

Yet, none of them seem to think there’s anything the slightest bit wrong.  Here, in fact, is a photo of the Times Union and Legislative Correspondents Association softball team earlier this year before Waldman and Veilkind left to join the Capital New York blog. That appears to be Katherine Nadeau front and center.  Several other reporters who frequently quote her are also in the picture. 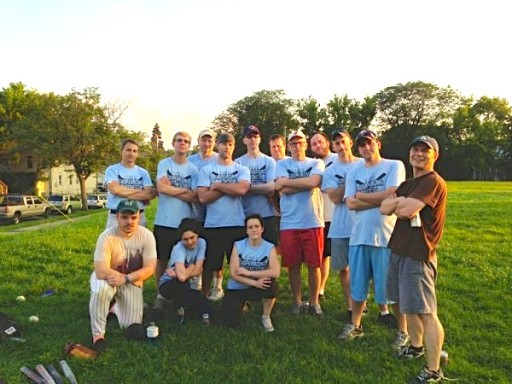 Quoting a member of your own team to say how well she’s done in beating those fracking supporters is a conflict of interest that should, at a minimum, have been disclosed, but it wasn’t. That’s a sad reflection on the quality of journalism today, the practitioners of which seem to think the high standards they set for others have no place in their own world.

Some of this might be forgiven if the article was at least balanced and accurate, but it was anything but. Environmental Advocates of New York is an affiliate of the National Wildlife Federation and readers will recall it is represented on the Governor’s Hydrofracking Advisory Committee that hasn’t met in many months.  The charge to the committee was to help develop appropriate regulations and here we have a participant group bragging about chasing gas companies out of New York and there is no mention of the relationship?

Where the Fracking Money Comes From

Waldman says Environmental Advocates of New York only spent $29,277 on lobbying in the first half of the year, as compared to over $500,000 spent by the gas industry on lobbying and educational outreach but conveniently leaves out all the “educational outreach” by the former.  It is one of the great scams, of course, that 501(c)(3) organizations like Environmental Advocates get away with describing most of their huge amounts of political activity as charity rather than lobbying, a luxury gas companies don’t have. Waldman perpetuates this falsehood.

He also says “A recent Siena College poll showed a growing number of New Yorkers want fracking banned here” using a story from September of this year but ignores a poll by the same organization a few weeks later, but well before his article was written, showing things going in the other direction.

One might have also expected Waldman to ask what Nadeau meant when she said her group “had turned that model on its head,” referring to gas companies supposedly “buy[ing] their way into every other state in the nation before anybody figured out what was going on.” One can only presume she meant Environmental Advocates was using that strategy in New York, given the record of her organization in collecting big money from super-rich Leviathon foundations to pursue their agendas.  It was a curious comment and deserved a follow-up question but, of course, Waldman simply opted to accept and publish the heroine up against it narrative.

That’s how journalism is done today in New York and it’s far from pretty. Waldman, Veilkind and Nadeau are all part of the same Albany gentry class who see things the same way, articulate a common view and even play ball together on the same team. It’s far removed from the way journalists like to portray themselves, as willing to offend anyone to get to the truth on behalf of ordinary readers. They are, in fact, far removed from ordinary society and doing the work of mega-wealthy elitists who are trying to steal New York out from under the feet of those ordinary folks in the Southern Tier who need this development to survive and pay taxes to Albany.

3 thoughts on “Fracking Journalism Leaves a Lot to be Desired”