Edward Allees; father, husband, businessman, community advocate and guest blogger here, died with his boots on last night. I was pleased to call him friend.

The word went out late last night as his wife Inge Grafe-Kieklak told us her beloved husband Ed had passed away. He had gone out outside to work with a spade and that’s where she found him later, the spade at his side. He was well into his ninth decade and still doing things – lots of things. Indeed, I saw him at a gas advocacy meeting Tuesday night. He greeted me with a firm handshake and a big smile as was always the the case with Ed. He had a bout with cancer not too long ago, but came back strong. He was out and about making his contribution to the cause right up to the end; a man of honor. 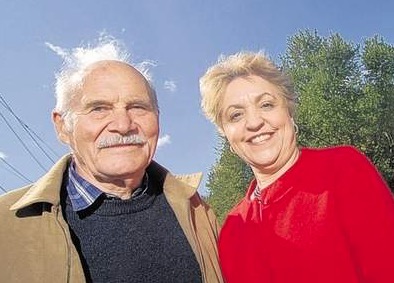 Edward Allees and Inge Grafe-Kieklak, from Middletown Times-Herald-Record article of three years ago

We all admired Edward Allees. He was a friend, a father, a husband, a successful businessman and a hard worker who, late in life, had successfully taken on the task of renovating a beautiful old house many of us would have torn down had we seen it in its original condition. It was his special attitude that made him beloved by all, though. There was always that perpetual smile. He was as close to being the Happy Warrior as any man I’ve ever known personally. He was also very well read, with a large library, and a gracious wit and kind heart to accompany his views.

Edward Allees was also a guest blogger here and what he wrote a little over a year ago for us remains highly relevant today. It was a short post, packed with punch, and we repeat it below in honor of our friend:

Environmentalism: How Much Is Too Much?

When concern over a supposed threat to a species, in this case the Spotted Owl, results in the loss of thousands of timber related jobs in the Northwest. The threat is later proved to be false.

When an ever growing movement by federal and state governments closes thousands of acres to the public, fueled by pressure from ideological activists, who, God forbid, their own backyard be taken.

When calls for the elimination of fossil fuels in the generation of power in favor of wind and solar, ignoring the fact these two sources of power require the backup of fossil fueled generation, an arrangement driving up the cost to all consumers with massive duplication of infrastructure.

When the headlong rush to solar, always requiring public subsidies and/or tax abatements, result in failures such as the Ivanpah Solar Power facility in the Mojave Desert in California.

When crony capitalism results in the “Buffalo Billions” of SolarCity made easier by environmentalist fervor for “sustainable” fuels.

When a senator states that “It’s clear that clean energy investment will not only save thousands of lives and save billions of dollars in health care costs, but will also create almost 300,000 jobs every year.” Never mind that a measure creating 300,000 jobs would cause the elimination of 500,000 jobs in fossil fuel related industries.

When wind farms, touted by environmentalists, have to be shut down in places like England, Oregon and New Brunswick, Canada because of energy surplus.

When the environmentalist push for wind power has resulted, not with big benefit to U.S. manufacturers, but instead to a huge benefit to Chinese and other foreign manufacturers.

When all over Europe, in Spain, Germany and Italy, to name a few, the push for renewable energy, especially wind, has resulted in huge government subsidies, high energy costs to consumers and thousands of lost jobs. These countries are now experiencing the consequences of their rush to “sustainable”.

When fracking for natural gas is prohibited, as it is in New York, due to pressure from wealthy individuals and cash-flush foundations. If New York were to allow fracking, and it sits on vast fields of gas, the state would see new jobs, a surge in economic activity and an increase in tax revenue.

When the creation of large wind farms requires vast areas, barren and lost to any other use, incidentally killing thousands of birds each year. Also of note, the manufacture of wind and solar components requires huge amounts of fossil fuel.

All of this is not to say that concern for the environment is bad. On the contrary, we must have regard for our environment. It is the “ism” in environmentalism that is bad. It is ideological extremism ignorant of its consequences.

Posing his question as he did, answering it with examples and concluding with a bit of philosophical wisdom about the “ism” of environmentalism, was not only a great way to make the point, but also characteristic of Ed. He was quiet most of the time,  but interjected a combination of quick insights and wisdom whenever it could help. He was mature enough to realize less is often more, but never far from the cause. He was always true. These are the marks of honor. Like so many others who had the pleasure to know him, I was proud to call Edward Allees my friend. Rest in peace, Ed.