It’s been well known for years fracking opponents are the wealthiest of the wealthiest. Their spending dwarfs that of pro-gas forces but a new campaign by Josh Fox and MoveOn.org admits the obvious by offering to pay fracking fighters.

Several friends sent me an appeal recently from MoveOn.org for individuals who would volunteer as Fracking Fighters.  It’s a fascinating letter from Josh Fox, the phony film maker who has built a career around one $100,000 lie and after making some reckless statements typical of his approach to any topic, he begs for people to step forward and join the brigade against fracking, using a $500 sweetener to attract attention.  If there is any clearer indication the fracking opposition is in trouble, I don’t know what it might be.  Paying for volunteers is the last resort.  They’ve been doing it all along, of course, but this is blatant and a tacit admission their claim about the industry flooding the battleground with money was really just another case of accusing your opponent of doing what you’re doing.

I’m Josh Fox, director of the films Gasland and Gasland 2.

In 2008 my family’s home and my neighbors’ homes came under siege by the gas industry, which was buying up leases left and right to start fracking all over the Delaware River Basin. I’ve experienced first hand the devastation that fracking brings.

My two documentaries, Gasland and later Gasland 2, became award-winning films precisely because they called out the fracking industry for its lies and put a face on the millions of Americans at risk—along with our environment and global community—because of the largest domestic fracking campaign in history.

Traveling all across the U.S., I witnessed the destruction that drilling and fracking brings to communities, to public health, and to the environment. Water so contaminated it lights on fire, air so polluted it causes multiple health problems, and communities overrun by this destructive industry.

And along the way, I’ve seen that our only way out is to organize—to rally together, to petition our elected officials, to get out into the streets.

That’s why I’m very excited about MoveOn’s new initiative to support the fracking movement at its heart, and why I hope you’ll apply to be one of 50 MoveOn #FrackingFighters.

Click here to learn more and apply to become a MoveOn #Fracking Fighter.

Applications are due this Tuesday, December 3, at 10 p.m. local time—so don’t wait any longer to apply.

You can also help by forwarding this email to friends or family who might be affected by fracking. Or click here to share this opportunity with folks in your network on Facebook. Nearly every state is touched by some part of the fracking process, and the climate change caused by the fossil fuel industry truly affects us all.

If you’re selected as a FrackingFighter, you’ll receive a $500 grant to use for your campaign, a toolkit of materials like banners and clipboards, and training from experienced organizers. And you’ll join a network of grassroots leaders fighting fracking across the country—from the oil fields in California and Texas, to the gas fields in Pennsylvania and Colorado, from the Midwestern dunes being mined for the silica sand used in fracking, to the New Jersey and North Carolina neighborhoods threatened by pipelines and export terminals that would transport fracked gas.

I had the pleasure of working with MoveOn members to screen Gasland 2 at movie parties coast to coast earlier this year—and I’ve since met MoveOn members across the country who are educating their neighbors, lobbying their elected leaders, and earning media coverage to put an end to fracking.

In my town, after years of meetings, letters, and phone calls, we won. This summer, the two biggest gas companies fracking in Wayne County, Pennsylvania, announced they were canceling all leases and backing out of fracking in our county.

It’s only the start of what our movement can make possible. We need more victories like that across the country—and you can be part of it by applying to be a MoveOn #FrackingFighter before the deadline at 10 p.m. this Tuesday, December 3.

Josh Fox says he came under siege from the gas industry in 2008.  This isn’t the story he told an Aspen NPR station when he claimed, falsely, he was a member of the Northern Wayne Property Owners Association (NWPOA) that was negotiating with gas companies to obtain leases.  The lease he showed in Gasland, in fact, was a draft one prepared by NWPOA, not a gas company, and it wasn’t prepared until a year later.  His entire story about a $100,000 offer from a gas company was a fabrication and he has dissembled about it ever since.

Fox also says he has experienced first-hand the devastation fracking brings, leading one to believe fracking has taken place on or near his property (really his father’s). That’s not the case. The nearest fracking to Josh Fox is roughly 30-35 miles away, if not more.  A test well was drilled near the 19+ acres the Fox family owns in Milanville, Pennsylvania, but it was never hydraulic fractured.  Moreover, the site looked like this before reclamation.  Devastation?  I don’t think so.  You’d have to know where it is to find it. 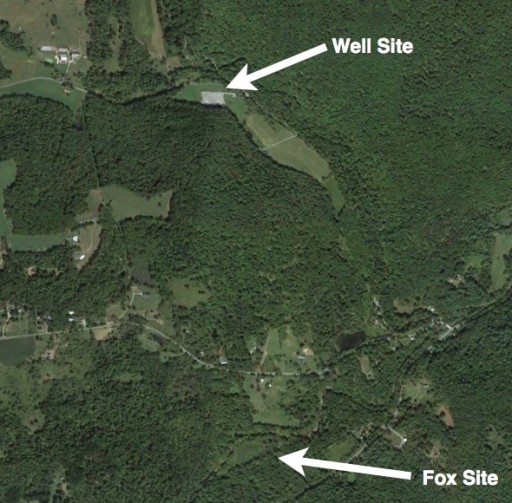 “Water so contaminated it lights on fire…” How many times does this lie have to be rebutted? Apparently, thousands of time. Phelim McAleer did it best when he forced Fox to give us that wonderful “deer in the headlights look” after being confronted with the truth and, of course, Fox now refuses to debate Phelim.

“Air so polluted it causes multiple health problems…” No, the air in New York City where Fox really lives has been measurably improved by what fracking has wrought, a plentiful and inexpensive source of energy that is delivering cleaner air to New Yorkers like him.  He uses natural gas by the way to heat his own headquarters, of course, just like Alec Baldwin, Susan Steingraber, Tony Ingraffee and the Park Foundation family that helps fund all the fracking opposition.

“Communities overrun by this destructive industry…” No, communities such as Dimock have welcomed natural gas development, turning out 6,000 to 8,000 visitors to the Cabot Oil & Gas picnic compared to a handful of protestants.

Fox also wants to stop pipelines to New Jersey where consumers have saved thousands of dollars on their heating bills from the piped gas produced by fracking, not to mention gaining cleaner air there as well.

Finally, Fox says he chased the gas companies out of Wayne County.  Well, he may have played a role, but the real villain is the DRBC, which as been boughten off by big money from the William Penn Foundation, which also funds the Delaware Riverkeeper, of course, demonstrating how completely big money corrupts.  The Riverkeeper and William Penn Foundation are both tied to the Rockefeller family through grants and relationships with the Open Space Institute.

Big money is behind all the fracking opposition, in fact, as we have demonstrated numerous times, and its usually the same people wearing different hats.  You know their names.  The Park Foundation has been funding Josh Fox.  The Rockefellers use their various foundations, Including the Sustainable Markets Foundation, to fund my friend Walter Hang’s work and the Heinz Endowments funds everything opposed to fracking.  Are any of them behind this effort? We don’t know, but we do know its another big organization with the wealthiest of connections now actually offering to pay people $500 to run their little hate campaigns. That tells me they know they can’t win without such a tactic.  Their campaigns aren’t grass roots but astroturf.

12 thoughts on “Fracking Fighters Are An Admission of Defeat: Who’s Funding Them?”