A new video entitled “The Ethics of Fracking” is an exercise in double standards demonstrating the hollowness and, ultimately, the hopelessness of the anti-fracking cause.

Is it ethical to take someone’s property or deprive another of his or her livelihood based on falsehoods told for the purpose of advancing an ideology?

That’s the question that ought to asked of the participants in a video just released by a group called the Gas Drilling Awareness Coalition (GDAC). “The Ethics of Fracking” is a video bundle of such falsehoods, combined with inflammatory statements and baseless speculation by a small collection of activists, including trial lawyer, and now Congressman, Matthew Cartwright. It’s little more than a regurgitation of anti-fracking talking points long ago proven to be meritless.

There is so much of this in the video, in fact, I simply suggest readers check out our Hydraulic Fracturing page for the facts. The rebuttals are everywhere and there’s little point in rehashing them in this instance, for GDAC has offered nothing new.  Rather, it has only repackaged old disproven accusations, using an ethics theme to suggest intellectual seriousness. What has resulted is anything but intellectual or serious. It is merely a sad reflection, in fact, on the loss of ethics in so much of the environmental movement, which now adheres to no more than an “ends justifies the means” philosophy.

GDAC: Transparency for Thee, Not Me

The evidence of this loss of ethics is evident in several places in the video. Let’s start with some words from Rabbi Mordechai Liebling from the Reconstructionist Rabbinical College, who says the following at 7:29 in the video:

“Well, there are several categories to think about whether fracking is ethical or not. One category is transparency and if something is not open and transparent then we begin to have ethical questions. The fracking industry, for example, has done everything it can to hide what the contents of the fracking fluid is (sic). So, using this poisonous fluid and and not revealing to the public what exactly is in their; that’s not ethical practice.”

Perhaps, Rabbi Mordechai is unaware of FracFocus.org and state disclosure requirements, so let’s give him the benefit of the doubt on that falsehood. One can not do so for GDAC, however, which produced the segment. Why, because GDAC is anything but transparent. It identifies itself as follows:

The Gas Drilling Awareness Coalition, Inc. of Luzerne County, based in Dallas, PA, is a non-profit community educational association, whose members are concerned with the negative effects of the Industrial Process of Drilling for Natural Gas in PA.

The indication GDAC is a “non-profit community educational association” immediately suggests it might be a charitable organization. A visit to the Charities Online Database at the Pennsylvania Department of State website, though, indicates no such charitable entity. Searches by name and zip code reveal nothing.  Ditto for Guidestar, where one can find background information on almost all non-profit charitable groups. Moreover, the donations page on the GDAC website is simply a PayPal link with “gdac.martin@gmail.com” at the top. Where is the transparency here? Who, exactly, is GDAC and who funds it? Who paid for that video?

GDAC was registered as a Pennsylvania corporation on September 27, 2010 but, apparently, is not recognized as a tax-exempt entity (a charity) and, if so, donations to it are not tax deductible. GDAC, to be fair, never says donations to it are tax deductible, but is this transparency? Is it ethical to collect donations on the premise you’re a non-profit educational association without telling your funders their donations aren’t tax deductible, assuming that’s the case? One wonders how many of those donations were deducted by unsuspecting donors? Is that ethical?

Rabbi Mordechai also, at 2:43 in the video, talks about methane “gas escaping into the atmosphere,” accompanied by this FLIR image of what is supposedly a methane plume. 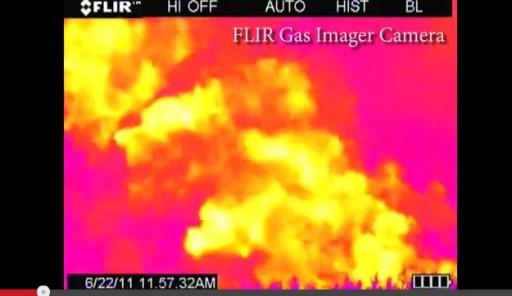 The FLIR camera images, however, can be very misleading, as this article and video, demonstrate from another example where a FLIR camera was purported to have depicted methane leakages. Is it ethical to accompany your claim of escaping methane with videography that has in other cases been demonstrated to show no such thing?

[UPDATE: Note comment below from Frank Finan who says he has a later version of the camera (a GasFindIR HSX Camera) which does show more than heat and is able to detect methane. We intend to further investigate this, but the reader needs to know what the camera owner says in the meantime.]

[UPDATE II: A little checking reveals the Chesapeake Bay Foundation video debunked by Energy In Depth was ALSO taken using a GasFindIR HSX Camera, so while it may well be useful in documenting gas leaks and is, in fact used by the industry itself for that purpose, it requires an expert reading of the results to know if its simply heat or something else based on the characteristics of the plume. We can’t, therefore, say with certainty what this video depicts or doesn’t depict.] 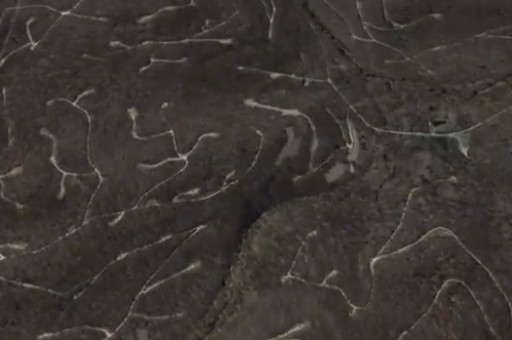 The purpose of the photo, one imagines, is to demonstrate the supposed devastation associated with modern day horizontal drilling and hydraulic fracturing, but it actually demonstrates the opposite. This area is easily locatable on Google Earth and here’s a shot from that service, including the typical distance between wells (yellow line), which is less than 1,000 feet. 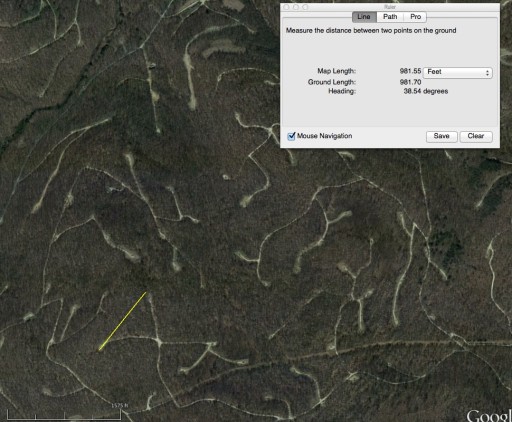 That short distance is the first tip-off this isn’t modern day Marcellus Shale drilling. Today, units of one to two square miles are typical, with single well-pads accommodating 8-10 wells that each have laterals of as much as a mile or more in length, greatly reducing the land disturbance. This picture depicts 5-6 dozen well pads with perhaps one acre of total disturbance each (60-70 acres total) in an area of perhaps one square mile, whereas Marcellus Shale drilling today, using horizontal drilling combined with hydraulic fracturing (officially, albeit erroneously, tagged, as “unconventional” natural gas development) would probably only disturb a total of 5-8 acres, with most of that reclaimed at the end.

We also know those aren’t unconventional wells because there are only 21 of those in all of Forest County, according to DEP records, and there are a lot more than 21 in this photo. These are conventional wells and there are almost 3,500 of them in Forest County. They were drilled at a density of as much as one well per 10 acres and there was a well pad for each. And, there was none of the horizontal drilling hydraulic fracturing combo activity about which the GDAC rails. So what was the point in displaying that image? It was, obviously, more scaremongering. Is that ethical? Do anti-fracking ethics permit one to use false images?

That isn’t the only instance, either. There is, too, an image from Franklin Forks of the Manning well, which has been proven to be a mechanical issue unconnected with natural gas development and representative of what can happen when your water well is flooded and no one bothers to repair it. There is also footage of Tony Ingraffea at 8:55 showing what he says is methane leaking from a gas wellhead that is flooded with water. Tony goes on to cite his usual litany about high methane leakage rates. That’s interesting because Ingraffea developed his figures using, among other things, old off-shore drilling data of little or no relevance to shale gas production. Is it ethical for fracking opponents to use irrelevant data to make their case? Clearly, it is not, but there it is in the GDAC video as their supposed evidence fracking is somehow unethical.

Then, there is trial lawyer/Congressman Matt Cartwright at 15:02 saying “We don’t know if we can clean up an aquifer that has been fouled by fracking wastewater” as if it had ever happened (it has not) or there was no need to first prove it could happen. That is the essence of the precautionary principle, which is the common thread running through the video. Described as “holistic,” it may be summed up as “if I’m scared, you can’t do it.” It is anything but holistic as it assigns all the costs to one side of the argument. Aaron Wildavsky described it as follows:

The precautionary principle is a marvelous piece of rhetoric. It places the speaker on the side of the citizen—I am acting for your health—and portrays the opponents of the contemplated ban or regulation as indifferent or hostile to the public’s health. The rhetoric works in part because it assumes what actually should be proved, namely that the health effects of the regulation will be superior to the alternative. This comparison is made possible in the only possible way—by assuming that there are no health detriments from the proposed regulation.

Oh, and Cartwright’s former law firm, where his wife still works, solicits fracking lawsuits. Is it ethical for a Congressman to appear in a video that indirectly doubles as a piece of advocacy for his wife’s trial lawyer business?

So it is with GDAC’s definition of ethical behavior, which, it turns out, like its data, is ultra selective in its application and adapted to making a case that fits their ideology. They seek to impose that ideology on others, which brings us back to the beginning. Is it ethical to take someone’s property or deprive another of his or her livelihood based on falsehoods told for the purpose of advancing an ideology? The answer is NO.