Josh Fox told some very tall tales the other night on the Jon Stewart Show.  It was a disgusting display of duplicity matched only by the fawning attitude of the guest host, John Oliver.

This past Wednesday, June 26th, one of my personal favorite shows, The Daily Show with Jon Stewart welcomed Josh Fox to the show for an interview. I have come to depend on the show to tell it like it is, point out the irony in every situation, and and hold people accountable for their words and deeds. Unfortunately, the show failed to deliver in a big way. Rather than a real interview, the host, John Oliver (filling in for Jon Stewart for the summer) allowed Josh Fox to partake in his very own soapbox speech filled with extreme exaggerations and blatant lies. 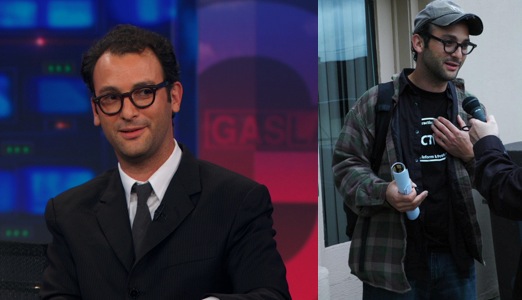 Josh Fox looked much more at home in his fancy, well kept suit than he does in the flannel shirt and obviously brand new work boots that he chooses to wear to functions here in rural Pennsylvania.

The interview started with John Oliver bringing up the flammable water that Fox has trademarked as proof of the negative effects of hydraulic fracturing for natural gas. When I learned that Josh Fox was to appear on the show, I tweeted to the show urging them to ask Josh Fox about this clip that shows Josh Fox admitting that people could light their water on fire due to methane in their wells long before fracking ever started (they must not have received it).

The rest of the interview followed this same line of irrational and unsupported claims. John Oliver seemed more like a 14-year-old girl who had mistaken Josh Fox as Justin Bieber than an investigative journalist known for telling it like it is. At one point John Oliver butted in with what I thought might be a mention of the evidence refuting Fox’s claims, but turned out to be a conversation about the “friendly frackasaurus that appears in Gasland Part 2.

Josh Fox begins his soapbox speech, “What we’re seeing all across America are people being able to light their water on fire in the face of this, the hugest domestic gas drilling campaign in history. Why hasn’t the government done anything about it? Why have our regulatory agencies failed to protect Americans?” This would have been an opportune time for John Oliver to point out that no evidence has been found to suggest that the American people need protecting.

Next, Fox stated, “The natural gas industry has come in and literally taken away the regulatory agencies from the people, has obstructed the science, has advised even the President of the United States to go on the side of more and more fracking.” I found this statement to contain more than a hint of irony, considering that Josh Fox and his followers successfully convinced the Delaware River Basin Commission to protect the interest of a few over that of the overwhelming majority, and continually make up their own facts and figures or cite, as scientists, those with no training or expertise.  It seems this statement would have been more accurate if “the natural gas industry” had been replaced with “Josh Fox and his followers.”

Fox continued to attack the natural gas industry when he compared their statement that natural gas burns cleaner than coal to the witches in Shakespeare’s Macbeth which he explained, “the witches say to Macbeth ‘oh, you’re going to be the king’ and they leave out the part about ‘oh, you’re going to have to kill all your friends, you’re wife’s going to commit suicide, you’ll be dead in three days’.”

According to Fox, the gas industry tells you that natural gas is cleaner burning than coal, but leaves out that “methane is 105 times more potent in the atmosphere than carbon dioxide” and “they are leaking huge clouds of methane off of these well sites.” Of course, these claims are misleading at best. A more accurate comparison to this story would be that critics of the gas industry like Fox leave out that they will provide high-paying jobs, offer a cleaner and cheaper alternative energy source to local homeowners, and revitalize run-down rural economies. If I were Macbeth, I would call that a win-win.

Later on in the interview, Josh Fox claimed that two-thirds of people in Pennsylvania support a moratorium across the state and that “it is now the official position of the Democratic party in Pennsylvania to support a moratorium on gas drilling.” What Josh Fox doesn’t understand is that you can’t judge support from newspaper articles and bumper stickers. He is a part of a vocal minority that has made a habit of exaggerating their support.

John Oliver was no better than Josh Fox, suggesting that calling natural gas a transitional fuel sounded like “the language of a drug addict.” But my next question is always the same: what do you propose instead? In my opinion, suggesting that as a nation we can skip natural gas and start relying only on renewable energy sounds like the language of an idealist with no concept of the limits of the technologies who likes to throw around solutions with no feasibility.

To close his wildly inaccurate soapbox speech, Fox starts to refer to the “PR campaigns” of the natural gas industry. Again, the irony seemed so thick you could cut it with a knife. Josh Fox’s entire “brand” is nothing but a PR campaign. It is made up of images and famous people and charged words, not facts or figures or science. One of the comments regarding the interview online said it all when it referred to Josh Fox as “an unabashed liar.” Another said, “I feel there is something rotten in Josh Fox.” I could not agree more, and think interviews like this one that allow him to pat himself on the back as a self-professed hero of the land are getting old.

Watch the full interview here and then watch this for another example of the Fox tales: