Fossil fuel opponents are losing it because Alex Epstein is making the moral case for those fossil fuels; hyper-sensitive alarmists can’t handle debate.

Emily Atkin, formerly at The New Republic, has a blog site, Heated, “a newsletter for people who are pissed off about the climate crisis.” How pleasant!

One of her posts caught my eye: a hit piece on Chevron and, indirectly, Alex Epstein, the author of The Moral Case for Fossil Fuels. 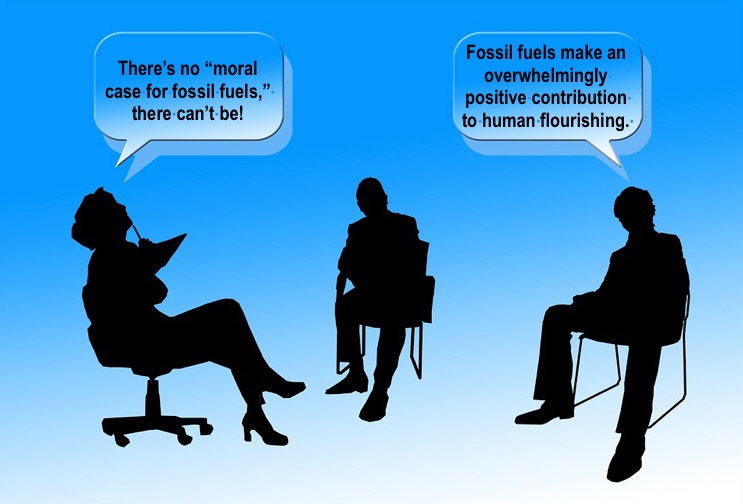 Earlier this week, a tipster sent me a picture of a pamphlet. They said it was given to them by a friend who works at Chevron. The Chevron employee was apparently given this pamphlet because employees are increasingly being confronted by friends, family, and strangers about the climate crisis. So, the tipster said, “Chevron made talking points for employees getting into arguments about climate change and fossil fuels.”

What’s wrong with that? Better yet, have a debate for employees during a sack lunch period. May the best ideas win!

… I was curious about the contents of the pamphlet—because as the tipster correctly noted, “the majority of it seems to be from ‘The Moral Case for Fossil Fuels,’” a controversial book by Alex Epstein that severely downplays the risks of climate change and promotes the use of fossil fuels as a force for humanitarianism and social justice.

The fact that Chevron is promoting ideas popularized by Epstein is significant, said Danielle Fugere, the president of As You Sow, a non-profit that works on corporate sustainability through shareholder action. “It signifies the immense pressure these companies are under due to climate change,” she said. “Fossil fuel companies have never had to justify their existence before. Now, they have to justify it not only to the world, but to their own employees.”

Epstein then comes in for criticism:

Epstein currently runs the Center for Industrial Progress, a “for-profit think tank” that provides, among other things, consulting services for energy companies. To advertise said services, Epstein warns fossil fuel companies that their industry is under attack “by so-called environmentalists that can put a halt to your projects and sabotage your bottom line.”

“The Moral Case for Fossil Fuels” is Epstein’s 2014 book. It falsely downplays the risks of climate change. Epstein doesn’t deny that global warming exists; rather, he regularly mischaracterizes the state of climate science, saying things like “fossil-fuel use has only a mild warming impact,” which is false. This softer, gentler form of climate denial is paired with arguments about the benefits fossil fuels have provided society in the past.

The benefits Epstein regularly speaks about are echoed in Chevron’s talking points. The pamphlet—which you can read in full on Chevron’s corporate responsibility document page—argues that “What we do is good” and “What we do is essential.” It says that protecting the planet is “dependent” on fossil fuel use; that fossil fuels lift people out of poverty; that 45 percent of the world’s population would go hungry if not for the use of natural gas-derived nitrogen-based fertilizers; and that Chevron contributes to economic growth by purchasing billions in goods and services.

Yes, Emily Atkin, and Epstein will debate you or any other person you designate on energy and climate policy. He just might brighten your day by demonstrating that the world is doing just fine, all things considered.

These talking points represent a stark departure from the increasingly anti-fossil fuel rhetoric coming from the scientific community. On Tuesday, for example, more than 10,000 scientists from across the world and from many disciplines released a report warning that the planet “clearly and unequivocally faces a climate emergency.”

To address this emergency, the world must “cut out fossil fuels in favor of renewable sources of energy, a trend it notes is not happening fast enough,” the Washington Post reported.

That’s one side of the argument. Bummed? How about considering the other side?

On the Center for Industrial Progress website, Epstein says one of his “major goals is to teach millions of employees in the fossil fuel industry to understand the value of what they do and how to communicate it.” This would line up with our tipster’s claim that Chevron’s pamphlet is for its employees.

And, with the 2nd edition of Epstein’s book due out this summer, be ready to debate and even change your mind.

But, Chevron did not respond to a request for comment on whether it was working with the Center for Industrial Progress on its messaging, or whether the material was for employees—and Epstein wouldn’t say whether he worked with the company or not.

“Our client relationships are confidential, so I won’t comment on our influence or non-influence on any particular company or content piece,” he told HEATED in an email. The Center for Industrial Progress does, however, work with “numerous organizations,” Epstein added.

“The Center for Industrial Progress works with numerous organizations that share our goal of promoting pro-human, pro-freedom positions. Our aim is to help them develop messaging that persuades stakeholders by providing the full context of fossil fuels’ impacts on human flourishing–both their negative and their positive impacts.

It is our commitment to looking at the full context that has persuaded us and allowed us to persuade others that fossil fuels make an overwhelmingly positive contribution to human flourishing, and that side effects such as the warming impact of CO2 do not justify the widely-proposed radical restrictions on fossil fuel use.”

Emily Akin then substitutes her science (from Carbon Brief, which “extracted data from around 70 peer-reviewed climate studies to show how global warming is projected to affect the world and its regions”):

All of these effects will result in an untold amount of human and animal deaths; ecosystem collapse; and global conflict.

“I think the company is trying to give its employees a reason to come to work every day,” Fugere said. “I’m sure it’s not easy to work at an oil and gas company when those companies are contributing potentially to the downfall of civilization. And I don’t say that flippantly, but with true meaning: They are contributing to a world that will be inhospitable to human and other life. So they very much have to convince employees that they’re doing something important.”

A confession of sorts follows:

Can the world do without dense, mineral energies? Replace oil and gas with wood, wind turbines, and solar panels? For the answer, check out other posts on energy density at MasterResource.