The Pennsylvania Senate Environmental Resources and Energy Committee held a hearing on the subject of Foreign Influence on natural gas development.

Yesterday, I was honored to be asked to testify at a hearing conducted by the Pennsylvania Senate Environmental Resources and Energy Committee on the subject of Foreign Influence on Natural Gas Development in Pennsylvania. Three of us testified, including Tom Murphy, the Director of the Penn State Marcellus Center for Outreach and Research, Kevin Mooney, reporter with the Daily Signal and me. Tom and Kevin both filled their excellent testimony with facts galore. You can see the video and read all our testimony here.  I have also embedded the video below along with my testimony, which begins at about 49:00. 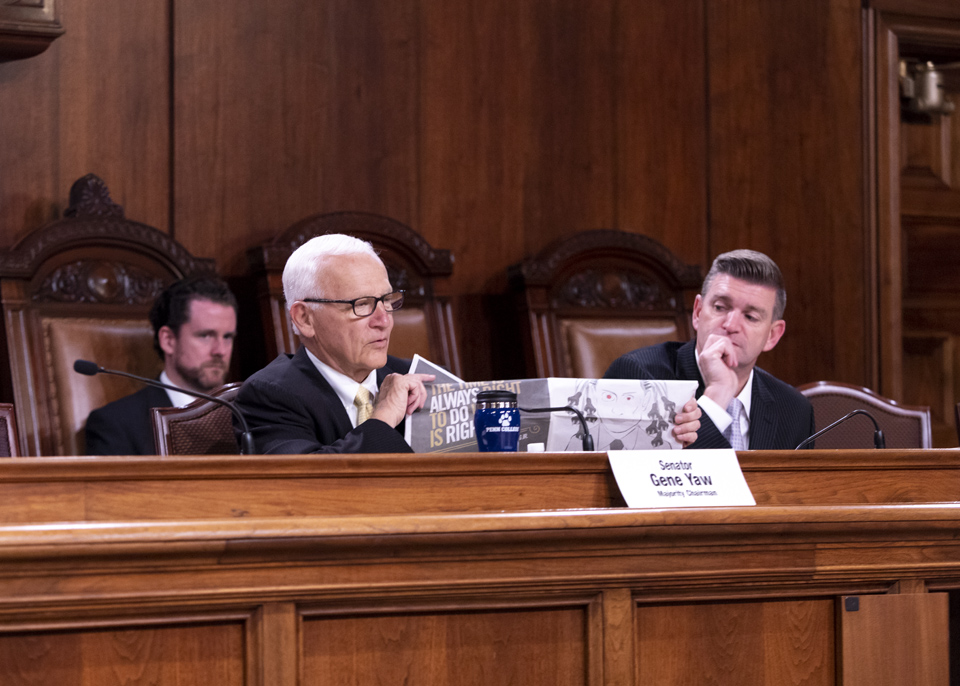 My name is Thomas J. Shepstone and I’m a planning and research consultant from Northeast Pennsylvania. I have over 40 years of experience working with communities throughout the Commonwealth. I also represent numerous private clients, including some in the natural gas industry and I publish a blog advocating for natural gas development in our region. Finally, I’m a landowner with a natural gas lease that has been in limbo for nearly a decade due to DRBC/SRBC double standards.

I’m here today to talk about what I’ve learned in researching the foreign influences on Pennsylvania’s energy sector. Those influences are exercised primarily, though not exclusively, through wealthy foundations set up as tax-exempt non-profit corporations. These supposed charitable groups are highly political, engaged in massive grass-roots lobbying as defined by the IRS and operate under the guise of being 501(c)(3) entities when they are anything but.

These entities are doing the dirty work of the wealthy families and very special interests who fund them—special interests with large investments in foreign oil and gas. They are focused on doing anything and everything they can to stifle Pennsylvania natural gas production that, thanks to Cove Point and other proposed LNG export facilities, threaten to compete with those foreign investments.

Who are these tax-exempt foundations? There are a handful  who fund the bulk of opposition to natural gas development. One of the most prominent is the Heinz Endowments, a creation of one of Pennsylvania’s most famous families.

The Heinz Endowments has funded one radical anti-gas initiative after another. It is behind the Southwest Pennsylvania Environmental Health Clinic, for example, which is a purely junk science outfit intended to generate anti-gas headlines. It has funded PennFuture, the Clean Air Council, the NRDC, the Delaware Riverkeeper and even the on-line journal StateImpactPA, which serves as an echo chamber for stories ginned up by the former.

We learned something about the Heinz family and one of the Heinz Endowments directors recently, though, that tells us there’s a lot more than altruism going on here. We learned  Chris  Heinz is heavily invested in Burisma, a Ukranian oil and gas company that brags it “operates the largest modern rig and hydraulic fracking fleet…in Ukraine and across the region.”

Burisma clearly hopes to supply Europe with natural gas as a competitor to Gazprom, the Russian natural gas company. Burisma will also be competing with LNG from the US; Pennsylvania LNG that initially comes out of the ground in Bradford, Lycoming and Washington Counties, is then converted to LNG and finally shipped out of Cove Point to import terminals all of the world.

Meanwhile, the Heinz Endowments, on which Chris Heinz sits as a director, just funded the Delaware Riverkeeper “to support communities seeking to limit the environmental and public health impacts of oil/gas development in Pennsylvania,” which means to fight any fracking whatsoever anywhere in Pennsylvania, including far outside the Delaware watershed.

Chris Heinz’s family foundation also just funded the Clean Air Council “to protect communities and environment from fossil fuel infrastructure impacts,” which means to fight any and all pipelines that might deliver natural gas to LNG export terminals.

So, what we have is the Heinz family spending money to thwart natural gas development in Pennsylvania on the basis of supposed environmental and health impacts even as it invests in that industry overseas. The Heinz Endowments, for all practical purposes, is acting as an agent of foreign influence, nurturing the development of Ukranian gas by delaying, frustrating and killing the potential for competition from Pennsylvania  gas.

Worse, it’s doing it as private tax-exempt foundation that’s not supposed to doing any lobbying whatsoever but is evading the rules through grants to shill organizations who are permitted to do modest amounts of grass-roots lobbying but blatantly ignore the rules.

The Riverkeeper gave BerlinRosen a contract for $125,000 in 2016 for “media.” Yet, it claims to have spent zero dollars that year on grass-roots lobbying. Heinz protects its family’s foreign investments by investing in the Riverkeeper’s campaign to frustrate Pennsylvania natural gas.

And, it’s not just Heinz or just foundations. The Rockefeller family, for example, employs several interconnected foundations to support the same or similar shill groups, as it has heavily invested in the development of a Chinese petrochemical terminal.

Steven Clark Rockefeller, Jr. (Nelson’s grandson and son of Steven, Sr. who has been Bill McKibben’s patron at Middlebury College) has created Rose Rock Capital, investing billions in something called China Rose Rock, through a joint venture with Hongfa Investment Group, which is constructing and managing the new terminal in Tianjin. It will import basic petrochemicals for now. The Rockefellers are clearly trying hard, though, to develop a Chinese petrochemical industry that will compete with the one Pennsylvania is creating. They have a special interest in slowing natural gas development here, as they invest there.

There’s also the NRDC, of course, and other Rockefeller funded attack dogs who’ve done everything they can to prevent Pennsylvania gas reaching or going through New York via pipelines. The NRDC, the Open Space Institute and the Catskill Mountainkeeper are all interconnected with the Rockefeller family and share directors.

The NRDC has also gone out its way to avoid offending China as Congress has noted. House Natural Resources Committee members say “NRDC’s relationship with China has many of the criteria identified by U.S. intelligence agencies and law enforcement as putting an entity at risk of being influenced or coerced by foreign interests.”

Moreover, Rockefeller Capital Management, 10% of which is owned by Rockefeller family trust, was recently launched with $18.5 billion in assets and is focused on China like a laser beam. Its Chief Investment Strategist, Jimmy C. Chang, in fact, has authored an article for the investment group’s website. It’s entitled “The Silk Road: China’s Inevitable Ascendancy; An Alternative Vision to Western Liberalism.” This shouts foreign influence and, the NRDC being an integral part of the Rockefeller network, its “China can do no wrong” attitude is no coincidence.

It’s also no accident this same NRDC and its Catskill Mountainkeeper affiliate have been in the thick of opposing the Constitution, Northern Access and the Atlantic Sunrise pipelines. The Atlantic Sunrise, it complained, would “deliver gas to the Cove Point LNG export terminal in Maryland.” Of course, that doesn’t fit the template the NRDC and its Rockefeller masters have in mind; one where China is ascendant.

The Russians are also influencing our energy policy, of course. The Sea Change Foundation, which is believed to have served as a money launderer for the Russian money that ultimately went to the Energy Foundation, the NRDC and the Sierra Club, among other anti-gas extremist groups.

The Russians, too, do a lot of social media under various guises to support anti-gas initiatives. They use their Russia Today media outlet to provide talking points and retweet opportunities for the likes of various anti-gas radicals in Pennsylvania and New York.

And, the Russians have representatives in this country, including the Ketchum public relations firm, which does things here to promote Gazprom, the Russian Federation’s gas company and its interests. Much of it is innocuous but, in a 2013 report to the Department of Justice about Ketchum’s activities on behalf of its Russian gas client it reported “correspondence with Tribeca Film Festival on future sponsorship options.” That just happened to be the year Tribeca served as one of the few theatre runs of Josh Fox’s Gasland II.

Coincidence? I doubt it. This is how foreign influence is done and it is impacting the Pennsylvania gas industry.

There’s but one antidote to all of this; sunlight. Pennsylvania can and should be requiring non-profit tax returns in the Commonwealth to include disclosure of all donors giving such organizations more than $5,000 per year. It should also request the Auditor General investigate the unholy alliance between these organizations and foreign actors. What we need is exactly what you’re doing today; exposing of the foreign special interests behind so much of what passes as fractivism.