A recent problem with the Mariner East 2 pipeline—a sinkhole issue in an area typified by sinkholes—has given Food & Water Watch with an excuse for mischief.

A third sinkhole related to Mariner East 2 pipeline work and the uncovering (and subsequent shutdown) of the Mariner East 1 pipeline has some folks in Chester County, PA stirred up and rather grumpy. A group of some 150 anti-pipeline protesters (perhaps a better word is “mob”) gathered Saturday in Chester County near the sinkhole sites, carry signs and chanting but there’s more to the story. 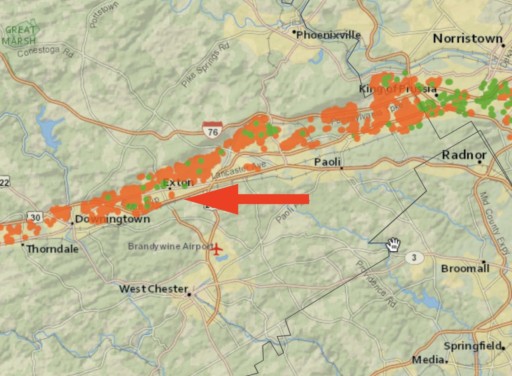 Did the protesters demand the DEP and Gov. Wolf force Sunoco Logistics Partners, the builder of ME2, to find a different route around a geography known for sinkholes for decades? No.

Did they demand the DEP and Gov. Wolf force Sunoco to slow down in an attempt to prevent any more sinkholes? No.

Did they demand the DEP and Gov. Wolf demand Sunoco come to the table to talk about how they will prevent any more issues in the area–and compensate properties near the sinkhole? No.

Their demand of Wolf: Shut it down, now. And keep it shut down. Cancel the entire multi-billion dollar ME2 project that is 93% complete. In other words, their demand is unreasonable, not realistic, not the way adults behave when they have disagreements and concerns.

Here’s some of the Delaware County Daily Times reporting:


More than 150 anti-pipeline demonstrators marched – while chanting and carrying protest signs – to the scene where three sinkholes have recently developed at the drilling site of the Sunoco Mariner East 2 pipeline.

Protesters chanted as they marched toward the site on Lisa Drive.

Homemade signs read, “Putting the public back in public utilities,” “We demand clean water, our Constitutional rights,” “No ME2, Governor Wolf revoke the permits” and “Corporate fat cats destroying our quality of life.”

…Most of the right-of-way for the now-under-construction Sunoco Mariner East 2 pipeline runs through the right of-way for the 1930s Mariner East 1 pipeline. The pipeline crosses 350 miles – the full width of Pennsylvania –from the Marcellus Shale deposits in West Virginia, Ohio and Western Pennsylvania while carrying highly volatile liquids to the former Sunoco Refinery in Marcus Hook, Delaware County.

Carolyn Hughes and other speakers called for an immediate stop to drilling.

“A community is coming together to say this is enough,” Hughes said. “We as a community are united to say no more.

“(Chester County) is a high consequence area because of our dense population. I say look out Sunoco.”

At the site of the sinkholes, a small group of protesters donned hardhats with CPSI stenciled on the brim – Citizen Pipeline Safety Inspectors.

The faux inspectors watched as a backhoe dug just feet from the ME1 pipeline, with more than a dozen Sunoco workers legitimately wearing hard hats.

“Sunoco, the DEP and the governor are not keeping us safe, so the citizens have taken it upon ourselves to initiate a citizen-funded risk assessment in collaboration with Sen. Dinniman,” Speaker Ginny Marcille-Kerslake said.

Sam Rubin, mobilization organizer from the group Food and Water Watch, donned a helmet and inspected the sinkholes, and then said, “Gov. Wolf refuses to take safety measures. This project puts our homes, neighbors and schools at risk. We don’t have any more time to waste.”

…“This is not helping Pennsylvania in any way,” she said.

Parker also talked about the drop in real estate values for neighbors like her.

“If I drove by and saw all the construction people with hard hats and digging at properties, or the sinkholes, I’d think about another neighborhood,” she said about prospective home buyers…

And, a homeowner whose back yard is affected by one of the sinkholes calls Sunoco’s actions, “crazy,” according to anti-gas shill StateImpactPA:

Lisa Drive resident T.J. Allen’s backyard is dominated by a fenced enclosure which he says contains two sinkholes. About 10 feet from his house, another hole surrounded by orange fencing had been filled with concrete by Sunoco in an attempt to protect Mariner East 1 from the sinkholes a few feet away, Allen said.

The combination of sinkholes and a pipeline from the 1930s, which is when Mariner East 1 was built, makes Allen fear for his safety and that of his 72-year-old mother, who lives with him.

“They put us all in danger, didn’t evacuate us, didn’t even tell me, didn’t knock on our door,” said Allen, 46, an independent construction contractor. “It’s crazy, man.”

Allen said he’s ready to leave at a moment’s notice.

“It feels as though at any minute I might have to run out my house and get my valuables together,” he said. “I have a go bag in there with my medication, my mom’s medication, my deed, everything.”

Sunoco spokesman Jeff Shields said there are only three holes, all of which have been grouted and secured.

Shields rejected complaints from some residents who say that people are asked to leave the area where Sunoco and its contractors are working.

The suspension of Mariner East 1 operations for an estimated 10-14 days will allow Sunoco to show that the pipeline is safe, as it has been since it was built, Shields said.

“This period should allow us to share what our professional geologist has established to date – that the Mariner East 1 pipeline is stable, is located in suitably safe geology, and will continue to operate safely as it has done for decades,” Shields said in a statement.

Editor’s Note: Notice the map above, which shows, just as Jim pointed out, there are sinkholes throughout the area. They’re common; so common Pennsylvania DCNR has published a booklet on the subject stating “the formation of sinkholes is part of the natural weathering process and that this process has worked on the limestone bedrock over a very long period of time.” It also notes “subsidence can also occur as a result of under­ ground mining, excessive pumping of groundwater, or subsurface erosion due to the failure of existing utility lines.” The vulnerable areas are illustrated in blue on this map from the report (Chester County highlighted in yellow): 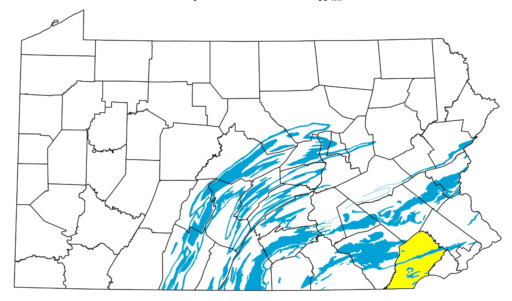 As the DCNR report indicates, sinkholes can be caused by discharging water from rain gutters, stormwater detention basins, storm sewers, water line leaks, drilling water wells, or construction of almost any kind. There’s nothing unique about pipelines in this regard. Here’s more from DCNR:

It is important to remember that a sink­ hole is nothing more than a large natural drain that has suddenly opened. For a sinkhole to occur there has to be some other opening in the subsur­face to accept the lost material, and there needs to be some medium to move the material into that opening; this is commonly water. When initiat­ing a repair, the objectives are to stop loose material from movng down into the drain and then to remove the triggering mechanism.

DCNR explains that “sinkholes often affect utility lines” and provide this helpful photo showing how “the void between the exposed bedrock has been filled with concrete to provide a stable base for additional backfill materials and for the overlying utility pipelines.” 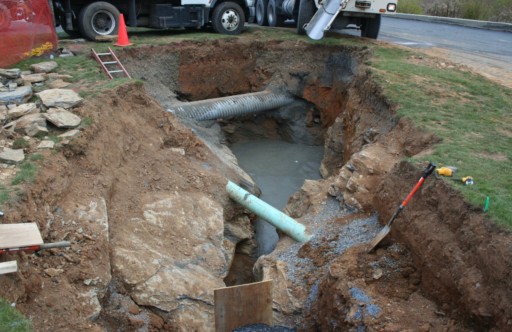 This is, apparently, exactly what the Mariner East 2 contractors did in response to the sinkhole in question to protect the existing pipeline the Mariner East 2 parallels. So, the companies involved have reacted to a common problem in the vicinity in a normal precautionary way.

The hysteria suggesting there has been something highly unusual and threatening happening has been been whipped up by politicians, wanna-be politicians and especially, Food & Water Watch. Check out this post and this one for more on who Food & Water Watch really is and what they’re about; its anything but food or water. They’re extremist special interests financed largely by dark money who prey about situations such as Mariner East 2 finds itself in.

This is not to absolve the company of fault if they’ve failed to properly train and supervise their contractors or anything else, but, clearly, this latest sinkhole is not an appropriate excuse for ending the project, nor will it have any impacts on property values given the existence of the older pipeline and common nature of sinkholes in pricey Chester County. No, Food & Water Watch is an opportunistic leech jumping on a relatively minor incident to advance its own extremist agenda and pad its wallet.