Food & Water Watch is one of the most vile special interests out there. It also offers a teaching moment as to how the gentry class launders money to lobby.

There are few more contemptible specials than Food & Water Watch. Run by the haughty Wenonah Hauter, who’s made a pile of money milking the guilty-ridden  rich to advance essentially socialist causes, this group engages in some of the grubbiest tactics imaginable. It pretends to be grass-roots but is anything but. It gets most of its money from donor-advised funds that allow big-money special interests to avoid disclosure. It’s nothing less than money-laundering to hide lobbying by private foundations who aren’t legally allowed to do it.

I’ve detailed this abuse many times here on this blog, but I don’t believe there’s any worse example than what happens with Food & Water Watch. It operates on a budget of roughly $17 million per year, according to the 990 return it filed with the IRS in 2016. It pays over $10 million out in payroll plus almost $2 million for contractors such as direct mailing companies and the Josh Fox Svengali of Phony Environmental Causes, David Fenton, who got over $650K. But, what’s interesting is who provides the money.

Schedule B of every 990 return identifies any contributions over 2% of their revenue, which is any over $340,000 or so in the Food & Water Watch case. Schedule B, by law, doesn’t have to be disclosed to the public, although that rule most definitely needs to be changed. Some organizations (very few) include Schedule B in their public disclosure copies. Others remove it altogether and some file it showing the amounts without the names of the donors giving those amounts. Food & Water Watch falls into the third category and here’s what it shows for 2016: 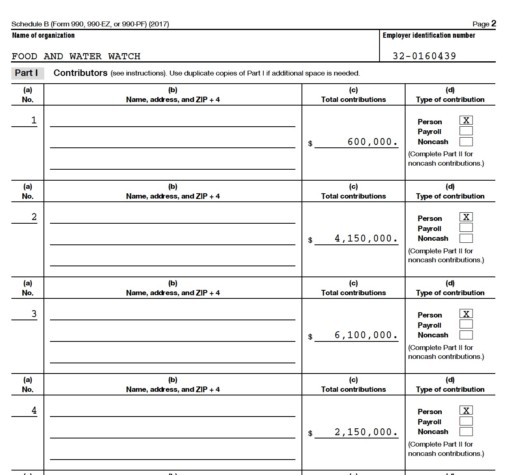 Add those numbers and you get $13 million or 78% of the Food & Water Watch budget that comes from merely four donors. Who are they and what are their interests? Well, we can’t know precisely. But, we know from past research how this odious organization works. It raises most of its money from what are known as donor-advised funds. These are pass-through entities that provide an additional degree of separation between donor and recipient. A donor who gives through them can designate where his or her money goes without having their name even remotely connected with the particular cause to which it goes. It’s Money Laundering 101.

The only way to even get the slightest idea of who is financing Food & Water Watch money is to search for organizations that donate money to it and then search again for who donates to those organizations, bearing in mind there is a veil of secrecy that can only be pierced by first making educated guesses about who the donors might be. We do some idea, from earlier investigations, who some of those entities might be and a search of them quickly revealed the following big donations to Food & Water Watch on other 990 returns:

We learn the $6,100,000 donation is from the Greater Kansas City Community Foundation, which has reinvented itself as what is essentially a giant $3 billion organization that includes a collection of donor-advised funds. Its 990 Schedule B shows one donor who gave over $28 million and several others who gave over $10 million. Who are they? It’s almost impossible to decipher with so many donors, most of whom are individuals at this level. We get some clues, though.

One of those clues is the Schmidt Family Foundation, which gives money to the Greater Kansas City Community Foundation and also gave $320,000 directly to Food & Water Watch in 2016. This is Schmidt as in Eric Schmidt, the Google/Alphabet guy.

There are several others but the picture is clear. Every single one of these entities is a fractivist outfit with a special interest mission. It’s often to promote corporatist renewable energy schemes such as the Ivanpah solar boondoggle Google undertook with taxpayer money. In other cases, it’s buying off the natural opposition to what Google does in selling your name and privacy. The most important mission though is to buy exclusiveness and elite status. That comes through in numerous grants for projects on Nantucket where the median household income is 60% above the U.DS. and the median home price is $895,000.

These are typical of the people who fund Food & Water Watch. They’re not grass roots but, rather, huge elite tree trunks. And, they funnel they’re money to groups such as Food & Water Watch in multiple ways. Schmidt, for example, gives to the Silicon Valley Community Foundation, too. Moreover, the Sustainable Markets Foundation, which Schmidt supports, also funds Food & Water Watch as does the Park Foundation. This is how the money is laundered and spread around to be directed to Food & Water Watch and other organizations, much of it being done behind the walls of donor-advised funds.

One can also see how this works in one of Food & Water Watch’s own grants. It only gave seven in 2016, mostly to what appear to be closely related entities with whom they are engaged on the ground in various places around the country. One of those grants was a $42,000 grant to the Catskill Mountainkeeper for “fracking issues.” What’s that all about? Why would the Mountainkeeper, which has access to both Schmidt and Rockefeller cash and a state solar slush fund, need money from a fellow fractivist group on the ground? What kind of work is Mountainkeeper doing for Food & Water Watch? And, what exactly does “fracking issues” mean?

Something doesn’t ring right about that, bit it illustrates the convoluted nature of fractivist funding. The one thing we do know, though, is that Food & Water Watch is as fake as it gets. It’s nothing but a bunch of wealthy elitists pulling a fast one and engaging in the worst sort of lobbying under the cover of a phony public interest group.