Fracking opposition is largely financed by the gentry class and other special interests. No better example exists than the Civil Society Institute. The following is an updated version of a story we did here three years ago on this phony outfit.

It sometimes has the appearance of a grass roots rebellion. An empathetic media is only too happy to report it as such, but fracking opposition is cultivated, funded and promoted by the America’s gentry class.

The names pop up regularly in the news as if there repeated sudden outbursts of public opposition to fracking, a pipeline project or a LNG port. Catskill Citizens for Safe Energy, Chesapeake Climate Action Network, Clean Air Council, Dakota Resource Council,  Delaware Riverkeeper, Environmental Advocates of New York, Ohio Valley Environmental Coalition, Otsego 2000, Physicians, Scientists and Engineers for Healthy Energy, Responsible Drilling Alliance — these are the names of supposedly grass-roots anti-fracking organizations from across the country. They are, in reality, satellite operations of gentry class special interest groups.

Each of the above organizations and several others has been a recipient of significant funding from an entity know as The Civil Society Institute, Inc., one of those numerous charities with mushy sounding names that are used by trust-funders and other wealthy individuals to exercise political influence on a tax-exempt basis. They shift the burden of paying taxes on interest and dividends earned on inheritances to the rest of us as they funnel the money through foundations to pursue pet political interests. 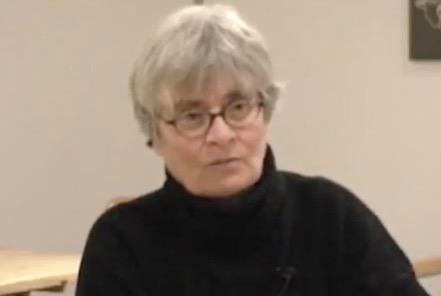 The Civil Society Institute, Inc. is located in Newton, Massachusetts, far away from any fracking and such. Fracking, though, is the latest convenient cause of a serial protester by the name of Pam Solo who happens to run the outfit. It’s a great gig compared to when she was a nun associated with the radical Sisters of Loretto.

Solo apparently started as a Vietnam War protestor. When the war ended, she tells oral historians, she had to face the reality “there wasn’t much left for us to do in terms of grass roots mobilization.” Needing another adrenalin fix from raising her fists in opposition to something, she went on to protest the Rocky Flats nuclear weapons plant, which offered a new cause for her.

Then she became associated with something called the Peace Institute. That was followed by the nuclear freeze movement, Congresswoman Pat Schroeder’s presidential campaign, embryonic stem cell research and a host of other causes. Solo has bounced around from one cause to the other depending on what was trendy at the time with the gentry class she loves to manipulate.

Not bad for a nun, whose job was apparently limited to passing out some $11,989,096 in grants for those years. That’s a 29.4% commission. As I wrote the last time I reviewed Civil Society Institute financials, I too, am Catholic. Can I become a co-member of the Sisters of Loretto? Is is a new age, after all.

Earnings like this apparently allowed Solo to invest in a restaurant franchise called O’Naturals (another cause) that later went belly-up and, probably, this fashion shoe enterprise launched by her son. She was given $35 million in the 1990’s to launch the Civil Society Institute and, although the glowing article about it doesn’t mention who it came from, the donors were members of the Lutz family. 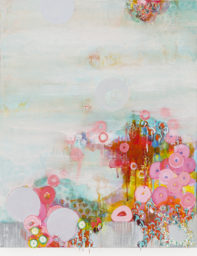 One of the co-founders is artist Sally Lutz. The money today appears to come from Sarah Lutz, another artist and her husband John Van Rens through the Lucretia Fund, which is, for the most part, simply the Civil Society Institute in another guise. (Sarah Lutz produces paintings such as the one to the right, using a cake decorator to paint.)  Pam Solo is on the board of that, too, and much of their money was, according to their 2013 filing with the Internal Revenue Service, invested in HCC Feeder Fund, one of those slightly suspicious Cayman Islands funds.

Where the money really comes from is unclear, for obvious reasons. We can be reasonably sure it doesn’t come from selling art, though. Moreover, the tailoring of their grants in recent years to a tight circle of fractivists mostly from the Marcellus Shale region suggests a very specific special interest. It certainly isn’t what Solo suggested back when she got that $35 million (emphasis added):

“Solo says she has a plan of action and that she is optimistic about changing such institutions as business and government that, she maintains, make our society not very civil…We are also looking at the way business and the economy contribute to inner civility…A big part of our message is that we have to take responsibility for our community, our families, our own behavior, and our own nastiness. At the same time, we have a right to expect that the institutions that run our society, government and business also have rights, responsibilities and roles to play in that.”

That Solo didn’t mean a word of this is evident from the actions of those fractivist groups she funds while taking down that huge salary. She funded the nastiness of Catskill Citizens for Sustainable Energy, which used the funds to prepare a glossy anti-fracking brochure complete with skull and bones imagery and a bullet list of falsehoods. Every one of the groups listed at the beginning of this article has engaged in similar travesties – all very uncivil, if you will.

Solo also funds two very intriguing professional service groups. One is The Hastings Group, led by Senior Partner Scott Staph, who is a social media and viral marketing expert. According to SourceWatch, he previously served as “Assistant to the President of the Tobacco Institute” and as “media relations specialist and spokesman for the Institute.” Here he is in action:

The Hastings Group also ran to the rescue of Cornell Professor Bob Howarth, who is associated with Physicians, Scientists and Engineers for Healthy Energy, which regularly receives funding from the Civil Society Institute. Howarth is a co-author of junk science studies saying natural gas is worse than coal and, according to Jon Entine, “hired an aggressive PR firm, the Hastings Group, to promote his politicized viewpoint.” It appears the Civili Society Institute may have been the conduit, providing $397,875 to Hastings in 2015.

The other interesting hire is the Pawa Legal Group, the principal of the firm being Attorney Matthew Pawa, one of the ringleaders in the RICO-like pursuit of ExxonMobil by certain politically motivated Attorneys General, New York’s Eric Schneiderman and Massachusetts’ Maura Healey being among them. Pawa, in fact, was instructed by Schneiderman’s hatchet man not to tell a reporter he secretly briefed AGs prior to an infamous press conference with Al Gore when the scheme was launched last year. It’s all very uncivil, if you ask me.

Solo and the Lutz family are funding incivility on a major scale. The fractivists involved aren’t grassroots either. They might have started out that way, but what sustains these enterprises in nearly every case is special interest money. Fractivists are but pawns in a chess game being played for those special interests by professional serial protestors who make a very good living doing it.

28 thoughts on “Flying Solo: The Uncivil Story of How Fracking Opposition Arises”