The fracking fables surrounding natural gas development, like Aesop’s, seem to hang around a while and every now and then it’s important to go back and remind ourselves of the facts, which absent repeating, will get lost in all the storytelling.

There seems to be no end to fables regarding fracking and natural gas development.  They persist in the minds of true believers who want to suppose there is a windmill out there to tilt at.  Their psyches require enemies to fight and so they simply repeat the same old allegations and keep asserting the same old baseless statements.  Evidence is irrelevant as long as you have the ability to keep asserting and speculating.  I run into every day on this blog as commenters will assert falsehoods about fracking as if they were so obvious no evidence was required.  If you challenge them to produce some facts they simply repeat the accusation.

Let’s take a look at five of the biggest fracking fables.

Fracking Fable No. 1:  “Natural Gas Is Dirtier Than Coal”

Professors Anthony Ingraffea and Robert Howarth of Cornell University have contended natural gas is dirtier than other fuels when the total emissions over its life cycle of production and use are considered, due to the impacts of compressors, trucks and other equipment necessary to develop the resource, among other reasons.

The Ingraffea/Howarth research has been debunked by no fewer than 10 major organizations and/or peers as seriously flawed.  Carnegie-Mellon University says “We don’t think they’re using credible data and some of the assumptions they’re making are biased.”  Cornell University’s Lawrence Cathles goes further, saying “none of [Howarth’s] conclusions are warranted” and IHS-CERA notes “The Howarth estimates assume that daily methane emissions throughout the flowback period actually exceed the wells’ IP at completion. This is a fundamental error, since the gas stream builds up slowly during flowback. Compounding this error is the assumption that all flowback methane is vented, when industry practice is to capture and market as much as possible, flaring much of the rest. Vented emissions of the magnitudes estimated by Howarth would be extremely dangerous and subject to ignition.”

See this summary of comments from others for full evaluation of the Ingraffea/Howarth work.  Also, see “U.S. Leads in Reducing Carbon Emissions, Due to Natural Gas, Despite Howarth” for a overview.  This latest report includes more evidence, including this chart indicating the amount of CO2 per person is now back to 1964 levels, with no help from government but a lot from natural gas. 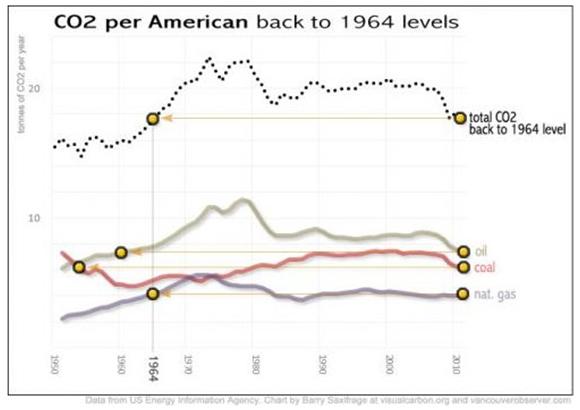 Every day articles appear stating hydraulic fracturing is threatening water supplies and suggesting it has contaminated some.  The Water Defense blog, for example, says “Across the country, state regulators have documented over 1,000 incidents of groundwater contamination related to fracking” and precedes this statement with a claim “fracking is a method of natural gas drilling.”  Both are false.

Hydraulic fracturing is a separate process from drilling a natural gas well (they can take place months apart) and has never, in the entire history of the process contaminated a single water supply anywhere in the US, even though performed millions of time.   So, how do Water Defense and others make their statement?  Well, by deliberately associating “fracking,” which sounds mysterious but isn’t, with anything connected with natural gas development, thereby blaming any natural gas incident, no matter how trivial or remote from hydraulic fracturing itself, on that process.

It is a clever juxtaposition of terms but distorts the truth – that no groundwater source in this country has ever been contaminated by the process anti-development groups desperately want others to believe is responsible. President Barack Obama’s former EPA Administrator, Lisa Jackson, in fact, told a U.S. House Oversight and Government Reform Committee: “I’m not aware of any proven case where the fracking process itself has affected water.”

See this summary of statements by state regulators across the nation and saying the same thing as Jackson – hydraulic fracturing has not polluted water supplies.  There’s nothing unsafe about it and the record proves it.

Ever since the movie Gasland came out, there has been a popular misconception that hydraulic fracturing can lead to flaming faucets.  There have been numerous references to “firewater” and the image of fire coming out into the kitchen sink as a result of “fracking” has been impressed upon the minds of many.

Hydraulic fracturing, for the reasons set forth in Fracking Fable No. 2, has no connection with any flaming faucets anywhere.  Even assuming, however, that proponents of this idea meant to say natural gas drilling routinely causes flaming faucets, this is another myth, notwithstanding the fact drilling of any well, water or gas, can result in relatively rare incidents of methane migration in areas already characterized by shallow methane sources.

Like the Colorado area where Josh Fox took his infamous video and falsely blamed it on hydraulic fracturing, Susquehanna County, Pennsylvania, for example, has long been known for such shallow methane with as many as 78% of water wells exhibiting methane.  A study entitled “The Impact of Marcellus Gas Drilling on Rural Drinking Water Supplies” was conducted by researchers from the Pennsylvania State University and was funded by the Center for Rural Pennsylvania. The research showed there were no major influences from natural gas production, or hydraulic fracturing, on nearby water wells. 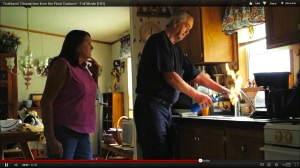 Activists opposed to natural gas development are fond of talking about the “prodigious amounts” and “massive quantities” of water used to conduct hydraulic fracturing operations, ignoring the recycling now taking place, which has substantially reduced the quantities of fresh water required.  They are, likewise, prone to say the water is “lost forever” but this is not correct.

We already know the amounts of water used are anything but massive, for example.  The Susquehanna River Basin Commission (SRBC), for example, indicates Marcellus Shale water use in total “represents a little more than half of the amount currently used consumptively by the recreation sector (golf courses, water parks, ski resorts, etc.).”

More importantly, however, is this basic fact of chemistry; the combustion of natural gas produces water.  Natural gas is largely methane (CH4), a naturally occurring compound of carbon and hydrogen.  When it burns, the hydrogen recombines with oxygen to create water. A  typical gas well will yield about 22 million gallons of water over 10 years as compared to the four million gallons sent below the earth.  The water temporarily removed from the hydrologic cycle is replenished within less than six months of production when combusted. A gas well that yields one billion cubic feet of natural gas, when combusted, will produce about 11 million gallons of water that is added to the water cycle, which is more than twice that used or retained in fracture stimulation.  This process can require as little as 12 to 18 months of natural gas production meaning gas wells are net positive contributors of water to the hydrologic cycle.

See this SRBC analysis of water use and this post for more data.

One of the most persistent myths of the natural gas opposition is that “fracking” is a matter of industrialization and permanently changes the landscape, destroying rural character forever and depriving residents of the pastoral beauty they value so highly.

Both natural gas drilling and hydraulic fracturing are temporary activities, the former lasting about two weeks and the latter about one week.  Pipelines and gas recovery equipment on the surface are permanent but barely noticeable when construction is completed.  There is, in fact, no other activity that produces so much economic return for the region with so little land disturbance.

Numerous farms and other spaces have been preserved from development precisely because landowners finally had a source of economic rent to cover the costs of taxes and other overhead expenses associated with land ownership. Natural gas offers tremendous income potential but also due to its incredibly small footprint, compatibility with agriculture, and lack of needed capital requirements.

The latest natural gas development plans for the Marcellus Shale provide for units as large as 1,280 acres (two square miles) with all wells for each unit being placed on a single pad of less than five acres in size.  Even after allowing for an access road of three-fourths mile in length to reach the pad, this amounts to total land disturbance of but eight acres, or six-tenths of one percent of the land. Putting this in perspective, a typical home on a three-acre lot will, with driveway and lawn included, disturbs a minimum of five to 10% of the land. A commercial or industrial enterprise will often cover more than 50%, and is seldom allowed less than that amount by zoning regulations.

Nothing has so little impact on the land we treasure as a finished gas well.  Also, see photograph below of finished natural gas well pad (lower center of picture) near Elk Lake School, which generates much revenue for the school.  There is also a pipeline in the picture.  See any industrialization? 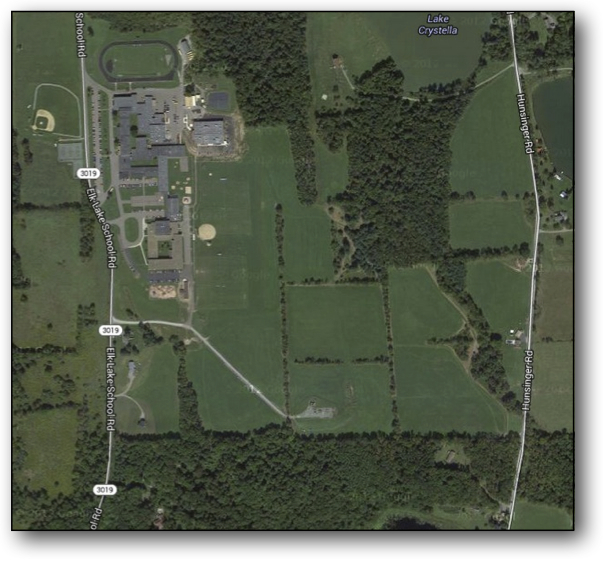 So much for all these fracking fables.  I’m not so foolish to think the opposition won’t dream up more, though.  They are very inventive, after all.  They’re born storytellers.