The time for tolerating fractivist antics of vandalism, violence and other forms of intolerant destructive behavior is past. It’s time to hand them invoices.

Those “peaceful” #NoDAPL protesters who tried to prevent the completion of the Dakota Access Pipeline at Standing Rock were anything but. During their months-long occupation of the Sacred Stone Camp, protesters threatened and intimidated local residents, abused animals and stole livestock, and left a trail of garbage and destruction in their wake. The cost to the North Dakota taxpayers for this “peaceful protest”: $38 million and counting.

But rather than apologize for the burden that these out-of-state activists imposed upon the taxpayers of North Dakota, the protesters bragged about it and threatened to use the same tactics on other communities who refused to give in to their extremist demands.

A California activist protesting the Bayou Bridge Pipeline in Louisiana boasted last February that she “was instrumental in contributing to the more than $22 million in Dakota Access pipeline security costs borne by North Dakota taxpayers” because she mobilized hundreds of students to come to Standing Rock.

“And that is in a place that has blizzards,” she said. “I image we could easily rack you up twice that [tax bill] in this comparable paradise, if you so choose.”

In an effort to prevent protesters from imposing similar costs upon the taxpayers in Pennsylvania during the anticipated protests of the Atlantic Sunrise Pipeline project, a lawmaker from Lancaster County is drafting legislation that would make violent protesters “pay for the emergency response they elicit and the damages they cause.” 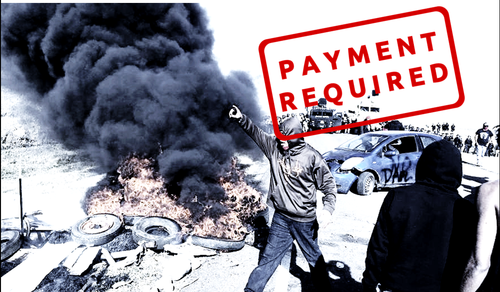 “Why should our taxpayers be stuck with the bill for the people who choose to do things the wrong way and not the peaceful approach?” said State Senator Scott Martin, a freshman Republican lawmaker from Martic Township.

It’s a fair question and one that may soon be put to the test.

Mark Clatterbuck, a vocal opponent of the Atlantic Sunrise Pipeline and co-founder of Lancaster Against Pipelines, said the protests at Standing Rock inspired him to see “what that resistance might look like and how a local community might come together in one place and kind of serve as the base or center of the resistance.”

According to Clatterbuck, who participated in the Standing Rock protests, “hundreds of people … have also signed pledges committing to civil disobedience to protect our homes, farms and properties” once pipeline construction begins. “It’s probably going to take civil disobedience for a long time,” he said.

Clatterbuck and other anti-pipeline activists established an encampment in Lancaster County that they are “using as the base of operations” for the Atlantic Sunrise protests while they coordinate with other protest groups around the country. Stephanie Graybill, who runs the kitchen at the camp, was extremely candid about the potential for a drawn-out, expensive engagement with the protesters, when she said, “Standing Rock’s the playbook for camps like ours.” 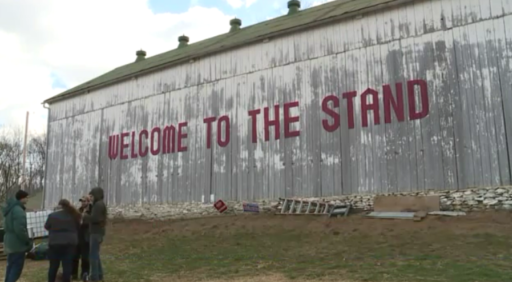 To be clear, Sen. Martin said his soon-to-be proposed legislation would specifically target only those “convicted of crimes related to rioting or public nuisance … or if the person is involved in hosting the demonstration.”

Martin said he is “more worried about destructive protesters coming from outside the county than local protesters causing severe problems.”

With the debacle of Standing Rock serving as the playbook, his concerns seem well placed.

Editors Note: One of our readers, Steven Burnley, a landowner from Broome County, New York, coincidentally sent me his take on the Atlantic Sunrise pipeline opponents and their efforts to recreate a Standing Rock protest in Lancaster County, Pennsylvania by taking over a local farm and renaming it “The Stand.” Steven noticed a few things about these protesters and their double-standards when it comes to issues of safety. He supplied the following photo of these fractivist malcontents engaged in some activity that would be cause to immediately shut down and fine any gas industry site if discovered. Yet, these fractivist protestors so reveled in it they were determined to preserve it for posterity: 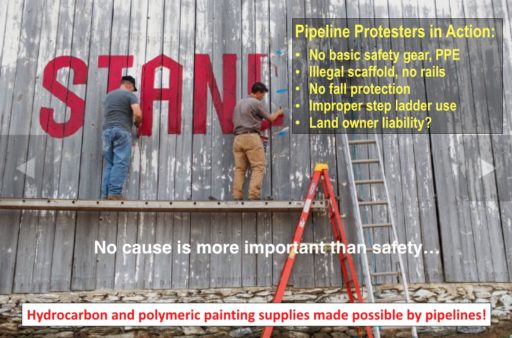 Not only are these fractivist protestors using products delivered by pipeline, but they’re also breaking every safety rule in the book at great potential liability to the landowner. What legal protection does the owner of this barn have from such careless antics if these bozos happened to get hurt and sued? Even if they don’t sue and no one cares about OSHA, it’s reasonable to expect OSHA will care, isn’t it? Who will pay that fine and/or invoice? The Conestoga Township officials who ran scared and issued a cobbled together temporary permit for it? Lush Cosmetics, who is funding this crap to sell trendy stuff to trendies? Good luck with collecting from either. It looks like the landowner allowing this protest could be stuck with two invoices for this fractivist nonsense if they’re not a whole lot more careful.

9 thoughts on “Fighting Fractivist Fire with An Invoice!”