Fertilizer, made with natural gas, has lifted nations out of near starvation, and made our modern lifestyles possible – shale gas is making it even better.

An interesting piece in Wall Street Daily titled “Everyone Wants to Dance with Shale Gas” focused on an aspect of natural gas that we don’t talk about nearly enough – its role as a feedstock for other industries. We have talked a bit about its importance to the petrochemical industry but this article addressed something we’ve only discussed in passing unit now – the value of our shale gas to agriculture, given its function as one of the key ingredients in fertilizer. Our ability here in the US to produce natural gas cheaply, moreover, has given us a tremendous comparative market advantage for attracting fertilizer manufacturing companies. 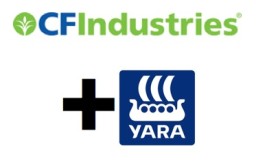 Here are some of the most relevant points from the story (emphasis added):

Two companies – CF Industries and Norway’s Yara International ASA  – are working on a $27-billion deal that, if agreed to, will create the world’s largest producer of nitrogen fertilizer.

…thanks to low-cost U.S. shale gas, CF’s profit margin in its nitrogen fertilizer division was a whopping 52% in 2013. In contrast, Yara’s profit margin was only 9.2% thanks to higher-cost European natural gas.

The key takeaway for investors is that this proposed merger may be just the start of a flurry of activity in the nitrogen fertilizer sector.

…Second, shale gas costs in the United States should remain low relative to the rest of the world.

…This cheap gas, according to Mark Gulley of BGC Financial, is already translating to $12.7-billion worth of new fertilizer plants that are set to start producing by 2020 in the United States.

There’s a lot more to the story and reading the whole thing is a must.

Nitrogen fertilizers are made from of ammonia (NH3), which is manufactured using the Haber-Bosch process illustrated below:

This process, according to the SLAC National Accelerator Laboratory (part of the Department of Energy) has had incredible impacts:

Natural gas is used in the process as the source of hydrogen to combine with nitrogen to make the ammonia that is the foundation of the nitrogen fertilizer. The shale gas revolution has lowered the cost of this ingredient in a major way, as this chart from a recent CF Industries presentation makes clear with a respect to projected internal rates of return for a proposed new urea (nitrogen fertilizer) plant: 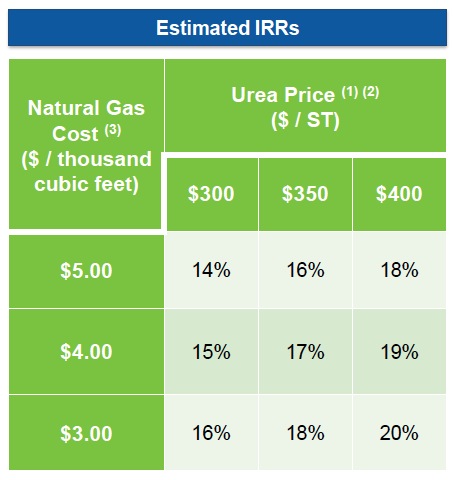 The company’s internal rate of turn on this project improves significantly with every price decline, as might be expected, but the key thing is this; the US is the only place (with the possible exception of Canada, which is why the Chinese have invested in Encana) where these low prices can be obtained. We have a locked-in comparative market advantage that will shift more and more fertilizer production to the US, demonstrating how crucial shale gas is to the rebirth of manufacturing as a whole in the US.

The jobs in the oil and gas sector are, in other words, just the beginning and let’s not forget the role of lower fertilizer prices to every aspect of American agriculture. Even organic producers benefit by ensuring a vital agriculture sector with the critical mass to attract other suppliers needed. Food prices to consumers will also be lower than otherwise  due to reduced costs of inputs. The Bureau of Labor Statistics, in fact, has noted this (emphasis added):

Yes, and now the mergers are occurring that may well yield an agricultural revolution in the US, all made possible by the shale revolution. We are winning on several fronts in the US as it proceeds and the best is yet to come.