FERC has smacked Governor Andrew “Corruptocrat” and his DEC hacks yet again in promptly denying a re-hearing request and calling out the state’s duplicity.

The Federal Energy Regulatory Commission (FERC) has clearly had it with New York, its politically corrupt governor and his environmental political hack, Basil Seggos. Seggos, of course, is Commissioner of the Empire State’s Department of Environmental Conservation (DEC) and his job is bend its will to that of Governor Corruptocrat and the NRDC gang which both he and the Cuomo are eager to appease.

It was only late October when Millennium Pipeline asked FERC to declare DEC had waived its authority to act on Millenniuum’s application for Section 401 Water Quality Certification by taking more than the year permitted under the Clean Water Act. That was followed by a quick FERC decision in Millennium’s favor,  prompting DEC to request a rehearing from FERC, which the latter has already denied. Moreover, the denial is 24 pages of fairly direct accusations of DEC duplicity. There can no question, at this point; it’s war and DEC has been put on defense for a change. 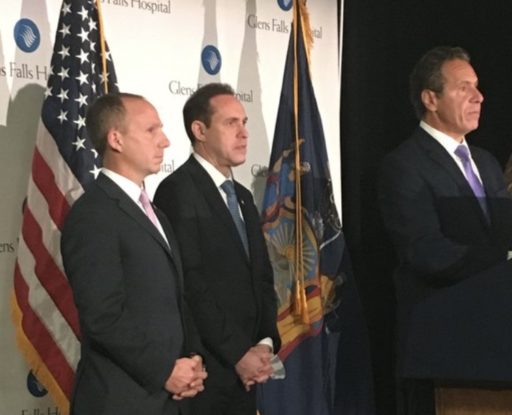 The denial of the request for rehearing is one of those heavily footnoted legal documents filled with citations and side issues that make it somewhat difficult to follow. Accordingly, I’ve highlighted the most important parts in this version. Here are the key elements where FERC tells DEC (really Govermor Corruptocrat and Basil “the Bootlicker” Seggos) they can go pound salt (emphasis added):

As a threshold matter, we disagree with the New York DEC’s contention that New York DEC, as the certifying state agency, is the appropriate agency to interpret “any ambiguous terms of the CWA.” [Clean Water Act]

There is no evidence that the Environmental Protection Agency—the federal agency charged with primary federal oversight of the CWA—has approved any of New York’s  procedural regulations it purports to rely on, much less its interpretation of these regulations as applied to the CWA waiver provision…

In its rehearing request, New York DEC cites Section 621.7 of New York Codes, Rules and Regulations,56 which New York DEC describes as providing that, “[the] public notice procedure for all applications, including for [water quality certifications], is triggered by a complete application.”

“Complete application means an application for a permit which is in an approved form and is determined by the department to be complete for the purpose of commencing review of the application but which may need to be supplemented during the course of review in order to enable the department to make the findings and determinations required by law.”

This definition suggests that New York DEC should have issued a notice of complete application when it received Millennium’s 1,200 page application, even if supplemental information was required…

Moreover, New York DEC appears to apply its interpretation of section 401 unevenly. Only on rehearing and in response to recent challenges in federal court has New York DEC fully and clearly articulated its position on Section 401 waiver. Courts afford less deference to agency interpretations that do not have a basis in practice or which are formed for the first time on appeal.

In its brief to the United States Court of Appeals for the Second Circuit (Second Circuit) in Constitution Pipeline Co. v. Seggos (Constitution), New York DEC explains that Constitution Pipeline Company, LLC (Constitution) voluntarily withdrew and resubmitted its joint application for Section 401 and 404 permits under the CWA, which “[t]he parties understood . . . would necessarily extend the maximum one-year review process ‘by which requests for certifications are to be approved or denied as set forth in in [sic] Section 401(a)(1)’ of the CWA.”

New York DEC further explained in its brief that, “[g]iven the incomplete nature of the application at that time, if Constitution had refused to re-submit the application materials,[New York DEC] would likely have denied the Section 401 Certification.”

This explanation demonstrates that as recently as October 2016, New York DEC acted under the assumption that an incomplete application requiring additional information would still trigger the one-year waiver period. Indeed, New York DEC had issued a notice of incomplete application pursuant to its regulations and had requested substantial supplemental information from Constitution, yet still understood the one-year waiver period had begun and thus requested resubmission of Constitution’s application to reset the clock.

New York DEC’s actions were similarly inconsistent regarding the Section 401 waiver period trigger in its consideration and denial of National Fuel Gas Supply Corporation and Empire Pipeline, Inc.’s (together, National Fuel) joint request for a 401 permit for the Northern Access Pipeline Project. In its August 10, 2017 brief to the  Second Circuit, New York DEC states that, although National Fuel submitted its incomplete 401 application in February 2016, “National Fuel and the Department later agreed that, for purposes of the Department’s section 401 review, the application would be deemed received on April 8, 2016, extending the deadline for a final decision on the Section 401 certification to April 7, 2017.”

While we do not opine here on the validity of that argument, we note that if New York DEC had applied in that proceeding the interpretation of Section 401 that it offers here on rehearing, entering into such an agreement would be entirely unnecessary—New York DEC could simply have postponed the start of the one-year waiver period indefinitely by deeming the application incomplete.

We also note that New York DEC did not issue a notice of complete application to begin its public comment period until January 18, 2017, yet nevertheless felt obligated to act by April 7, 2017—one year from the agreed upon “receipt” date—when it denied National Fuel’s application.

Regardless of the degree of deference that the courts may ultimately accord the Commission’s interpretation of section 401, the Commission is the proper agency to decide in the first instance whether New York DEC has waived its authority under Section 401 of the CWA. This much was confirmed by Millennium Pipeline Co. v. Seggos, where the D.C. Circuit, after finding that the court lacked jurisdiction to decide the waiver issue presented here, suggested an appropriate next step for Millennium would be to “present evidence of waiver directly to FERC to obtain the agency’s go-ahead to begin construction.” If the Commission had no authority to decide whether waiver had occurred, the court surely would not have recommended that Millennium raise the issue before us.

Moreover, unlike in previous CWA cases where courts have declined to give deference to the Commission’s interpretation of substantive provisions, the Commission indisputably has a central role in setting deadlines in NGA [Natural Gas Act] proceedings. As we explained in the Declaratory Order, section 401(a)(1) of the CWA is unambiguous. The plain meaning of “after receipt of request” is the day the agency receives a certification application, rather than when the agency considers the application to be complete…

[As] the D.C. Circuit stated: “In imposing a one-year time limit on States to ‘act,’ Congress plainly intended to limit the amount of time that a State could delay a federal licensing proceeding without making a decision on the certification request. This is clear from the plain text.”

There’s more—a lot more—but It isn’t necessary to get into it all. FERC used 24 pages when it might have used one because it’s telling the Federal courts New York State is playing corrupt political games and warning them not to be deceived. It’s about damned time!