The recently released FERC State of the Markets Report, 2018″ report is an update on the progress of the shale revolution as it moves forward claiming new territory.

The highlights say it all (emphasis added):

Even the wind generation increases could not have occurred without natural gas backup (and subsidies from ratepayers getting natural gas bargains).

You can read the full FERC report for the details, but here are the key segments:

In 2018, natural gas demand reached a record high, driven primarily by increased demand for natural gas-fired generation and liquefied natural gas (LNG) export growth. Record high demand was accompanied by record high production, with the largest growth from the Marcellus Shale and the Permian Basin. However, demand growth outpaced production growth, resulting in consistently lower-than-average storage levels that at times were the lowest in more than a decade. Low storage contributed to rising natural gas prices across the nation, although pipeline additions helped to broadly distribute growing production and ease tightness in some markets… 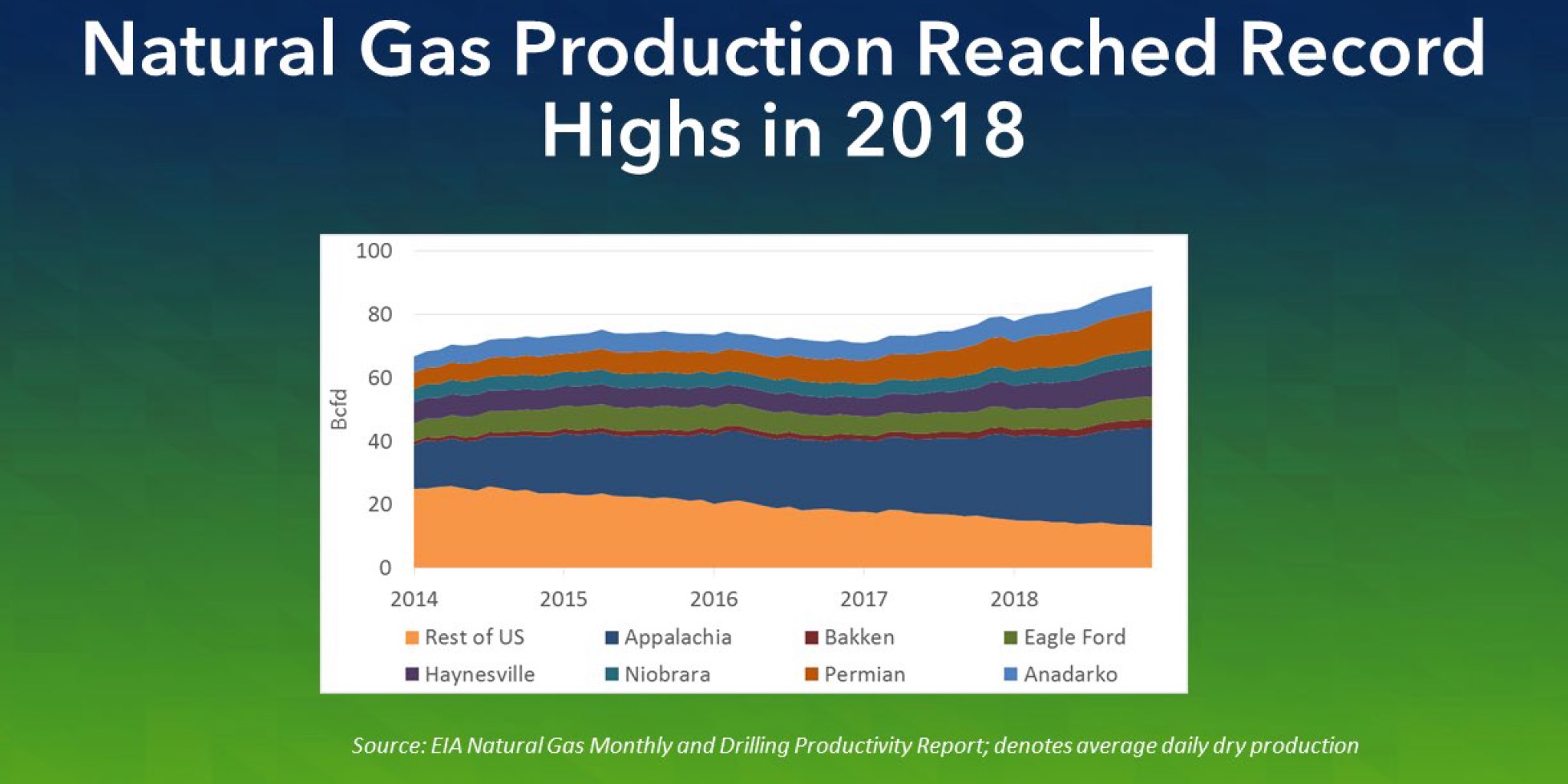 U.S. natural gas production continued to reach historic highs in 2018, averaging 88.2 Bcfd in November. For the year, production averaged 80.7 Bcfd, an increase of 8.5 Bcfd or 12 percent from 2017. The majority of this growth came from unconventional resources, including shale. Production from the Marcellus Shale, the most productive basin in the U.S., averaged 19.4 Bcfd for 2018 and grew nearly 2.3 Bcfd from 2017. 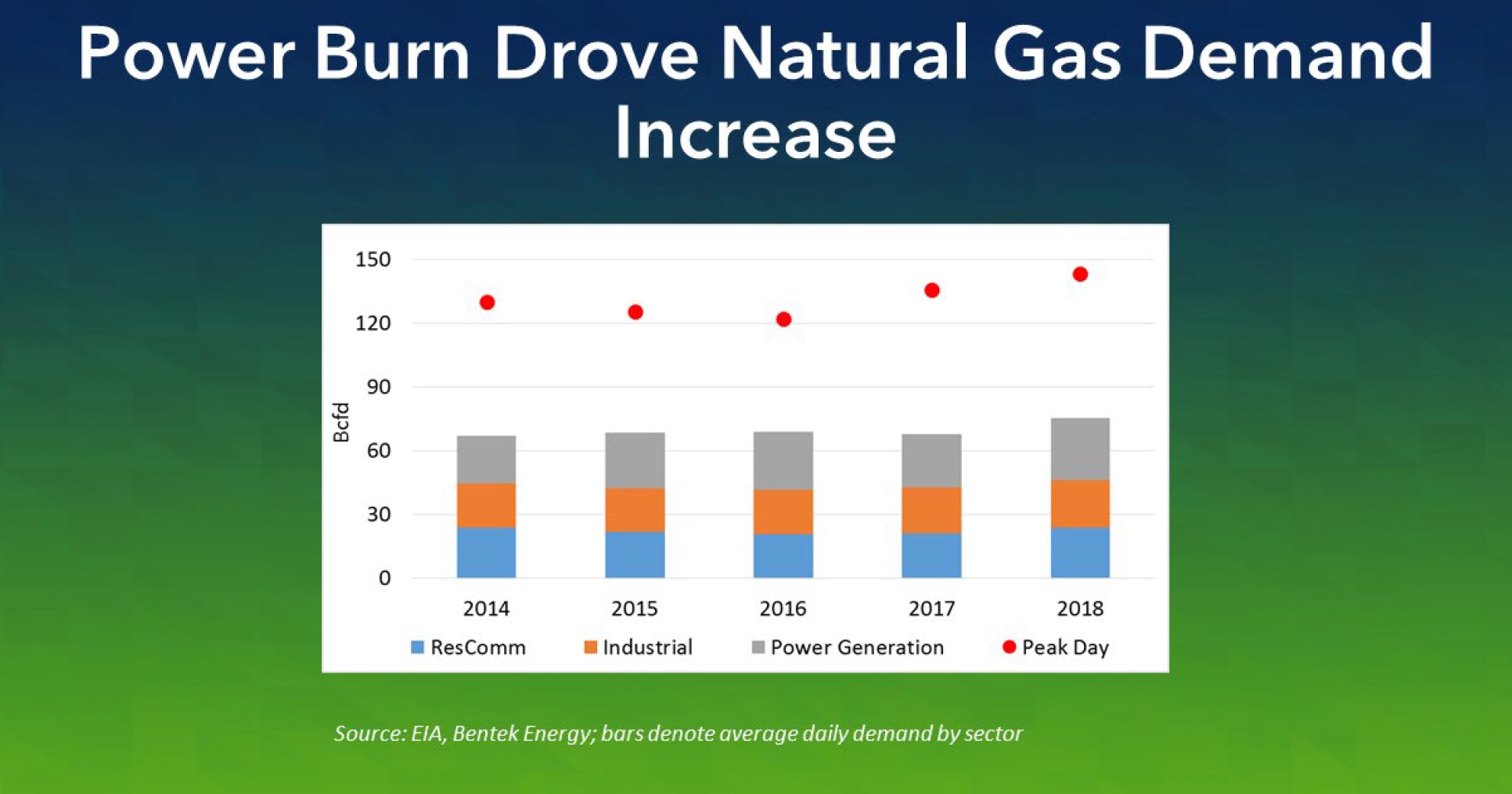 Natural gas demand increased in 2018, resuming a decade-long trend that had seemed to stall in 2017. Total demand increased 8 percent from 2017 to approximately 80 Bcfd. The majority of this increase was driven by natural gas demand for power generation. Power burn increased nearly 20 percent, or an increase of approximately 4.7 Bcfd year over- year, to an average of 30 Bcfd in 2018. Peak demand for gas-fired power generation of 43.9 Bcfd occurred on July 16, topping the 2017 figure by nearly 3 Bcfd.

The Polar Vortex in January 2018 saw the highest peak demand day ever recorded, with total demand exceeding 143 Bcfd. That record has since been supplanted by a 145 Bcfd peak during the cold snap in January 2019… 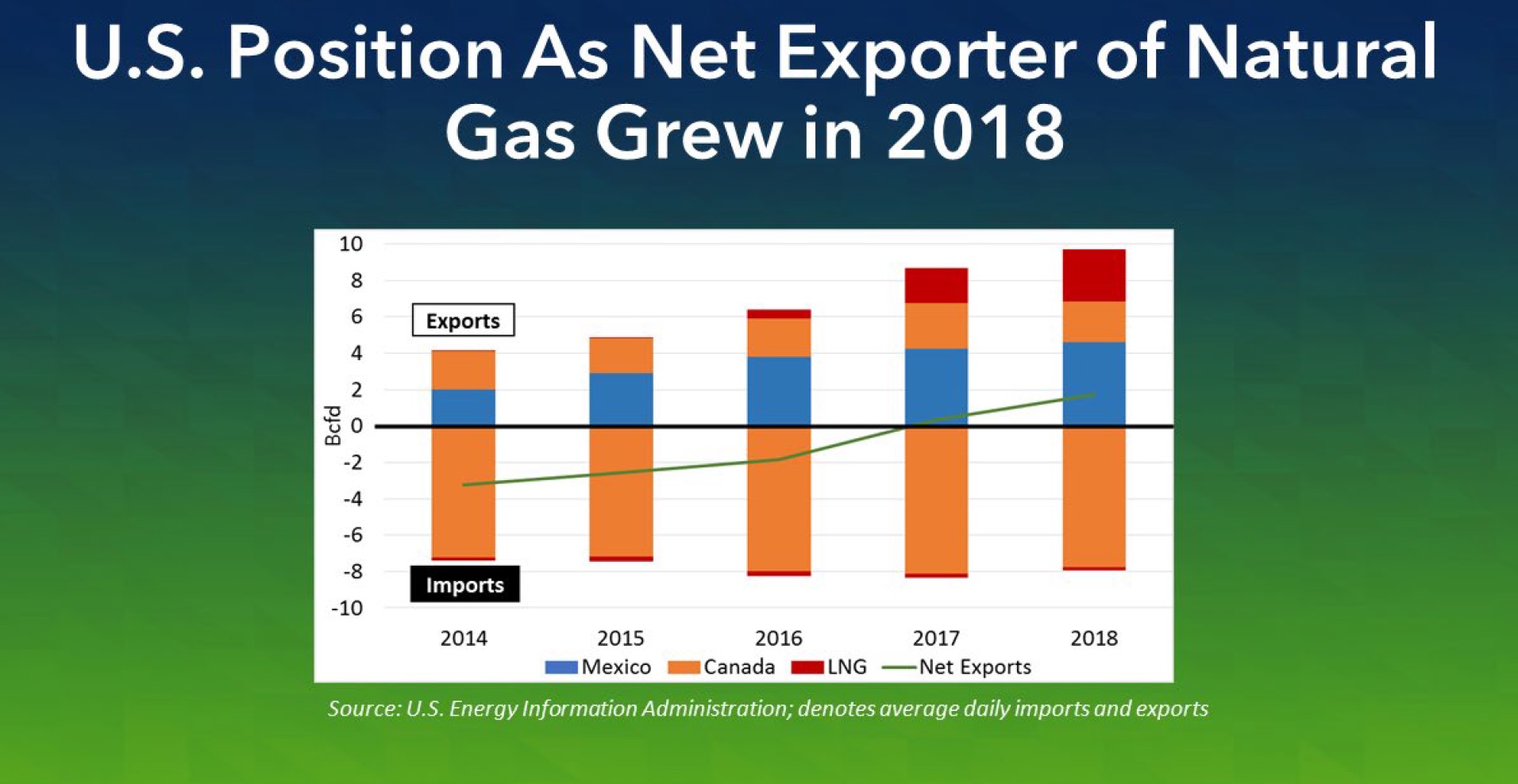 In 2017, the U.S. became a net exporter of natural gas for the first time in more than 60 years, and net exports grew to nearly 2 Bcfd in 2018 as new border-crossing pipeline and LNG projects provided additional capacity. The Cove Point LNG facility in Maryland began commercial service in March, while Sabine Pass LNG in Louisiana expanded its capacity in October. Total exports of LNG averaged nearly 3 Bcfd in 2018, up from about 2 Bcfd in 2017, and peaked at 5.3 Bcfd in December.

For pipeline exports, cross border flows to Mexico set a new high in 2018 of 4.6 Bcfd, up nearly 0.5 Bcfd from the previous year. Daily export flows to Mexico also set a new single-day record of 5.2 Bcfd in November. Pipeline exports to Mexico have grown continuously since 2010, as new pipeline infrastructure has been built both in Mexico and the U.S. Several critical links in Mexico’s national pipeline grid were completed in 2018 and early 2019…

Looking forward, LNG exports are expected to increase substantially in 2019. By the end of this year, as much as 4 Bcfd of new export capacity could be added, more than U.S. Position As Net Exporter of Natural Gas Grew in 2018 double that of 2018. New construction at Cameron, Corpus Christi, Elba Island, and Freeport LNG facilities are expected to be in-service and another expansion at Sabine Pass is also expected to be operational… 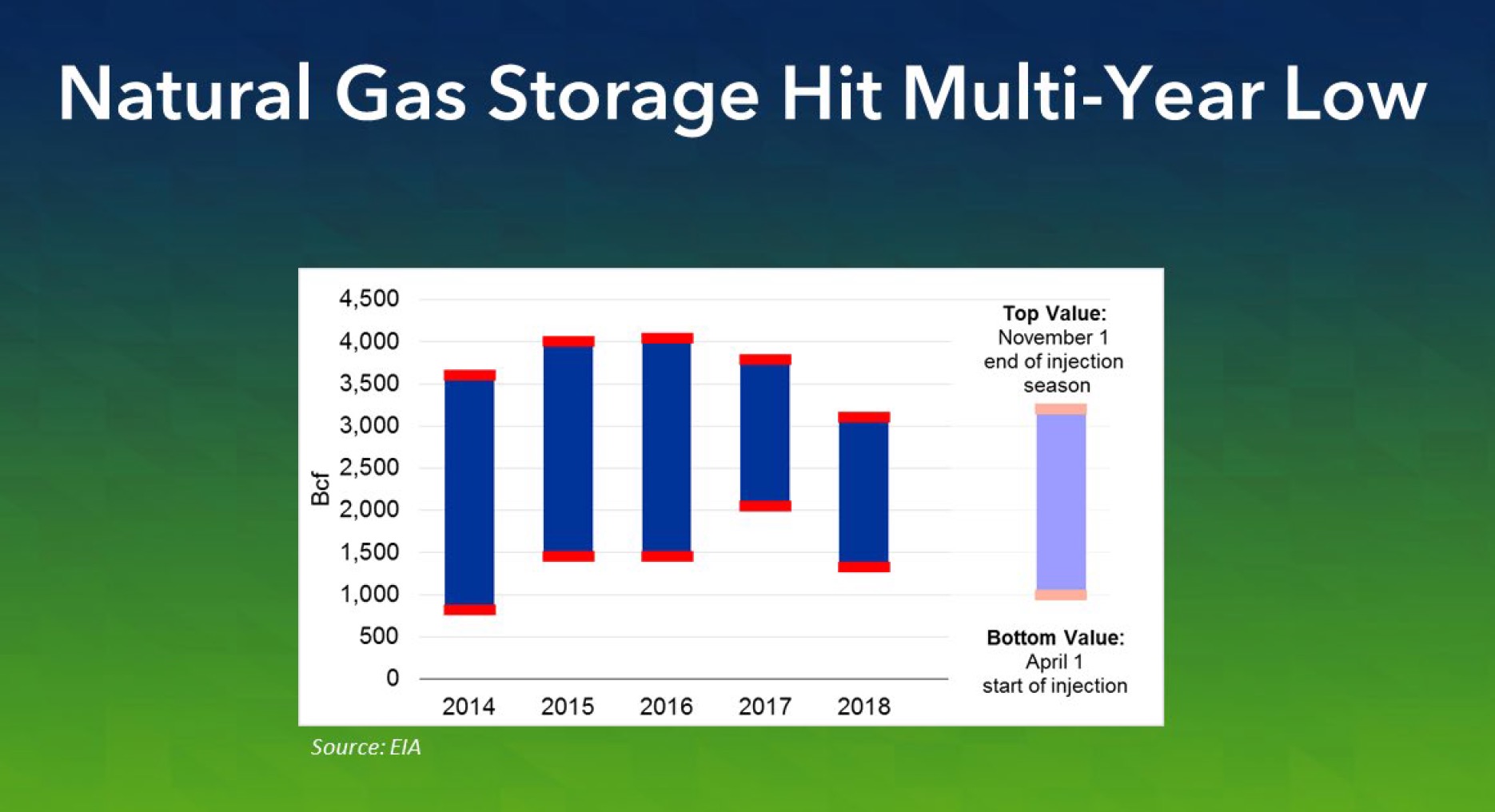 Storage inventory levels reached several notable low points in 2018. In January, extreme cold temperatures led to a 359 Bcf withdrawal, the largest single-week storage withdrawal on record. This, in part, contributed to a storage deficit that persisted throughout 2018 and accelerated in the final weeks of the year. During the first week of January, storage levels were 375 Bcf below the 5-year average and were at the second lowest level in the past 10 years.

Less than 1,900 Bcf was injected into storage between the start of April and the end of October, when the injection season typically transitions to the winter withdrawal season. This left storage inventories at a 13-year low of 3,208 Bcf as of the first November storage report. The deficit to the 5-year average widened further in November and early December, reaching as much as 725 Bcf… 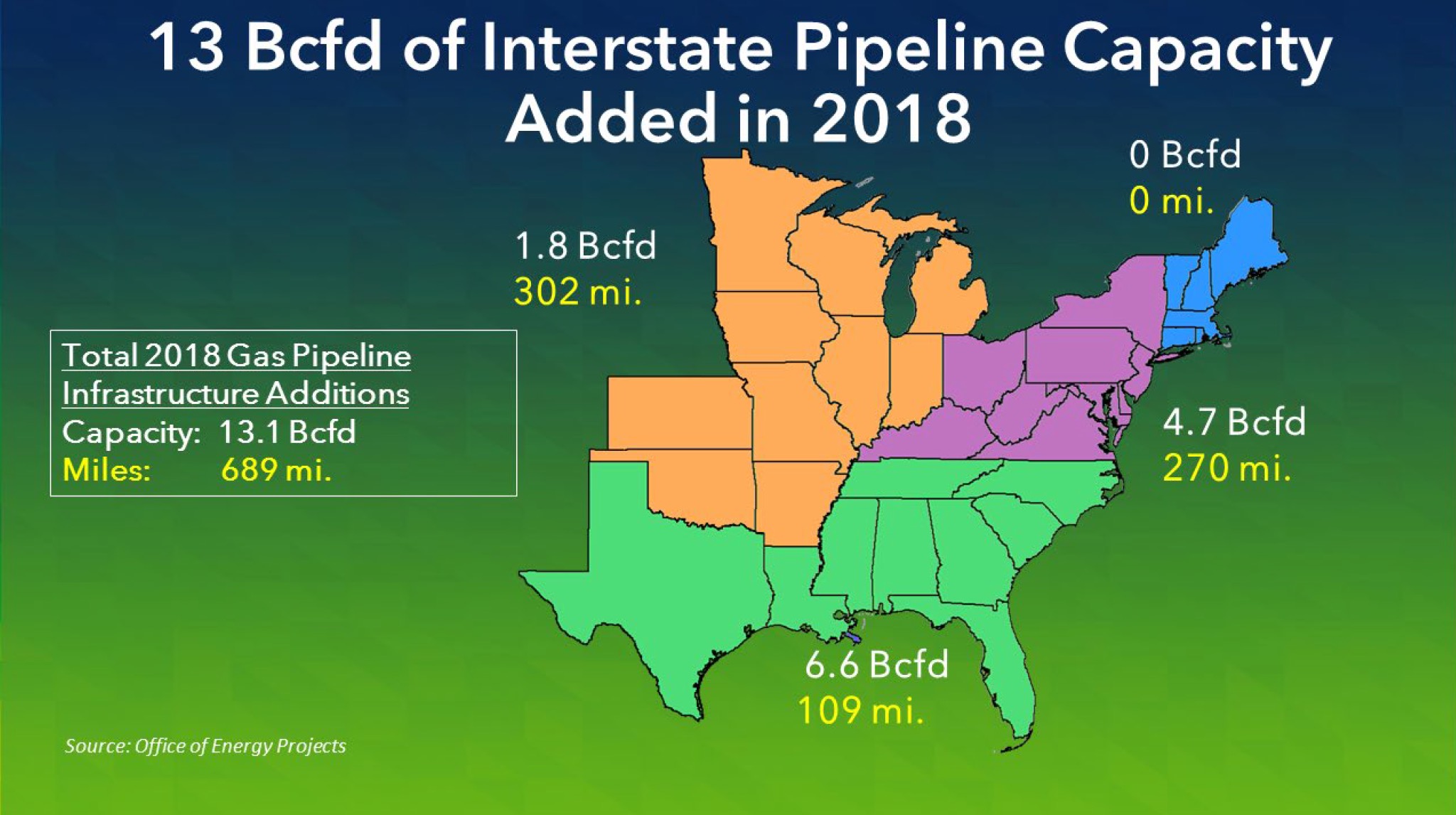 New pipeline capacity additions are also serving export markets with links to LNG terminals and pipeline exports to Mexico. Some of the significant projects that entered service in 2018 were: Columbia Gas’ 2.7 Bcfd Mountaineer Xpress project, which transports gas to pooling points on its system and to Columbia Gulf in Kentucky; Columbia Gas’ 1.3 Bcfd bidirectional West Virginia-to-Virginia WB Xpress project; and the 1.5 Bcfd NEXUS Gas Transmission project, which transports Marcellus and Utica sourced gas from Ohio through Michigan. New England saw no capacity increases in 2018, while New York had two separate projects go in-service on Millennium Pipeline for a combined capacity increase of 350 MMcfd.

There is so much more here. Notice, for example, that no new pipeline capacity was created in New England where it’s most needed. And, think about what the low storage numbers mean for future demand. Read the whole report and join me in saying “Viva the Revolution!”