The Farm Aid Concert in Saratoga was another example of celebrities with no knowledge of what they speak latching onto a cause and using crude empty slogans such “frack yourself” as a substitute for intellectual argument.

Just since my two recent posts on celebrity exploitation of the fracking issue, several more celebrities have piled on to demonstrate their ignorance.  It’s a fascinating thing, the way they all move in unison, like synchronous fireflies who all light up at once, pretending to be non-conformists while they act out in rigid conformity to what they perceive to be politically correct.  Because of this I can’t report on all of them; it would just get too boring, but let’s have one more go at it, just for fun.

Willie Nelson’s Farm Aid Concert in Saratoga took place over the weekend and he was accompanied by Neil Young, Dave Matthews and Pete Seeger, the now very old folk singer.  All four are or have been great performers in their time but their credibility to evaluate science is a bit suspect.  We also learned Mark Rufalo has started a petition at MoveOn.org to reopen EPA investigations in Dimock, Parker County and Pavillion.  Rufalo is famous for playing the Green Hulk, of course, which is everyone’s definition of seriousness. 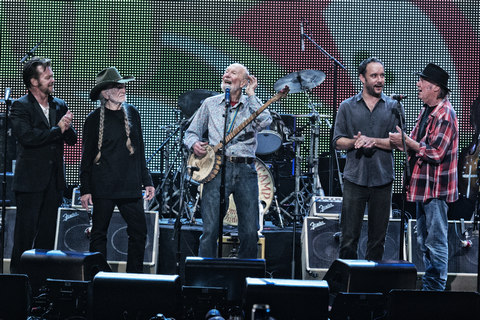 Let’s start with the Farm Aid performers.  Jon Campbell reported on it here and even helpfully included this video, apparently supplied by a concert attendee who thought it was useful to his or her cause:

My celebrity post about regarding Alec Baldwin brought out one comment that I was just too mean and had only rebutted him with one fact (everyone else saw it pretty much as I did).  I checked and found this was in error as I had actually used three sets of facts, but let’s assume it was only one.  How much rebuttal am I obligated to give to what is pure drivel?  I say none – it falls of its own weight, and that’s exactly what we have with this remark from Matthews:

“Don’t frack New York. Don’t frack our farmlands. And if you really need to frack something, why don’t you go frack yourself?”

Thank you, Jon Campbell, for including this tidbit in your report.  It says everything that needs to be said about the shallowness of entertainers who venture into science. Pay particular notice to how pleased Matthews is with his own brilliance when he sits down.

It’s also quite interesting how Matthews and friends purport to speak for farmers.  Again, Campbell helps by noting New York Farm Bureau, which represents dues paying farmers who actually have to make a living off their land, has supported natural gas development and the fracking that comes with it for several years and polls of its members indicate plurality support and only 16% who think it should not be allowed.

This is not to say there weren’t some real farmers at the Farm Aid Concert but we know there are more people who want to call themselves farmers than there are of the real deal.  It’s akin to people falsely claiming to be Viet Nam vets.  We also know there are more than a few trendy folks out there growing weird stuff in their backyards who also want to portray themselves as farmers.  Regardless, we know what real farmers, who grow things like corn and hay and raise beef and dairy cows, think and it’s overwhelmingly pro-gas because they need the extra income to survive New York’s high taxes.

What Willie Nelson, Neil Young and Pete Seeger said wasn’t reported but we’re told Young, a Canadian, wore a shirt saying It “New York is meant to be frack free.”  So much for intellectualism from the inventor of the LincVolt, a Lincoln Continental converted to a hydrid.  The $1 million car was set on fire by its recharging system, rebuilt and then broke down on the way to an environmental festival celebrating alternative energy, offering a poignant illustration of why a CNG conversion would have made a lot more sense.

Pete Seeger, now 94 years old, sang at the concert.  I confess to loving some of his music, but its hard to respect the man or his opinions.  Raised in boarding schools, he later became a Young Communist and still later a member of the Communist Party USA, defending the Hitler-Stalin pact of 1939, then Stalin against Hitler and so on, never renouncing Stalin until much, much later and proclaiming to be a communist (with a small “c”) as late as 2004.  Seeger’s idea of farm aid is a commune, after all.

And, Willie?  Well, there is no finer songwriter but all those years of smoking weed have given him a somewhat surreal outlook on what farming is all about to say the least. The lead article on the Farm Aid website, for example, is titled “How can family farmers protect our waterways?” and is about a supposed “dead zone” in the Gulf of Mexico.  It has little or nothing to do with any of the issues facing real farmers but, rather, is another screed about climate change, corporate farming and all the latest trendy causes.  Willie, no doubt, believes he’s helping farmers but I know lots of farmers and come from a family farm that still operates and I don’t know any farmers who look to Willie or Farm Aid for help.  You might say he’s not “always on their minds.”

Mark Rufalo, though, tries hard to stay on everyone’s mind and his latest little attention seeking endeavor is his MoveOn.org petition, which is as follows:

Preliminary studies by the EPA linked fracking to water contamination in three communities: Dimock, Pennsylvania; Parker County, Texas; and Pavillion, Wyoming. But the EPA abandoned its own findings and stopped these investigations. President Obama and new EPA Administrator Gina McCarthy must reopen these fracking investigations and provide residents with safe drinking water.

Rufalo comes up with some very lame excuses for why his petition is warranted and, in the process, ignores the buffalo in the room, represented by these facts:

Rufalo, if he has to turn to reinvestigation of these three cases, is down to the bottom of the barrel or has no idea what he’s talking about it.  The latter is the more likely, which brings us back to the point.  Why are these entertainers so determined to illustrate their ignorance?  I can only speculate (as I did here) but my advice to them remains the same – just shut up and entertain unless you have something meaningful or new to add to the debate.