The Rockefeller divestment story is one totally fake, phony, even fraudulent, story that almost no one is reporting correctly. The truth is startling.

Story after story has appeared in the press over the last several months about the Rockefeller family divesting their oil and gas investments, as if this was some sudden shift in the family’s position, some moral awakening about the horrors of their founders’ achievements, the source of their wealth. The truth is that the Rockefeller divestment is limited to the assets of the tax-exempt family foundations they control and use to push their own special interest agendas. Meanwhile, as they self-righteously preach divestment and engage in an orgy of virtue signaling, they are investing in the same industry that gave them the power to do so.

As I explained in an earlier post, Steven Clark Rockefeller, the son of Nelson Rockefeller, the former Governor of New York and Vice-President, is one of the trustees of the Rockefeller Brothers Fund, which funds all sorts of fractivist groups, including the Sierra Club, the Sustainable Markets Foundation, the League of Conservation Voters and 350.org. The last of these, of course, is the radical divestment group headed by that oracle of environmental doom, Bill McKibben. McKibben, not so coincidentally, is stationed at Middlebury College where Steven Clark Rockefeller is a professor emeritus of religion and previously served as college dean and chairman of the religion department.

Rockefeller is a trustee of the Asian Cultural Council and the architect of the “Earth Charter,” his experiment in developing a “global ethical consciousness.” He says the Rockefeller divestment story has “a moral and economic dimension.” What he doesn’t say, though, is that it’s not his money or his family’s he’s talking about but, rather, the fortunes his father and other earlier generation Rockefellers socked away as tax-exempt donations into a host of foundations that pursue the family’s special interest political agenda. That agenda includes everything from making a family wilderness of the Catskills-Delaware region to creating the networks of relationships permitting the family itself to invest in foreign markets, including oil and gas investments they would have us believe they are divesting themselves of. 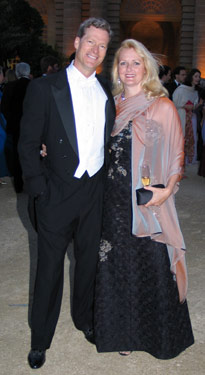 This brings us to Steven Clark Rockefeller, Jr., the elder Steven’s son and well connected fifth-generation member of the famous family. As I noted in my earlier article, Junior (pictured to the right with his wife Kimberly, both idolized by the New York Social Diary as “good examples”) is, like his father, is a big Asian fan. He is Rose Rock Capital (part of the Rose Rock Group headquartered at Rockefeller Plaza in Manhattan). This outfit is, through such vehicles as the Rose Rock Partners Fund, investing billions in China:

Steven C. Rockefeller, Jr., is Chairman and CEO of Rose Rock Capital, a family-owned holding company dedicated to fund management and real estate development in China. Family leadership is shared by his son, Steven III, and his nephews, Collin Eckles and Landon Eckles. The company’s current primary focus is on development, in partnership with Tianjin Innovative Finance Investment Company Ltd., of the Yujiapu Financial District in Tianjin’s special economic zone. Prior to founding Rose Rock, Mr. Rockefeller worked with numerous start-up companies across a range of industries, often serving on the Board of Directors. Industries represented by his focus included green energy and technology, educational television, specialty pharmaceuticals and robotics.

Junior, too, is heavily involved with Scenic Hudson (of Storm King infamy) and is busy bringing Chinese investment into favored areas of the Hudson Valley where development meets with family approval. Such relationships are behind his ability to ingratiate himself in Asian markets and make these sorts of arrangements (emphasis added):

Rockefeller has set up a venture with Tianjin Finance Investment Co to launch the funds, which aim to raise 5 billion yuan initially, including 2 billion yuan by the end of this year, the newspaper said.

Rose Rock, which controls 90 percent of the fund management venture, will be responsible for daily management and operation of the funds, while its Chinese partner will focus on government relationships, the article said.

Money raised will be used to build a landmark commercial property project in Tianjin’s financial district, while future investment will expand into other areas including infrastructure, culture and education, the newspaper said.

It’s nice when you can invest freely and your Chinese minority partners handle any problems with the Communist dictatorship, of course. It makes for a neat arrangement, especially when you’re trying get in on the ground floor of a Chinese oil and gas industry that’s now opening up to foreign investment “for the first time ever.” Notice, too, that very non-specific word “infrastructure.” It gets lost in all the hype, typified by this Rose Rock web page, but a little Googling of “Tianjin” plus “oil and gas infrastructure” yields this (emphasis added):

The Joint Venture represents the first time in history that a Western company has a stake in a Chinese petrochemical port. Tianjin port is the 5th busiest port in the world and 3rd busiest in China in terms of tons of cargo handled. Tianjin Port is a key logistics center in Northern China and has relations with over 600 ports across 180 countries and regions in the world.

The project in Tianjin is expected to take 24 months to complete and will consist of two 10,000 ton chemical berths. Projected terminal storage for products will be 800,000m(3) (approx. 211 Million US Gallons). The terminal will mainly be used for fuel oil, marine oil, gasoline, diesel, and benzene.   Total projected cost for the terminal project is 1.688 Billion Yuan (approx. $256M).

Rose Rock Infrastructure, Ltd. Is a subsidiary of Rose Rock Partners, LLC and is dedicated to development, ownership and management of infrastructure assets in China.  Rose Rock is also involved in real estate development, private equity investment management, and corporate and financial advisory services.  It has joint venture offices in Beijing and Tianjin and representative offices in Hong Kong.  Rose Rock is headquartered in New York.

Well…how about that? Junior isn’t just invested in infrastructure, but, specifically, oil and gas infrastructure and in a major way. The family is investing, not divesting, in oil and gas in China. It’s nothing less than startling chutzpah and hypocrisy for the Rockefeller family, and their henchman McKibben, to be lecturing us all about their superior virtues and “good examples” – the Rockefeller divestment story – when, in fact, they are putting major bucks into the industry abroad. They are fakes, phonies and frauds and it’s time reporters stopped being sucked into their self-serving narrative and started asking tough questions.