The Park Foundation’s favorite academic shill, made a splash with that Duke water study a couple of weeks ago but the most relevant facts weren’t addressed.

The routine is now` well-known. Wealthy special interest foundations throw money at their favorite academics to study their favorite issues. The academics, ever eager to build their reputations and pull in more money for research, take up a series of studies designed to appease their funders and create headlines that will attract the attention of other funders. The research, no matter whether junk or real, is always reported in such a way as to feed the controversy and continue the game. That’s what the Duke water study that got soil much attention over the last couple of weeks is all about.

There were a lot of hyped up headlines regarding the recent Duke water study. The study is entitled “The Intensification of the Water Footprint of Hydraulic Fracturing.” It was produced by the Nicholas School for the Environment at Duke University, a favored recipient of Park Foundation funding over the years to study the impacts of fracking. This particular study was funded by the National Science Foundation, but it picks up on the theme of earlier studies funded by Park, which is why the North Carolina university, where there has been little, if any, fracking to date, has been so interested in the subject.

The latest Duke water study produced a headline home run. HuffPost ran with “Fracking Water Use Skyrockets, Creating 1,440 Percent More Toxic Wastewater,” claiming “the controversial gas and oil drilling method threatens to exacerbate a looming crisis over water.” Duke itself ran with “Water Use for Fracking Has Risen by Up to 770 Percent Since 2 011.”

There’s nothing like good old fashioned lying with statistics to get attention. Despite everyone knowing how liars use statistics, the same trick still works every time, given our hopeless human nature, doesn’t it?

You can read the whole study here and a really nice analysis of it by my friend Dan Alfaro over at Energy In Depth. I want to focus, though, on a couple of facts getting almost no attention in the study. I want to take on the headlines, because they are incredibly misleading due to what is and dismissed.

First, you’ll find no mention whatsoever, in either the HuffPost dramatic version or the Duke news release, of water recycling as part of the fracking process. There are, moreover, only two brief mentions in the study itself, both of which are offered below (emphasis added):

In addition to these risks, treatment of the FP water to safely return and release to the environment is energy-intensive and expensive; thus, many operators are forced to either recycle the FP water onsite for future hydraulic fracturing operations or reinject it into deep-injection wells…

Overall, there have been calls to increase the use of alternative water sources such as brackish water or recycling FP water, minimizing the strain on local freshwater resources.

Operators are being “forced” to use recycling? What kind of comment is that? Cabot Oil & Gas recycles 100% of its water used in fracking because it’s easy, it’s economical and it reduces demands for fresh water. Nobody is forcing them to do it. It simply makes sense and the Duke water study doesn’t even bother to account for the numbers of producers doing it or the impact on water use. This omission is classic lying with statistics. If you’re not talking about recycling of water in a meaningful way and accounting for it in your analysis your study is junk. It’s that simple.

A second omission has to do with something I’ve addressed a couple of times (here and here) but is still poorly understood in the popular literature regarding fracking because the headline makers don’t want it known. It is the fact fracking adds more water to the hydrologic cycle than it uses. The Department of Energy indicates the following:

When one molecule of methane is burned, it produces two molecules of water vapor. When moles are converted to pound/mole, we find that every pound of methane fuel combusted produces 2.25 lb. of water vapor, which is about 12% of the total exhaust by weight.

Combine it with oxygen and we get 68,754,067 pounds of water; some 8,253,790 gallons worth in just the first year of operation, so the total water produced from combusting the gas from a typical well over its lifetime may be expected to be in the range of 16-21 million gallons based on what we know about Marcellus decline curves.

Yet, the Duke water study tells us the typical fracking job in the Marcellus requires only 27,950 cubic meters or 61,619,129 pounds of water. That’s but 7,397,254 gallons, less water than added to the hydrologic cycle by combusting only the first year’s production. Moreover, it represents less than half the water produced over the lifetime of the well and that’s without accounting for the water that flows back up the well and is recycled. Here’s how it stacks up, in fact: 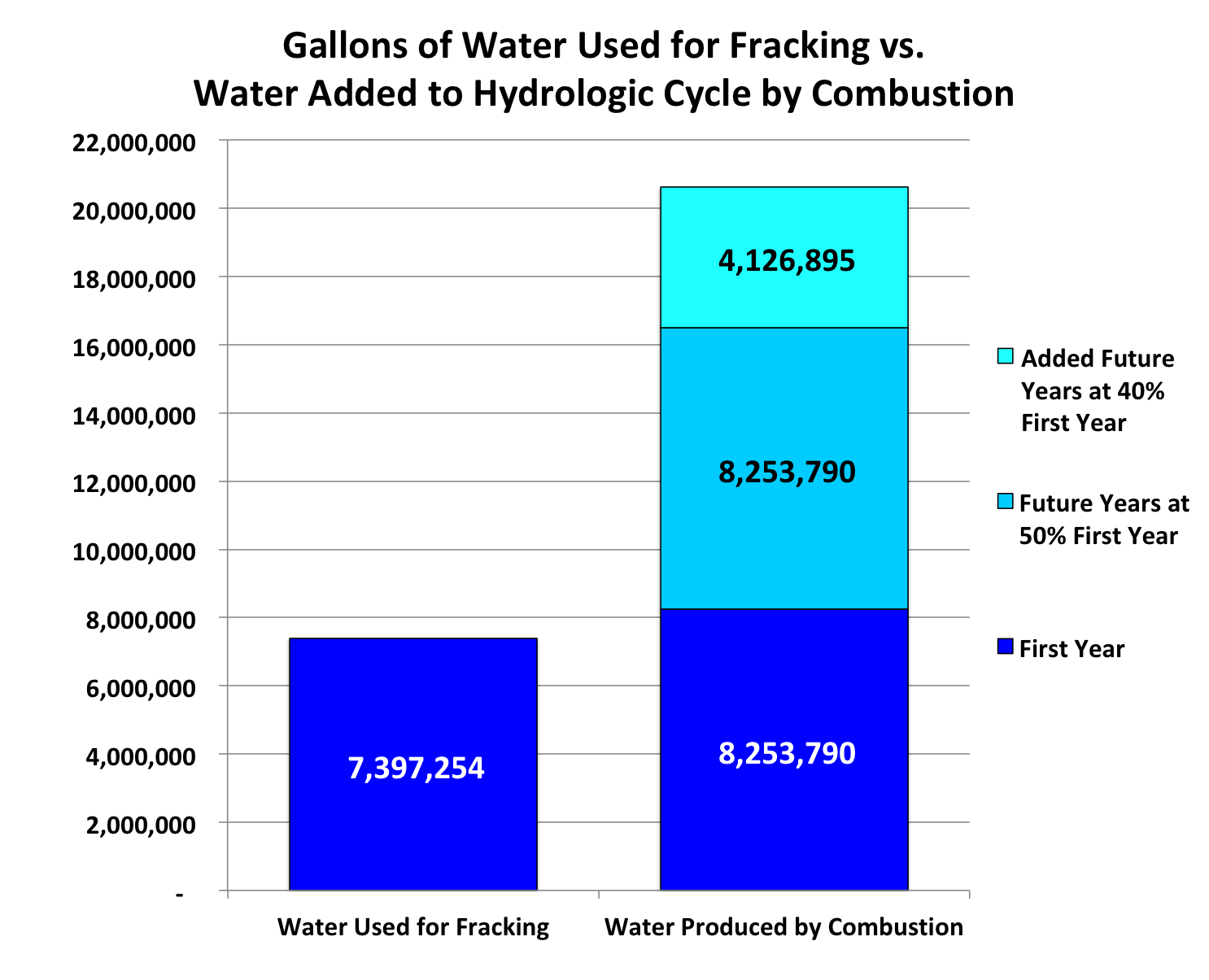 These are the facts the Duke water study doesn’t address and their HuffPost echo chamber would never repeat anyway. The render the whole thing irrelevant, not to mention the mention the fact we expect wells to require more water to frack when they’re producing more gas than ever. Take that fact into account combined the knowledge we’re recycling the water and adding more water to the hydrologic cycle than were taking and you a perfect rainstorm of facts and you’re left with a propaganda study of zero value in the real world. But, the Park Foundation is very pleased with the Duke Blue Devils. Their big fans.