Fracking opponents have never been high on accuracy and we have a funny illustration of it with another errant missive from Sharon Wilson at BlueDays.

Getting the facts right has never been much of a priority with opponents of fracking. Josh Fox set the precedent with his baseless suggestion fracking made a faucet flame in Colorado despite overwhelming evidence it was anything but true. Caught like a deer in the headlights by Phelim McAleer, Fox dissembled, claiming the facts to simply be irrelevant. He did the same when a NPR reporter asked an innocent question that ending up exposing the mythical $100,000 gas company offer that wasn’t.

Now comes TexasSharon Wilson at BlueDaze who was shamelessly attacking landowners for being arrogant the other day. This time she jumps to a different conclusion and, in that hasty decision, makes a careless assumption that should raise set off alarm bells among the fracking opposition about the soundness of their foundation.

Here’s the story that ran on Sharon’s BlueDaze blog the other day. We’re showing you the screenshot because she’ll have to take the original down soon if she has an ounce of integrity and we’re giving her the benefit of the doubt and supposing she does. 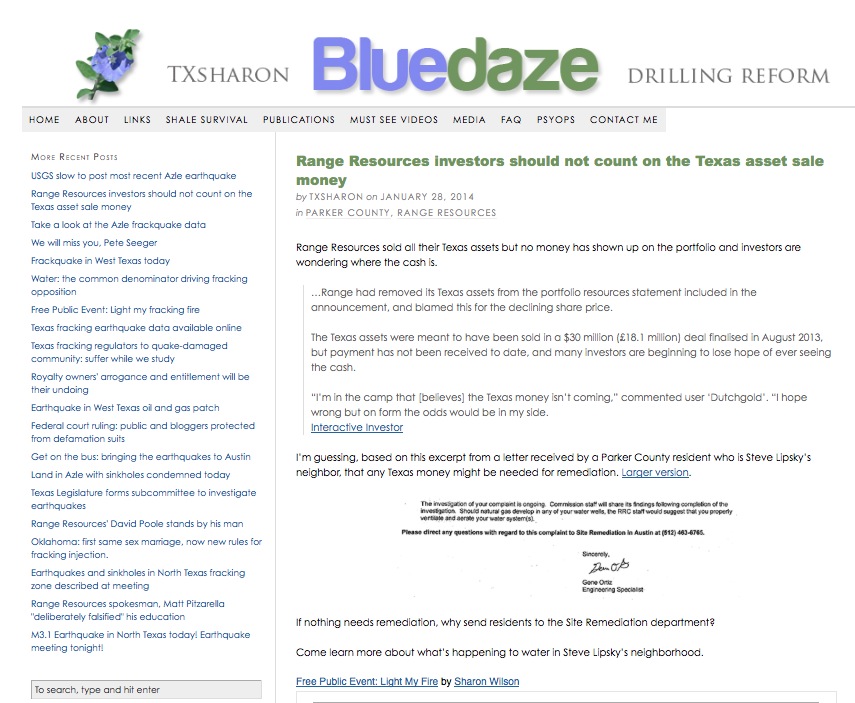 Here’s what the text says:

Range Resources sold all their Texas assets but no money has shown up on the portfolio and investors are wondering where the cash is.

…Range had removed its Texas assets from the portfolio resources statement included in the announcement, and blamed this for the declining share price.

The Texas assets were meant to have been sold in a $30 million (£18.1 million) deal finalised in August 2013, but payment has not been received to date, and many investors are beginning to lose hope of ever seeing the cash.

“I’m in the camp that [believes] the Texas money isn’t coming,” commented user ‘Dutchgold’. “I hope wrong but on form the odds would be in my side.
Interactive Investor

I’m guessing, based on this excerpt from a letter received by a Parker County resident who is Steve Lipsky’s neighbor, that any Texas money might be needed for remediation. 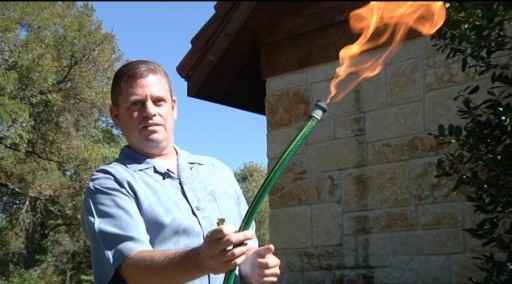 This style of research, if you can call it that, and reporting is typical of the fracking opposition. Today, in fact, Wilson has a story trumpeting a Colorado health study that has already been disavowed by the state, which was the source of the data examined. The Chief Medical Officer for the state reviewing agency, in fact, said this:

As Chief Medical Officer, I would tell pregnant women and mothers who live, or who at-the-time-of-their-pregnancy lived, in proximity to a gas well not to rely on this study as an explanation of why one of their children might have had a birth defect. Many factors known to contribute to birth defects were ignored in this study.

Yet, there is Sharon Wilson, offering this intellectual perspective to introduce her story on the study, which, of course, ignored the state perspective:

Like we need more evidence that hydrocarbons and chemicals associated with hydrocarbon production are harmful to humans. Any idiot knows that.

Wilson is hardly the only one doing it. Fox, as noted above, has developed an extended 15 minute career out of it, which is now waning faster than a speeding bullet. Most of the fracking opposition, in fact, uses this approach, cherry-picking studies and conclusions they don’t even understand to assert what it is simply not so. That is why their credibility has vaporized and why natural gas development is such an important part of our future that even President Obama has endorsed it, not to mention Democrat governors such as those of Colorado, California’s and Illinois. They get no traction anywhere in government except forlorn New York where madness reigns.

The situation is not likely to improve for Wilson and company. The fracking opposition is now relegated to the shrillest segments of society. Natural gas is unstoppable. They can repeat the same old lie as many times as they wish, but fracking, a long established process conducted post-drilling and which they keep suggesting is new and dangerous, has still never polluted a water supply anywhere in these United States.

That’s the key fact they can’t get around and why they rush ever faster to judgment every time some bit of news comes out they think might finally be the game changer. Rushing produces mistakes and they’re making more of them every day. Texas Sharon just made a big one. Will she acknowledge it? Will she pull the story down? Here’s the link. Let’s see how long it stay up in its current form.