[Editor’s Note: Facebook is into brainwashing these days, labeling it as fact-finding and using phony excuses to hide its own very political agenda.]

A friend recently posted information on Facebook that the Texas blackout situation was a “literal perfect storm test if an all-renewable energy plan would work”.  The Facebook police posted a warning that there was “missing context” but I will explain why there was missing context in the missing context claim. 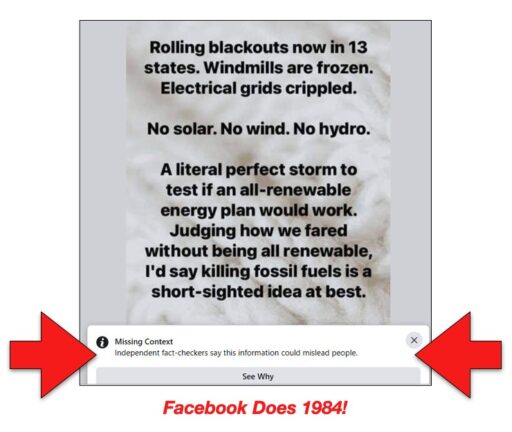 I while away my time in retirement publishing a blog on New York environmental and energy issues and have written extensively on New York’s attempts to address climate change by reducing greenhouse emissions.  For this context I wrote a post explaining the lessons that should be learned by New York in their quest to save the planet and another responding to a newspaper article asking whether something similar could happen in New York.

Short answers: New York has to be very careful with their plans or they will end up in the same situation as Texas in the future and New York’s electricity market is currently structured differently than Texas so it is very unlikely that the same thing could happen today.

The Facebook missing context check claims that because failure of natural gas and other fossil sources was the primary problem with the blackouts this February it is unfair to claim this was an appropriate test of an all-renewable energy plan.  However, their arguments fail to consider a couple of things. 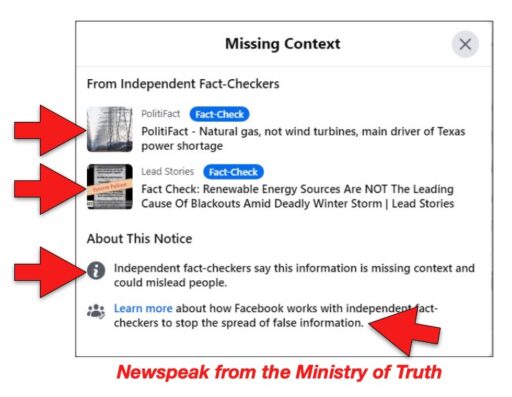 In the first place the claim in the post was that this was a test of an all-renewable energy system.  One way to consider generating availability is the capacity factor which is the actual electricity generated divided by the maximum electricity possible.   If we look at the capacity factors for Texas generation types during the crisis, midnight 2/15 to noon 2/18, then we can try to determine the cause of the crisis. None of the energy sources performed particularly well.

It is clear that in all-renewable energy system a lot would have to be done to replace the lack of wind and solar generation.  Note that 30,000 MW of wind at a cost of some $70 billion producing 650 MWs when it was desperately needed is a failure on the magnitude of the Maginot Line in World War 2. My first problem with the fact checkers is that even though the fossil plants failed to do well in this situation, the resources needed to keep the lights on in an all-renewable energy system for a future situation would be so immense and so expensive that they may not be feasible and that was the point of the claim.

In my opinion the actual root cause to the problem is that the Texas energy market only pays generators when they produce power.  Most other electric markets pay generators for capacity or the ability to provide electricity when it is needed.  Texas had a very similar situation ten years ago which also led to blackouts.  If you don’t pay generators to be available in critical if rare situations they simply will not invest for those periods.   In this case, the wind mills could have spent extra for cold weather upgrades, the natural gas infrastructure could add heat tracing so equipment did not freeze, and the nuclear plants could have protected their water systems and this catastrophe could have been avoided.  All of that would have been done if the market paid for capacity.

There is a bigger problem associated with the lack of a capacity market in Texas that the Facebook fact checkers completely ignore in their missing context claim.  A former electric utility planning engineer described his impression of the problems that lead to the debacle and noted that the purpose of the payment for energy only market strategy was “to aid the profitability of intermittent wind and solar resources and increase their penetration levels.” Put another way, because renewables don’t provide capacity that means having a capacity market disadvantages renewables.

I conclude that the Facebook fact checkers were more interested in damage control against claims that renewable energy has weaknesses than objectively addressing the claims.  The original claim is that an all-renewable energy system would most likely fail even more under the conditions that occurred and that has nothing to do with the fact that fossil fueled sources failed in this event.  The other flaw in their fact check is that the ultimate cause of the failure, payments only for energy, is the preferred approach for renewables advocates.  If they get their way blackouts will be inevitable.

And, if you don’t think we’re losing free speech as social media and government merge into one totalitarian enterprise where the former serve as the 1984 Ministry of Truth ideological enforcers for the latter, read those Facebook posts again. We are living in extraordinarily dangerous times.