The US Department of Energy has just released the results of a study indicating no evidence of fracking fluid migration to groundwater aquifers.

A US Department of Energy study by its National Technology Energy Laboratory was released yesterday and it’s the good news everyone familiar with the industry and its history expected, but it predictably disappointed a lot of fractivists who are already moaning, groaning and making excuses. The report entitled “An Evaluation of Fracture Growth and Gas/Fluid Migration as Horizontal Marcellus Shale Gas Wells are Hydraulically Fractured in Greene County, Pennsylvania,” is filled with detailed data and superb charts. It speaks for itself, but is somewhat technical. The end result is this; there is no evidence of fracking fluid migration anywhere near water supplies.

Here are some of the highlights and a key chart from the report (emphasis added):

“This field study monitored the induced fracturing of six horizontal Marcellus Shale gas wells in Greene County, Pennsylvania. The study had two research objectives: 1) to determine the maximum height of fractures created by hydraulic fracturing at this location; and 2) to determine if natural gas or fluids from the hydraulically fractured Marcellus Shale had migrated 3,800 ft upward to an overlying Upper Devonian/Lower Mississippian gas field during or after hydraulic fracturing.”

“The Tully Limestone occurs about 280 ft above the Marcellus Shale at this location and is considered to be a barrier to upward fracture growth when intact. Microseismic monitoring using vertical geophone arrays located 10,288 microseismic events during hydraulic fracturing; about 40% of the events were above the Tully Limestone, but all events were at least 2,000 ft below producing zones in the overlying Upper Devonian/Lower Mississippian gas field, and more than 5,000 ft below drinking water aquifers.” 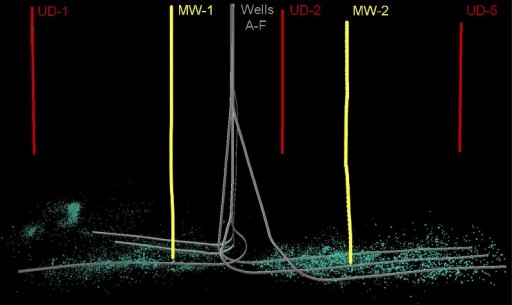 And, here is some more from the conclusions:

Here is another chart illustrating the great depth separating the layers where fracturing took place from groundwater aquifers: 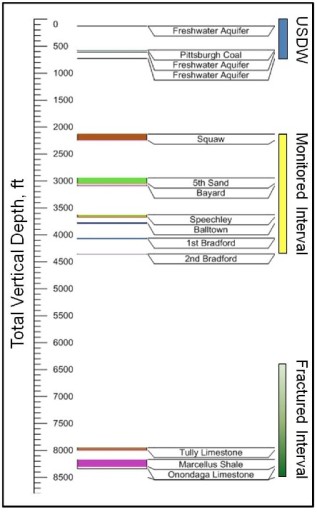 Notice the great distance between the fracturing level and the aquifers. The study demonstrates nothing happened anywhere near the monitoring levels, let alone the levels where the aquifers are located, proving, yet again, what EPA and several states have repeated for years – there is no evidence of fracking fluid migration into water supplies.

This has forced the purveyors of doom and deliberate lies to the contrary of the evidence to take the Josh Fox cop-out of relying upon methane and drilling issues as if they were fracking related when they are not. They all end up there eventually, of course, but here is what the Delaware Riverkeeper said in August of last year to a fawning interviewer:

Getting gas out of shale is done by fracking, requiring an average of 5 million gallons of water for each well — poisoned with an unknown slurry of dangerous chemicals and forced into the earth to fracture the rock that holds the gas…The choice is not drilling and fracking or shivering cold and in the dark – the choice is drilling and fracking with all of its toxic pollution and climate changing devastation or clean energy from the sun, wind and earth that gives us a safe, healthy and bright future for all.

And, here is what she says now:

“There are a whole wealth of harms associated with shale gas development” separate from fracking, said Maya K. van Rossum of the Delaware Riverkeeper group. She mentioned methane gas leaks, wasteful use of fresh water, and air pollution, and said the DOE study confirms a point that the Riverkeeper has been making: that faulty well construction is the root cause of most problems, not natural geologic migration of chemicals.

Maya, like all fractivists, wants it both ways; she wants us to think fracking is dangerous until it’s proven otherwise and then, well, it must be something else, with the predictable lies about having always said that. Fortunately, the evidence is forcing these admissions more often than ever lately. Another study released over the weekend says much the same as this one (report here). Fracking fluid migration to water supplies doesn’t happen. Period.

11 thoughts on “No Evidence of Fracking Fluid Migration to Aquifers”