When an anti-fracking protest camp is evicted from the premises of an English drill site, they chose to dig in and build tunnels.

Digging a hole is hard work. Last summer, I needed to dig out some old, never identified object from my back yard that had collapsed and formed a small sinkhole. Using a shovel, I went to work until I was about 6 feet deep in a 9 feet round hole. Throughout the process, I kept coming across a network of tunnels being used by pesky moles and was amazed at how (and hole) efficient they were while I was plugging away one shovel at a time.

So, can you imagine the amount of work that was put into a labyrinth of tunnels under a fracking site in Coldharbour, Surrey in England? This massive tunnel network, going as deep as 300 feet, was created in about three months using shovels and spades. You have to admire the work involved in this feat, I just wish that they could have put forth the energy to read why they are digging down the wrong hole (pun intended). 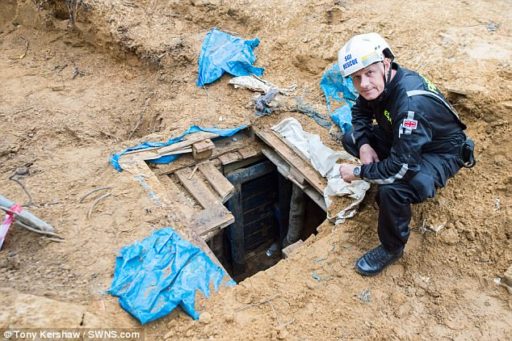 Europa Oil and Gas was given permission to carry out 18 weeks of exploratory drilling in the area to determine if the site was viable for oil and gas development. Activists in the region are notoriously over the top (or is under the bottom) over there, Readers may recall we discussed earlier how they compared police to Nazi SS guards.

Naturally, after news broke about oil company interest in the area, they did what they any fractivist organization worth their weight in salt would do; they set up a camp. When they were told to evacuate the premises, they refused and dug in.

Three months later, behind a pallet fort, rescue teams were brought in to fish these mole people out of the tunnels. This is as dangerous as the tunnel construction, which is something I learned from my military confined space training. Not only could the ill-constructed underground tunnel collapse at any point, rescuers face low oxygen levels, and the possibility of being captured themselves.

The situation could have gone very badly for many, so the operation actually was more of a rescue scenario. It looked like one, as the protestors had to be tied to stretcher boards and dragged out. The self-satisfied vapid smile on the face of this rescued protestor after having endangered others in the course of her virtue-signaling says it all about the selfishness of fractivists, doesn’t it?

Unbeknownst to me, there was an actual manual for protesters to follow, Disco Dave’s Tunnel Guide. It describes in detail how to build out these tunnels and prefaces the instruction with why and with historic references to when they became tools of the protestor trade.

“In the world of NVDA (Non Violent Direct Action) there are few defence [sic] tactics that can compare with the protest tunnel. Dangerous, laborious and time consuming, tunnelling [sic] is the ultimate and desperate tactic of desperate people in desperate times.”

The Green Party Member of European Parliament, Keith Taylor, issued a statement on the ordeal.

“The safety and wellbeing of the protesters currently in tree houses and locked-on in tunnels at Leith Hill must be prioritised above all else and I am urging the authorities to exercise restraint in the handling of this eviction so that we do not have a repeat of the accusations of violence seen at Balcombe in 2013. The people at these protection camps are defenders of the earth and they deserve medals.”

“We simply must keep oil in the ground, no amount of pragmatism about our reliance on fossil fuels will save us from the impact of climate change when rising global temperatures hit a 2 degree increase. That is the reality. We need to be investing in substitutes for oil and oil products now, not sometime in the future.”

It was all meant to delay and waste Europa Oil and Gas’ time. They only had permission for a finite timeline to explore, so this protest — that risked the lives of both themselves and their rescuers — was all about wasting time and money. No medals are in order; just some self-reflection and reevaluation of priorities.  Or, perhaps there’s a new cause to be pursued here …”keep them in the ground.” Just sayin’ of course.

For more photos visit this DailyMail link and for a timeline of events, look at this page on DrillorDrop.