The DRBC lawsuit now before the 3rd Circuit Court of Appeals will decide if states surrender their sovereignty to bureaucracies when they enter compacts.

Late last month, I reported here on the status of the DRBC lawsuit, which, following some blistering observations from the district court judge about the DRBC position, was kicked upstairs to the Third Circuit Court of Appeals. It was headed there regardless of the outcome and got there roughly a year ahead of time. Now, the case will be decided on its merits. The court will decide if DRBC bureaucrats can expand their definition of “project” to include whatever they choose and whether they can impose moratoriums on what they choose by merely pretending to work on regulations ad infinitum. The court will decide if a bureaucracy created by compact has sovereignty over the compact itself and those who created it. It’s a case that should compel every state that cares about its soverignty to get involved. 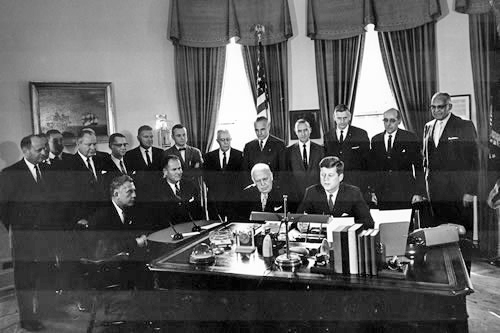 Signing of the Delaware River Compact in 1961. Who knew then it would lead to creation of an oppressive regional land use agency?

The DRBC lawsuit was prompted by three outrageous actions taken by the Delaware River Basin Commission. The first was it’s flagrant abuse of the term “project,” which has always determined what it could regulate. The term is central to the interstate compact that created the agency. Following decades of common understanding that “project” meant a water project as in a well, a reservoir or a wastewater disposal project, the DRBC, under its last Executive Director’s ideological leadership, blithely expanded the term to include land uses having only indirect connections to water; things such as gas well pads and pipelines. It’s mission creep; jurisdictional overreach by an unaccountable agency that ultimately results in the effective confiscation of private property.

The second outrage was to then assert, because it was developing regulations, that the agency could impose a moratorium on gas drilling even though there has been no movement with respect to those regulations for nearly six years. “We’re still thinking about it” is no excuse. It amounts to neither permitting or denying activities, so as to avoid bearing any legal responsibility for anything. It’s hard to imagine any less ethical behavior by a governmental agency, except that there is a third outrage.

That third outrage is the unholy alliance made between the DRBC and the Delaware Riverkeeper, which is little more than an arm of the anti-growth William Penn Foundation. The DRBC, astoundingly, even took funding for gas drilling related research from the William Penn Foundation as the latter was financing the Riverkeeper and as it, in turn, was suing the DRBC over gas drilling issues. Meanwhile, the DRBC was stacking its committees with Riverkeeper associates, and using legal counsel associated with other Foundation funded enterprises. The DRBC Executive Director even joined the Foundation board upon retiring for a time and then secured a job at still another Foundation enterprise. This isn’t just winking and nodding on an interstate scale; it’s political corruption.

Delaware Riverkeeper’s tribute to ally Carol Collier upon her retirement from the DRBC. This unholy alliance between two entities funded by the William Penn Foundation was a disaster for Upper Delaware River landowners.

While these are the actions that prompted the DRBC lawsuit from the perspective of aggrieved landowners and residents, there is, nonetheless, much more at stake today. Indeed, every state involved in interstate compacts of any sort should be taking a long hard look at this case and thinking about participating on an amicus basis. Why? Because it’s state sovereignty that is at stake. Consider the following:

Every state involved in a compact is, therefore, threatened. The Court of Appeals will decide whether, and to what extent, States entering into interstate compacts cede their sovereign authority.  It will determine how far a bureaucratic agency created by states can go in interpreting its way to control over those states. Ultimately, it will define the power of an interstate water resources management agency to regulate land use and abscond with not only state sovereignty, but also private property. No matter could be more serious or more deserving of legal support from other states (in and out of the Delaware River Basin), landowner groups or anyone else valuing American liberty. It’s that serious.