The radical nuns who are making a spectacle of themselves opposing the Atlantic Sunrise are as wrong as wrong can be and are hypocritical natural gas users.

If you searched the Internet for news accounts and images of the recently constructed outdoor “chapel” that was built directly in the path of the soon-to-be-completed Atlantic Sunrise pipeline, you would probably think that it sits alone on some consecrated land in a bucolic pasture miles away from civilization. Not so. 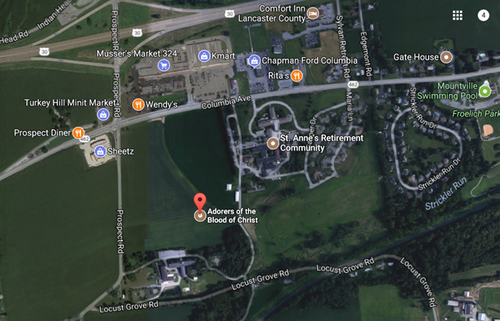 But, the chapel, which was carved out of a corn field on a 23-acre plot owned by the Adorers of the Blood of Christ order of nuns in Lancaster County Pa, is actually surrounded by a Wendy’s fast-food restaurant, a Ford dealership, a Sheetz gas station and the St. Anne’s Retirement Community, which the order also owns.

The makeshift chapel is one of several structures hastily erected by the anti-pipeline activist group Lancaster Against Pipelines—including one they call “The Stand” in tribute to the #NoDAPL protests at Standing Rock—in an effort to slow down construction of the Atlantic Sunrise pipeline. While all of the structures are easily torn down, the activists hope they will “serve as the center of an encampment of people who will be there permanently.”

The activists built the chapel to bolster a religious freedom lawsuit that the nuns recently filed against the Federal Energy Regulatory Commission claiming the pipeline would violate their religious freedom. Specifically, the nuns “believe that God calls humans to treasure land as a gift of beauty and sustenance that should not be used in an excessive or harmful way.”

Ironically, once it’s completed, the pipeline will be more in line with that belief than all of the other man-made structures on the nuns’ property.

According to Williams Partners which is building the pipeline, “there will be very little evidence that a pipeline is present” once it is safely buried three to five feet below the surface. The same cannot be said for the St. Anne’s Retirement Community or for the 14 acres that the nuns had hoped to sell to a developer who planned to build housing for low- and middle-income seniors.

To be sure, the order is well within its legal and ethical rights to develop their land any way they see fit, since that area is designated as a high-density residential zone in the township’s future land-use plan. But their embrace of multi-family residential construction would suggest that their lawsuit is less about their religious right to “treasure land as a gift of beauty,” and more about Lancaster Against Pipelines’ embrace of the “Keep It in the Ground” movement’s activist agenda.

This isn’t the first time anti-pipeline activists have sued on religious grounds to stop pipeline construction. Last February, the Standing Rock Sioux tribe argued in court that “the mere presence of the oil in the pipeline [under Lake Oahe] renders the water spiritually impure.” They soon withdrew that suit after it was pointed out that oil had been flowing in pipelines under the lake since 1985.

It’s unlikely that the nuns’ lawsuit will fare any better.

Editors Note: Once again, we have to point out what so many articles on this subject, including this excellent one, don’t mention; that these radical nuns are natural gas users. They not only heat their life care community with natural gas but also promote the fact, blithely ignoring the hypocrisy of opposing the delivering the same natural gas benefits to others who will be served by the Atlantic Sunrise. It is total “nunsense,” if you will, an act of posturing more typical of adolescents than supposedly mature religious women. Enough already with these high school antics. And, let’s tell the full story every time this one comes up; that these nuns need to go back and reread Matthew 7:4, as they seem to have not understood:

How can you say to your brother, ‘Let me remove that splinter from your eye,’ while the wooden beam is in your eye?

Yes, Sisters, turn off your own natural gas and stop promoting it if you think a pipeline is so terrible and an offense against God. Otherwise, don’t engage in theatrics designed to signal your virtues by opposing those who would do no more than what you have done.

8 thoughts on “Enough of This Nunsense: These Atlantic Sunrise Antis Use Gas!”