Energy security is everything, as the Wuhan Virus is showing. Borders matters for health. We must be economically self-sufficient and fracking allows it.

The Wuhan COVID-19 virus has demonstrated so many things as I wrote here two weeks ago, but the big one is borders. When President Trump halted travel from China when it became clear the Wuhan virus threatened more than Wuhan, there were howls of protest from Joe Biden and others. When he did the same withe EU, the howls grew louder. But, the President was exactly correct as it turns out. Borders matter in a huge way. We need the ability to keep other people out at times and even Rhode Island is learning that it seems. But, borders are only meaningful if you can afford, by your self-sufficiency, to keep others out and energy security secured by fracking is the key. 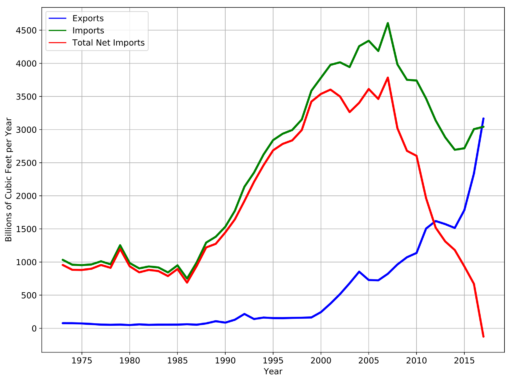 The fruits of fracking that have yielded energy security

Jude Clemente addresses this with a wonderful Forbes article:

Since 2008, U.S. crude oil production has been up 165%, and gas increased nearly 70%. Fracking now accounts for 80% of U.S. oil and gas production. The U.S. is an energy powerhouse and produces more oil than Saudi Arabia and more gas than Russia. In 2019, we exported over three million barrels of crude oil per day and more than doubled gas exports. These exports mean rising prosperity in the U.S., a better trade balance and meeting the desperate needs of energy-impoverished nations across the world…

[F]racking is the basis of our once unimaginable energy self-sufficiency and net exporter status. A fracking ban puts our energy future in the hands of OPEC members and Russia – countries seeking to dominate global supply. U.S. allies need our supplies to counterweight growing Russian influence over energy markets. The International Energy Agency has the U.S. accounting for 85% of new global oil production and 30% of new gas through 2030. U.S. exports can constrain Russian political interference, thus: “Fiona Hill says that she heard Putin describe American fracking as a ‘great threat’ to Russia.” In Massachusetts, “Shoot yourself in the foot” energy policies forced the state to import LNG from U.S.-sanctioned Russia in the two previous winters.“

There’s not much I can add to that but read the whole article for some additional perspective on politicians who suggest we’d be better off without borders and fracking. They’ve been proven wrong in the biggest possible way in the shortest amount of time imaginable. And, if you disagree on the border part, well, talk to the Governor of Rode Island:

“As the data has changed, the situation has changed. Unfortunately, the rate of infection we’re seeing in New York City — unfortunately, we’re seeing that same rate of infection in other places, Connecticut, New Hampshire, New Jersey, etc.,” Raimondo said during a regular briefing at the State House in Providence. “So, yesterday, to keep all Rhode Islanders safe, I signed an executive order imposing a quarantine on all visitors from any state, by any mode of transportation who are coming in Rhode Island for non-work purposes and plan to stay.”

Raimondo confirmed she spoke with Cuomo on Saturday following her broadening of the quarantine order. However, she also expressed some irritation that he’d publicly lashed out at Rhode Island’s policy.

“I did talk to the governor of New York yesterday after I had already taken my action,” she said of the conversation with Cuomo. “We chatted about it. If he feels it’s important for him to take credit go ahead, I’m going to keep working here to keep Rhode Islanders safe,” she said. “I will say I think it’s odd that Gov. Cuomo is focused on this sort of politics at a time that we’re fighting disasters.”

Raimondo also dismissed Cuomo’s talk of a lawsuit against the earlier policy. “He’s welcome to sue if he likes. I think he would have a very hard time because I’m on firm legal ground.”

Well, that’s an interesting spat but, back in early February, Raimondo was named National Co-Chair for Mike Bloomberg’s 2020 Presidential Campaign. This was simultaneous with Bloomberg telling Facebook followers Trump’s travel ban was “an attack on families and an insult to our heritage,” but, hey, we all learn as we go, don’t we? Raimondo is now a fan of borders. Maybe she’ll learn fracking isn’t so bad either. It delivers energy security, without which those borders are meaningless.

1 thought on “Energy Security Matters, As It Turns Out, And Fracking Is Key”