Energy independence flows directly from the progress of the glorious shale revolution. The U.S. has gone from dependence to independence in only 12 years.

The Energy Information Administration (EIA) put out a chart last week that depicts how we got to energy independence. It’s a combination of things, of course. Energy efficiency played a role. So did renewables. But, it’s natural gas, via the shale revolution, that’s been the biggest factor by far.

The story is revealed in this one chart, which I have modified to show what’s happened since about 2007 when the shale revolution was launched (I added the pink): 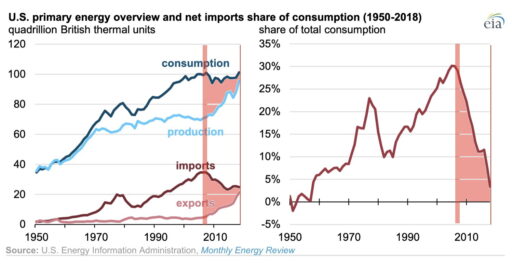 That was a mere 12 years ago and look what the shale revolution wrought. We now produce the majority of the world’s natural gas, in fact, thanks to fracking. This hasn’t stopped Presidential candidates such as Elizabeth Warren and Bernie Sanders, though, from promising to end it all the minute, God forbid, they’re elected.

This second EIA chart (modified to show onset of the shale revolution) is also illuminating: 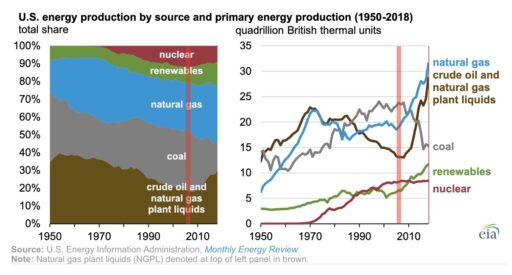 Notice how the shale revolution, starting in roughly 2007, created a resurge in natural gas, crude oil and natural gas liquids. This is what made the difference in energy independence.

Finally, take a look at this modified chart: 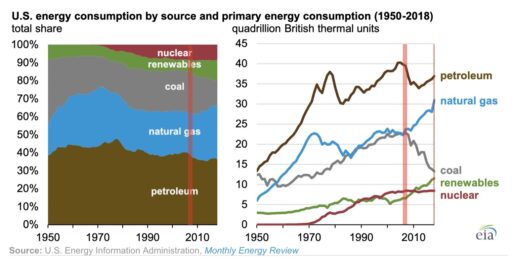 Notice how natural gas took off in 2007. Consumption of oil came a bit later, following the economic recession and the development of the Bakken via fracking. Natural gas consumption has increased by roughly five times since 1950.

Renewables have also grown, by approximately four times since 1950, but those numbers presumably include hydroelectric power, which, for any number of reasons has relatively little room to grow.

Petroleum consumption has grown by about three times, but is still king of the hill. Altogether, natural gas and oil, now delivered mostly via fracking, together account for about 65% of energy consumption today compared to about 60% in 1950 and 2007.

Put it altogether and it’s easy to see what the shale revolution has done for America and it is simply astounding.

7 thoughts on “Energy Independence: The Charts That Tell Us Everything”