Roger Caiazza talks about energy efficiency and how you can tell if your house needs improvement; it’s all about the frost on the roof.

One of the reasons we have a dog is that I cannot avoid the need to take him out for a walk every day.  I don’t take along an audio system so the walk is a time for reflection and observation.  This morning’s observation is that when the frost is on the roofs you can tell who has good insulation and who doesn’t.  That lead to the thought that maybe I could do a “study” to determine how many houses in our neighborhood appear to be energy efficient and how many are not. 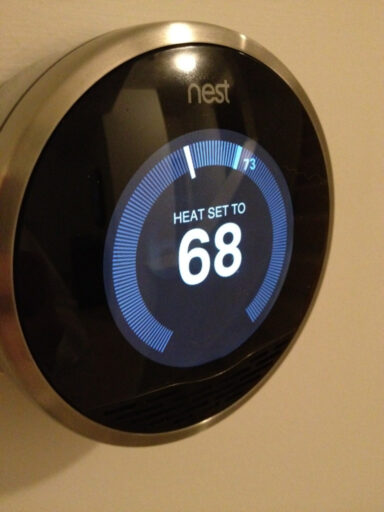 One of the primary presumptions of the Climate Leadership and Community Protection Act Energy Efficiency and Housing Advisory Panel is that the deep de-carbonization goals can be met by reductions in energy service demand by more efficient building shell and weatherization measures.  Those measures have been targeted for years so I have always wondered how many homes still could be updated to get the biggest demand reductions for the investments.

On July 18, 2019 New York Governor Andrew Cuomo signed the Climate Leadership and Community Protection Act (CLCPA), which establishes targets for decreasing greenhouse gas emissions, increasing renewable electricity production, and improving energy efficiency.  It was described as the most ambitious and comprehensive climate and clean energy legislation in the country when Cuomo signed the legislation.  I have summarized the schedule, implementation components, and provide links to the legislation itself at CLCPA Summary Implementation Requirements.

I am following the implementation of the CLCPA closely because its implementation affects my future as a New Yorker.  Given the cost impacts for other jurisdictions that have implemented renewable energy resources to meet targets at much less stringent levels, I am convinced that the costs in New York will be enormous and my analyses have supported that concern.  The opinions expressed in this post do not reflect the position of any of my previous employers or any other company I have been associated with, these comments are mine alone.

The Climate Action Council (CAC) is charged with preparing a scoping plan to achieve the goals of the CLCPA.  The CLCPA mandates that in order to “provide recommendations to the council on specific topics, in its preparation of the scoping plan, and interim updates to the scoping plan, and in fulfilling the council’s ongoing duties”, the CAC (§ 75-0103, 7) “shall convene advisory panels requiring special expertise and, at a minimum, shall establish advisory panels on transportation, energy intensive and trade-exposed industries, land-use and local government, energy efficiency and housing, power generation, and agriculture and forestry”.

Since the start of the implementation process the CAC realized that another advisory panel specifically addressing waste was appropriate.  You can follow the progress of this work at the State’s Climate Act webpage.

The Energy Efficiency and Housing Advisory Panel is, in my opinion, doing the best job addressing issues associated with their objective to “develop recommendations specific to the buildings sector for emissions reducing policies, programs, or actions that contribute to achieving the statewide emissions reductions established in the CLCPA, for consideration by the Climate Action Council for inclusion in the Scoping Plan”.

The Panel’s target is to “develop buildings sector-focused recommendations for emission-reducing policies and actions to achieve approximately 31-39% emission reduction in buildings by 2030 (and 85-93% emission reduction by 2050), from 2016 levels”.  (As an aside, these emission rate targets are subject to refinement because the CLCPA has its own unique emissions accounting approach and they have not made up the numbers yet.)

The following slide is an overview of the residential housing sector profile of New York prepared by the New York State Energy Research and Development Authority (NYSERDA).  It was included in the Energy Efficiency and Housing panel presentation on October 16, 2020. 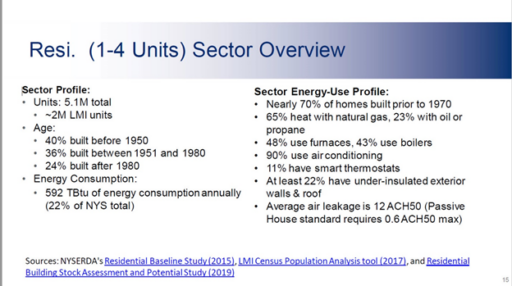 The hypothesis of this citizen science experiment is that it is possible to categorize building shell and weatherization effectiveness by comparing the appearance of frost on the roofs of similar homes to give a first order estimate of the potential for additional energy savings in this sector.

The following picture illustrates the difference between one home that appears to have better weatherization and insulation than another home.  This photo was taken at 8:09 AM on November 13, 2020.  A New York State Mesonet meteorological monitoring site several miles south showed that the temperature went below freezing about 9:00 PM the previous evening and that the temperature went above freezing around 7:00 AM.  By the time I got home around 8:15 AM there was a noticeable difference in the frost on my own home due to melting.

I categorize the house on the left as one that has inadequate insulation and weatherization.  Note that the entire roof is mostly frost free.  You can see under the roof over the garage and the area along the eaves has frost.  The house on the right appears to have adequate insulation and weatherization.  The entire roof has an even layer of frost. 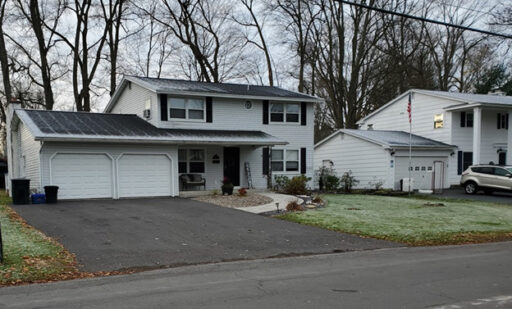 One of the notable things about this survey was there was a third category as shown in the following picture.  My assistant Gus points to the one-story section of the house that has much less frost than the two-story section.  My own home showed  two different frost patterns too.

Unfortunately, I did not take a picture of my house because the frost had melted too much but the frost-free zone is located over my front porch.  I did not put insulation there because it was not enclosed but the roof pattern shows that something should be done there to improve the house energy efficiency. 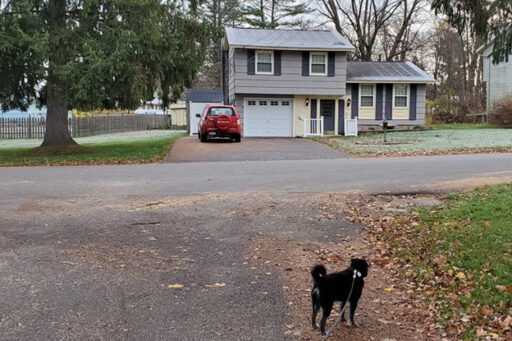 For my home we meet the insulation standards for the attic, the exterior walls have been insulated, all the windows and doors have been upgraded, and we had a company come and do a leak check.  They noted the problem with porch, put in a barrier and resolved a couple of other issues.  Nonetheless, there still is an issue that needs to be addressed but the relative benefit for the cost will mean a small incremental reduction in energy usage.

These survey results suggest that there are limits on the potential energy savings reductions because many home owners have already implemented insulation and weatherization measures.  Only 10% of the homes in this neighborhood appear to have large potential reduction where the investments will produce the greatest reductions.  Half of the homes apparently could use more measures to improve energy efficiency but those investments will not have as large a cost benefit ratio.

It may be that there is a reason that there isn’t as much insulation in the roof.  For example, the house in the last picture may have cathedral ceilings which are much costly to insulate.  This problem occurred over the garages of most of the homes in this neighborhood with this problem showed up and that is another more complicated and costly problem to resolve.  For the remaining 40% of the homes, any further energy efficiency improvements will likely show much less potential for reductions at much higher costs.

Finally, I want to suggest that this is a methodology that shows promise for quick, broad survey results of actual energy efficiency potential.  The visual appearance of residential homes clearly indicates the insulation and weatherization standards.  Importantly, it is not just frost that could be used as the visual marker.

Light snow probably is a better indicator because frost patterns can be influenced by over-hanging trees.  Another indicator is icicles.  Moreover, this is simple enough that anyone can collect the data.  All you need is a camera, a car and the right conditions to target homes that could provide the greatest energy efficiency improvements.

1 thought on “Energy Efficiency Has Its Limits: No Frost Is No Gain”